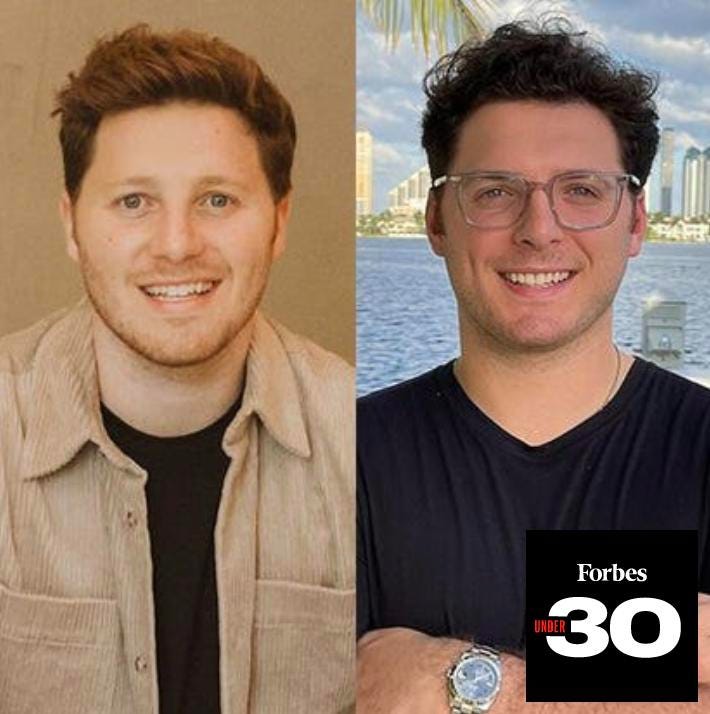 2021 will be marked not just as the year of the Great Crypto Awakening, punctuated by record prices and eye-watering valuations for blockchain startups, but perhaps more importantly, by a fresh wave of talent flowing into the ever growing industry.

This year’s Forbes Under 30 class welcomed 21 blockchain leaders and innovators, nearly twice as many as last year. Among them are developers, artists, media executives and venture capitalists —building out and investing in the next iteration of the worldwide web, creating novel non-fungible assets, trailblazing crypto philanthropy and disrupting global finance with technology popularized by bitcoin.

In honor of the 10th anniversary edition of the Forbes 30 Under 30, we’ve also picked 30 star alumni for the Under 30 Hall of Fame. Representing crypto are 29-year-old founder and CEO of cryptocurrency exchange FTX, Sam Bankman-Fried, currently the richest under-30 on the planet, worth $26.5 billion, and 27-year-old co-founder of Ethereum, Vitalik Buterin, the youngest known crypto billionaire with a $1.4 billion fortune.

If crypto is your only passion, scroll down to see this year’s honorees.

The Bruch brothers are out to build the Amazon of NFTs. They are creating a marketplace for people to buy, sell and trade NFTs of established brands, sports teams, movie characters, cartoons and other much-loved, old-line media content. Think digital collectibles. Max, 24, and Zach, 28, recently partnered with ViacomCBS and raised a massive $50 million round led by hedge fund billionaire Stevie Cohen, which valued the marketplace at $333 billion.

Caruso is an investment partner at Paradigm, the crypto-focused firm founded in 2018. Caruso has helped make investments into companies such as Axie Infinity, AI Arena and several more that are unannounced. Previously, she was an engineer at Google, where she worked on a machine learning research team studying user behavior. In parallel, she worked at Bessemer Venture Partners part-time as an investor focused on frontier tech: crypto, machine learning and quantum computing.

Madfes is a partner at Tribe Capital, a $1.5 billion venture firm where he leads crypto initiatives. He’s led investments in Akash Networks, Eternal Return, Lit Protocol, Mnemonic, Titan, Visor Finance and WeMeta, among others, while helping the firm develop a strategy that includes long-term hold positions in liquid coins and tokens, and direct involvement with DAOs and decentralized communities. Madfes previously invested in crypto projects on behalf of a European family office, building a $100 million-plus portfolio.

Fueled by the thesis that crypto would become a legitimate asset class, Michael Ippolito and Jason Yanowitz launched Blockworks, a news site for investors in digital assets that they call “the Bloomberg for crypto.” Since launching in 2018, they’ve expanded to run one of the largest crypto podcast networks in the world, as well as global conferences and a daily newsletter. They’ve bootstrapped the entire business and are expecting $10 million in revenue this year.

Emily Yang has dedicated her life to NFTs for good. Earlier this year she sold a DeFi animation for $525,000, and with the sale created the Stand With Asians Community Fund to support the AAPI causes. She’s since donated over $700,000 to the fund and founded PleasrDAO, an NFT collective for charitable causes like purchasing Edward Snowden’s NFT for $5.5 million and donating the proceeds to the Freedom of the Press.

In August 2021 billionaire Alameda founder Sam Bankman-Fried promoted the traders to co-CEOs so he could focus on his FTX cryptocurrency exchange. By charging basis points on $5 billion volume a day the quantitative trading firm makes about $3-4 million daily. Through investing that income into blockchain platforms like Uniswap and Compound that connect lenders and borrowers with little overhead, Alamada generates an additional 7% to 50% annualized depending on the asset. Both natives of Boston, Ellison wrote her MIT professor-dad an economics paper analyzing stuffed animals’ prices when she was eight years old, before getting a bachelor’s degree in mathematics from Stanford and a job at Jane Street, where she met Bankman-Fried. Trabucco is a former competitive Scrabble player who studied computer science at MIT, where he also met the Alameda co-founder.

The software engineer worked at Palantir and two early-stage startups before cofounding OpenSea in early 2018. OpenSea is the largest marketplace for consumers to buy and sell non-fungible tokens (NFTs). In July, a month when the company processed $330 million in NFT transactions, it raised $100 million in funding at a $1.5 billion valuation. Over the past three months, OpenSea has processed roughly $3 billion in monthly volume.

Founded in September 2020 Slingshot provides a single user-friendly portal to access defi trading platforms like Uniswap and others. Instead of charging fees on the $2 billion volume, they’re experimenting with Robinhood’s model that charges market makers to route orders. Unlike Robinhood, the company that is now closing an investment valuing it at $100 million, lets users audit trades on a public blockchain. After graduating from the University of Minnesota with a degree in computer science he founded Toshint Capital, a crypto hedge managing $30 million, and helped build the Astro Wallet bought by Coinbase in December 2019.

In 2017, after stints as a coder at Coinbase and Uber, Juliano started dYdX, a crypto derivatives trading platform that caters to professional traders outside the U.S. It averages roughly $2 billion in daily trading volume (Coinbase does about $5 billion). The 19-person startup brought in $75 million in revenue in the first nine months of 2021. It expects to reach $125 million in revenue for the full year and $80 million in net profit.

After raising $22.5 million to help The Graph build an open source tool that lets ethereum developers understand how their products are being used, she co-founded Edge & Node to help monetize the project. Edge & Node was originally funded with an 8% stake of the GRT token, which is now worth about $648 million. Kline has also led Edge & Node’s investments into projects adjacent to The Graph, totaling $3.1 million in 2021. Born to a stay-at-home mom and a dad who works on the railroad she was recruited out of college by Bank of America. Frustrated by the clunkiness of traditional finance, she joined ethereum VPN Orchid, in 2018, and helped build it to its current value of $342 million.

Originally founded to create a privacy protecting cryptocurrency like zcash, Iron Fish expanded to include privacy protecting technology that can be digitally wrapped around any cryptocurrency. The platform now has 750 fully functioning nodes compared to bitcoin’s 10,000, and is preparing for a public launch later this year. As a child in Volgograd, Russia, Nadolinski was constantly reminded of WWII levelling of her town while playing in a playground made of tanks. She blames the relative dearth of companies from Russia relative to the high level of academic culture, and technical output, on a lack of property rights and privacy.

TRM Labs provides forensic analysis for the IRS and dozens of others. By charging for licenses that let customers identify where an asset came from, who owns it and score the risk of that owner, the firm has grown 700% since last year and is on track to generate several million dollars revenue this year. Born in New Delhi, India, he graduated from the University of Michigan with degrees in business and computer science. In April 2018 he founded TRM Labs as a game to drive cryptocurrency adoption, pivoting during an industry-wide drop in prices to help analyze blockchain data.

Audius lets musicians create their own business models, using cryptography to ensure a their cut of the proceeds doesn’t change without their consent. While the platform is not yet monetized 100,000 musicians have uploaded songs to the platform and last month 6 million listeners logged in. Further growth is expected following video-sharing app TikTok’s August announcement it would let Audius musicians share their music directly on the site. Growing up in LA Rumberg used to sneak into EDM clubs to listen to his favorite performers, and was tired of seeing closed platforms like SoundCloud booting the acts for failing to comply with the rapidly changing terms.

Snyder co-founded 21Shares in 2018 to build sophisticated crypto investing technology her mom could use. Now valued at $700 million, the firm charges about a 2% management fee for 15 ETPs in 4 countries. With over $2.5 billion AUM it is on track for $60 million revenue this year. In October she and 21Shares board member Cathie Wood jointly filed with the SEC for what would be the first Bitcoin ETF. A native New Yorker, she earned a bachelors in earth systems from Stanford, working on Emmy winning Mission Blue, about a woman oceanographer, before discovering bitcoin.

Hired by Fidelity in January 2021 to build a one-stop shop for institutional crypto adoption, he now manages billions of dollars’ worth of crypto assets for 10 liquidity partners including Arizex and 150 other institutional clients. Through Fidelity venture branch Avon he invested in institutional crypto-trading platform Talos and crypto forensics firm Soldus Labs. Born in New York he earned a double major from Indiana University in finance and technology management, going on to help Bank of America make 25 investments in crypto and more. In November 2017 he helped early enterprise blockchain startup Symbiont raise $45 million.

In 2018 Justin and his brother Austin launched TaxBit, giving enterprises real-time insight into taxes on crypto and equities. With clients including the IRS, the profitable firm raised $230 million from Tiger Global and others at a $1.33 billion valuation, but has yet to spend any of the capital it raised. Born in Seattle, Washington, at the age of 22 he became one of the youngest attorneys ever to get a law degree from the University of Chicago. While working a federal clerkship he discovered crypto, and in 2016 turned down a $75,000 bonus to found TaxBit.