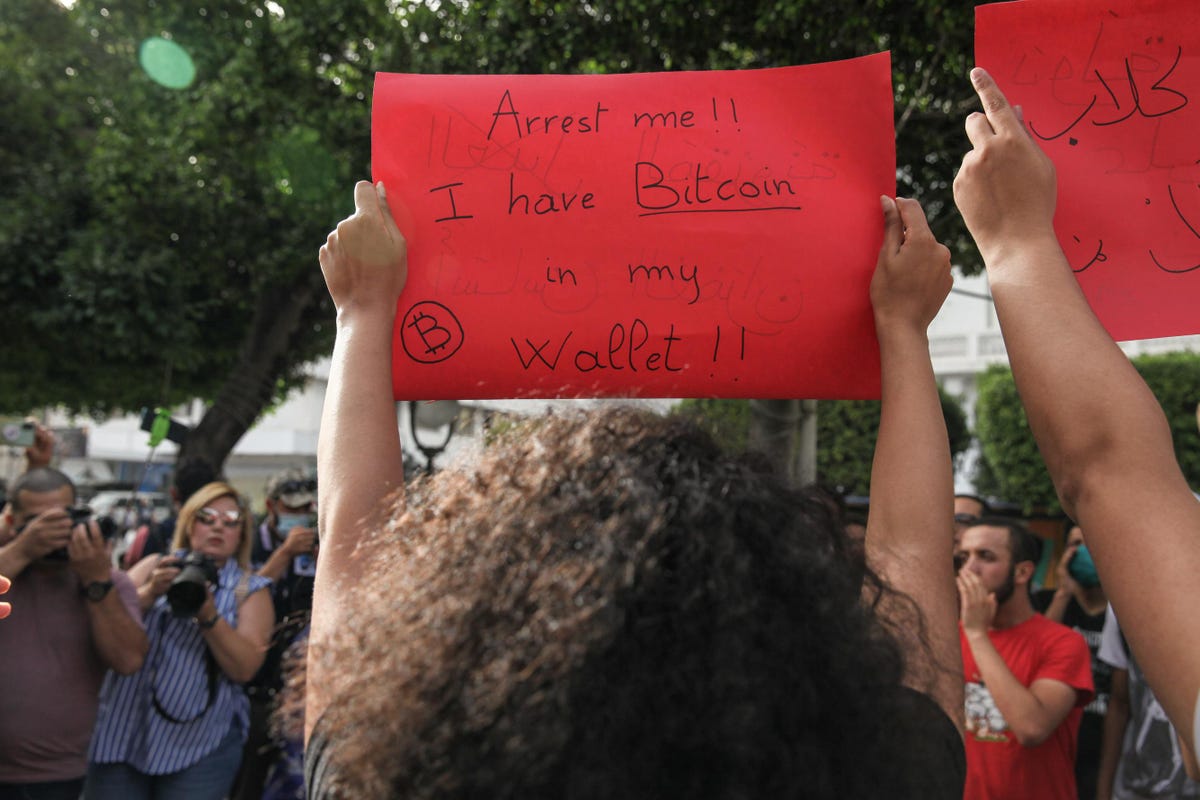 Bitcoin and crypto adoption continues to grow in Africa despite anti-crypto stance by governments … [+] across the continent. (Photo by Chedly Ben Ibrahim/NurPhoto via Getty Images)

Over the past year, Africa has been widely reported as one of the fastest-growing markets for cryptocurrency adoption. Now, there’s an idea of just how fast the market is growing, thanks to a new report from blockchain research and analytics firm Chainalysis.

The African crypto market has grown by over 1,200% in terms of value received over the past year. Chainalysis estimates that African countries collectively received around $105.6 billion worth of cryptocurrency between July 2020 and June 2021. However, African is still the smallest crypto economy of all the regions that the research firm studies.

Cryptocurrency value received by Africa between July 2020 and June 2021

The report features four big trends with regards to crypto adoption in Africa, including:

Despite the relatively small crypto economy in Africa, Chainalysis noted Africa “has some of the highest grassroots adoption in the world, with Kenya, Nigeria, South Africa and Tanzania all ranking in the top 20 of our Global Crypto Adoption Index.”

One way to determine grassroots adoption is to evaluate the portion of a region’s overall transaction volume that features retail-sized transfers. For Africa, that figure is just over 7%, higher than the global average of 5.5%, Chainalysis’ data shows.

According to the report:

“Drilling down further, Africa also sees a bigger share of its transaction volume made up of professional, large retail and small retail-sized payments than the global average. These numbers are a big part of why so many African countries rank high on our adoption index, as smaller transfer sizes suggest higher grassroots adoption amongst everyday users.”

While peer-to-peer (P2P) volumes account for a tiny part (2.6% for bitcoin and 1.6% for all cryptocurrencies) of all African transaction volume, no other region uses P2P services at a higher rate than African crypto users, according to Chainalysis.

An important driver of this trend is the fact that the governments of Nigeria and Kenya, two of the leading African countries in terms of crypto adoption, have made it difficult for crypto companies (such as exchanges) to work with banks. In January, Nigeria’s central bank sent a circular to banks in the country, stating that regulated financial institutions are “prohibited” from “dealing in cryptocurrencies or facilitating payments for cryptocurrency exchanges.”

The Central Bank of Nigeria’s anti-bitcoin move came roughly three months following the viral “End SARS” protest, which saw Nigerian youths demand that their government rein in police brutality in the country. Bitcoin, among other cryptocurrencies, was a significant part of how the protest received funding after Nigerian banks limited the accounts associated with the protest.

In 2018, Kenya’s central bank also warned banks in the East African country against dealing with cryptocurrencies or facilitating transactions for crypto-related entities. On June 4, local bitcoin publication BitcionKE reported that some Kenyan Banks had started sending cautionary emails to customers who have transacted in crypto using their debit or credit card.

It, therefore, comes as no surprise that residents of these two countries are turning to P2P platforms, which do not directly facilitate transactions.

Between July 2019 and June 2020, Africa’s cross-region value received was the highest of all regions that Chainalysis studies. This potentially suggests that more Africans are receiving remittances via crypto.

Percentage of crypto value received by origin between July 2019 and June 2020: domestic vs foreign

Chainalysis also pointed to the monthly growth of cryptocurrency payments below $1,000 (both volume and transaction count) as a potential sign of an increase in crypto-based remittances to Africa. The research firm considers $1,000 as the upper boundary of estimated remittances sent to African countries.

For reference, Sub-Saharan Africa received an estimated $48 billion worth of remittances in 2019, about half of which went to Nigeria, according to a Brookings Institute study.

In addition, World Bank remittance data shows that Sub-Saharan Africa is perennially the most expensive region for sending money. Bitcoin, and cryptocurrencies at large, have long been touted to help reduce the speed and cost of remittances.

Currency risk is at its highest in many African countries. For instance, Nigeria’s central bank has devalued Naira, the country’s currency, by roughly 35% over the past five years. For a country that consumes more imported goods than it exports (crude oil excluded), constant devaluation erodes the wealth of Nigerians.

Artur Schaback, chief operating officer and cofounder of P2P exchange Paxful told Chainalysis that the exchange’s growth in Nigeria accelerated over the past year during times of currency devaluation. The researchers’ data supported Schabacks’ claim, with P2P volumes habitually experiencing a spike following currency devaluations—in both Nigeria and Kenya.

Web traffic is a key part of how Chainalysis determined the source and destination of crypto transactions, Kimberly Grauer, the director of research the research firm, said during a Zoom call.

As a result, the latest figures in the report are only estimates and may differ significantly from reality.

“There’re a lot of caveats to the report, but this is the best estimate out there that you’ll get,” said Grauer. “Some of the caveats are things like VPNs; for instance, we learned Nigeria banned Twitter. So for people to access Twitter, they have to use a VPN.

“Our web traffic data does not have a way of accounting for VPN, which is a major a major caveat.”

Also, the report includes data from only 31 African countries. Africa has 54 countries. Those 31 countries exclude Egypt, which Chainalysis groups in the Middle East region.

“We have statistically significant amounts of data on 31 countries in Africa, excluding Egypt, to feel confident that we can estimate the size of the region.”

Chainalysis’ focus on Nigeria and Kenya in its discussions also stands out. This could give the impression that Nigeria and Kenya are overwhelmingly Africa’s crypto leaders. That’s not necessarily the case, Grauer cautioned.

“If you look at absolute value, South Africa is actually far and away the biggest crypto market, but if you weigh for things like GDP and population, then Nigeria and Kenya stick out.”

“We started to suspect some things were happening in Morocco and a few other countries throughout Africa stick out for other reasons. Togo was another country that was always performing really high on our index across all metrics.”