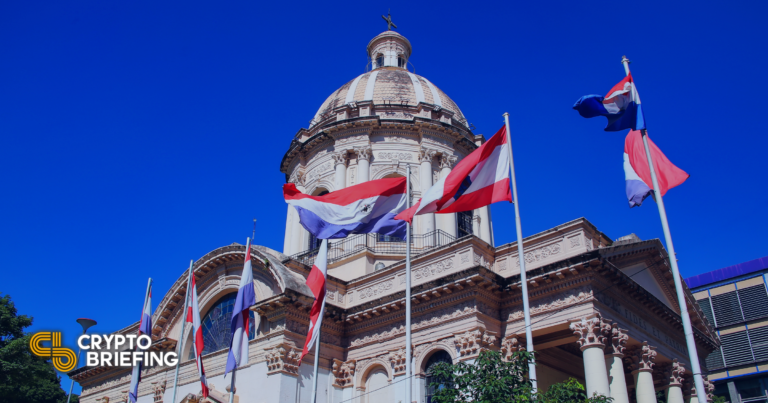 Paraguay’s Deputy of the Nation, Carlos Antonio Rejala Helman, has hinted that the country will start working on a big project involving Bitcoin and PayPal this week. Rejala Helman said that the project would “innovate Paraguay in front of the world” accompanied by a photo of himself sporting Bitcoin-themed “laser eyes.” The announcement comes two days after El Salvador’s President Nayib Bukele announced his plans to make Bitcoin legal tender. Rejala Helman is known for the reverence he holds for Bukele.

After El Salvador, Paraguay could be next up to come through with a major Bitcoin announcement.

Paraguay is reportedly preparing to commence a big project, and it looks like it could involve Bitcoin and PayPal.

Carlos Antonio Rejala Helman, Deputy of the Nation, hinted that the country would launch a major Bitcoin-related project this week on his social media channels last night. He wrote:

“As I was saying a long time ago, our country needs to advance hand in hand with the new generation. The moment has come, our moment. This week we start with an important project to innovate Paraguay in front of the world!”

Though current details are scarce, the post will be of particular interest to cryptocurrency enthusiasts. Rejala Helman rounded off the note with the words “the real one to the moon,” accompanied by hashtags for BTC and PayPal. “To the moon” is one of crypto’s favorite catchphrases, used to refer to the stratospheric price appreciation of crypto assets. Rejala Herman also posted a photo of himself partaking in the “laser eyes” trend, a Twitter-based meme that caught on earlier this year as the crypto community began calling for BTC to hit $100,000. Posting a laser eyes is seen as an endorsement of Bitcoin and cryptocurrencies.

The Paraguay news comes two days after El Salvador’s President Nayib Bukele announced his plans to submit a bill to the country’s congress to make Bitcoin legal tender at Bitcoin 2021. Jack Mallers, founder of Bitcoin payments company Strike, introduced Bukele’s pre-recorded message and revealed that he had been working in El Salvador to increase Bitcoin adoption over the last few months. Strike will now open an “innovation HQ” in El Salvador and the bill will be submitted this week.

Interestingly, Rejala Helman is known for the respect he holds for Bukele. He describes himself as “Bukele paraguayo,” meaning “Paraguayan Bukele,” and is known for his support of the El Salvador President. His pinned post on Twitter is a message directed at Bukele that reads “Thanks for your example.”

Whatever Paraguay is working on, there could be a big difference from El Salvador’s news given that Rejala Helman mentioned PayPal. The payments company has made big moves to adopt Bitcoin recently, allowing crypto payments and withdrawals to third-party wallets. After Rejala Helman’s hint, it seems very likely that PayPal could be involved in ushering in an era of mass crypto adoption in Paraguay.

Editor’s note: This story is developing and will be updated as details emerge. Crypto Briefing has reached out to Rejala Helman for comment.

PayPal has announced that its users will soon be able to withdraw their cryptocurrency holdings to off-site wallets. Crypto Withdrawals Are Coming Jose Fernandez da Ponte, VP of Global Business…

Bitcoin “on Track to Hit Six Figures in 2021”: Bloomberg

Bitcoin to six figures? Bloomberg thinks it’s likely to happen this year.  Bloomberg Shares Crypto Forecast  Bitcoin could break $100,000 this year, according to Bloomberg.  In a June crypto outlook…