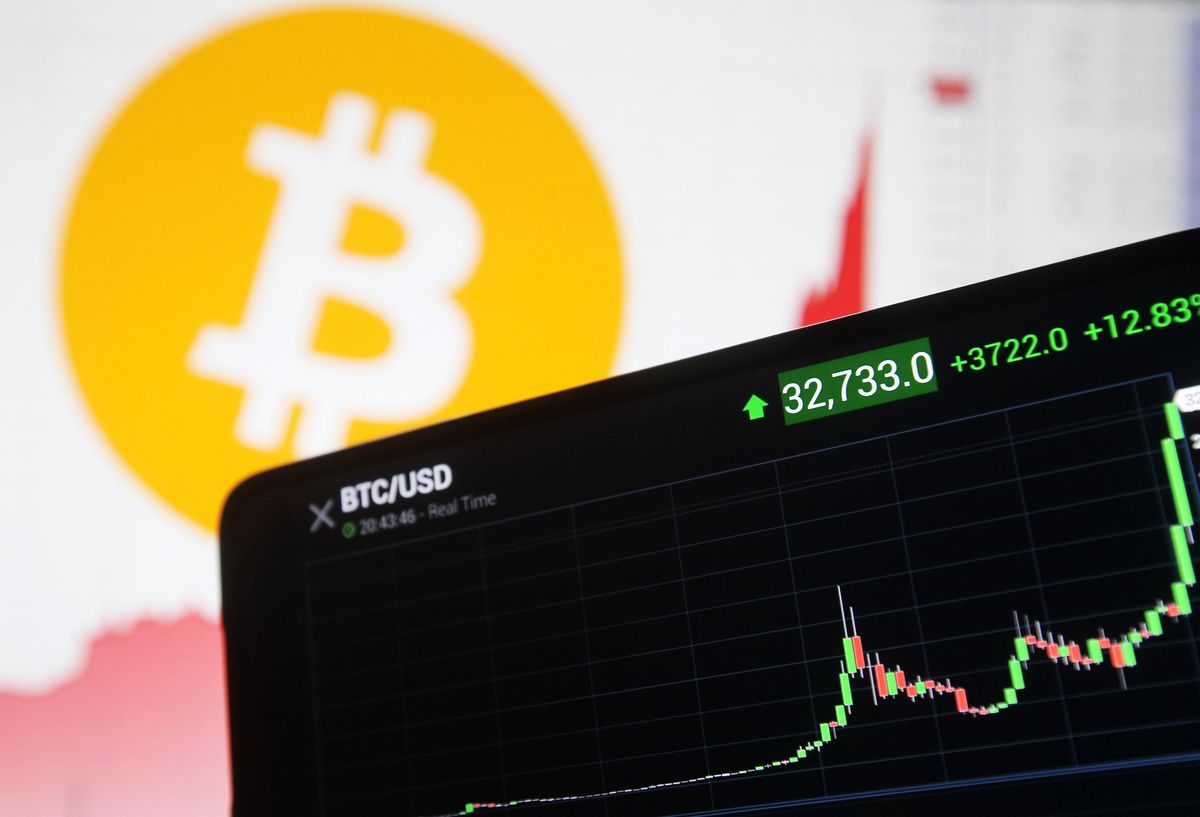 Bitcoin and cryptocurrency prices have climbed after stock trading app Robinhood stepped in to restrict users from GameStop and other stocks that have surged in recent days.

The famously volatile bitcoin price has rallied some 5% over the last 24 hours, breaking a downward trend that saw bitcoin fall under $30,000 yesterday (down from over $40,000 earlier this month).

The cryptocurrency market, today adding $100 billion in value to again come within touching distance of $1 trillion, is being led higher by dogecoin—a tongue-in-cheek bitcoin rival named by Elon Musk as his “fav” cryptocurrency that has soared a blistering 200%.

The bitcoin price has suddenly rallied after a trading app Robinhood restricted users from frothy … [+] stocks including GameStop and AMC Entertainment.

The hugely popular free-trading app Robinhood joined Interactive Brokers IBKR and a growing group of brokerages restricting stocks that have become a battleground for bullish retail traders organised via Reddit’s WallStreetBets forum and Wall Street hedge funds that have long been shorting the stocks.

GameStop and AMC shares, both up triple-digit percentages in recent days, have now plunged—while cryptocurrencies including ethereum, Ripple’s XRP, litecoin and hot new tokens polkadot, cardano and chainlink, have climbed, each adding between 5% and 10%.

Dogecoin, now the 17th biggest cryptocurrency by value, according to CoinMarketCap, has gone through meme-based bubbles before, climbing last year after a viral TikTok video about the cryptocurrency racked up 1 million views—and helped by Barstool Sports’ David Portnoy.

While dogecoin’s rally is likely to be short-lived, bitcoin and cryptocurrency advocates have been quick to claim Robinhood’s heavy-handed interference will advance blockchain-based assets and services.

“The lack of transparency in traditional markets has resulted in limited oversight but also a lack of opportunity for retail investors, which has been exacerbated by the debasement of the dollar,” Meltem Demirors, chief strategy officer at London-based digital asset manager CoinShares, said via email.

“Crypto inverts this power structure, and has really been a bottoms up, retail led movement, with bitcoin markets developing entirely outside of Wall Street and the traditional financial system. Crypto markets are open and accessible to anyone with a smart phone, and bitcoin presents an equal opportunity to investors of all types, from online shoppers earning bitcoin back with their Fold card to retail users buying $100 on Gemini, to institutions buying $10 million contracts on the CME, and everyone in between.”

The bitcoin and crypto community cheered bitcoin’s price rise, taking it as a signal people are flocking to crypto.

“As advocates for retail investors rail against the current structure and practices of financial markets, it is important to note that much of the work being done in the blockchain space has been inspired by these barriers. Removing obstacles to normal, everyday working people that are building and seeking wealth growing opportunities has always been part of the ethos of crypto.”

The bitcoin price has climbed after dipping under $30,000 per bitcoin yesterday, boosted after … [+] Robinhood traders were blocked from GameStop and other frothy stocks.

“This was a shot across the bow for institutional investors everywhere,” Peter Smith, the chief executive of Blockchain.com, said in emailed comments.

More broadly, surging GameStop shares and the rising bitcoin price have both been called “populist rage as an investment strategy,” by Mark Rosenberg the chief executive of political data firm GeoQuant.

“This is a kind of ‘chaos finance’ following the chaos politics of the past 4 years,” Rosenberg said via email. “Bitcoin is a similar phenomenon. Expect further upheavals in markets, politics and society—and thus more and more pressure for tech regulation from the powers that be.”