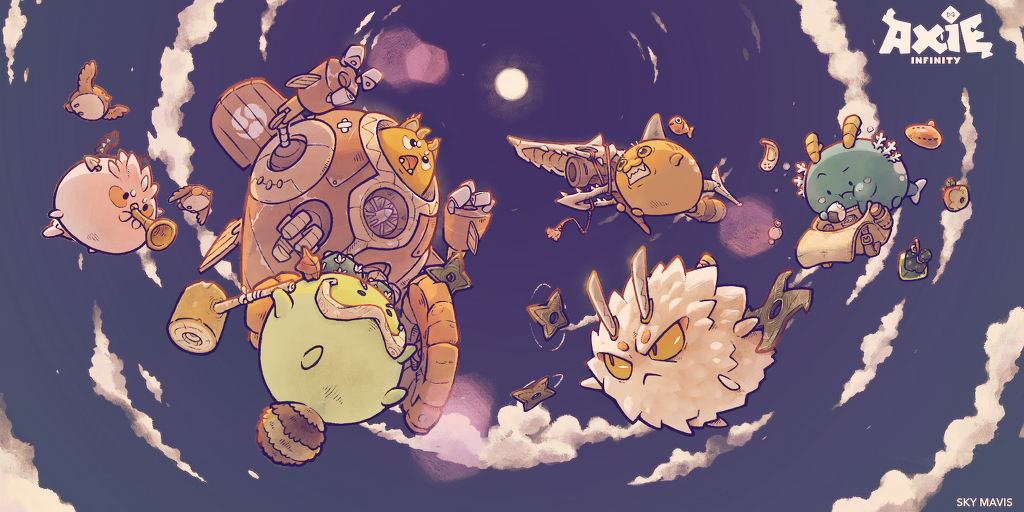 Sky Mavis, creator of the surging Ethereum-based game Axie Infinity, has raised $152 million in a Series B round led by Andreessen Horowitz. Axie Infinity is the largest NFT project in terms of total trading volume, with more than $2.2 billion to date.

Axie Infinity has rapidly become the largest player in the burgeoning crypto gaming space, not to mention the largest NFT project to date by total trading volume—and developer Sky Mavis continues to ramp things up.

Today, the studio announced that it has raised $152 million in a Series B round led by venture capital firm Andreessen Horowitz, with participation from Accel and Paradigm. Arianna Simpson, general partner at Andreessen, will join Sky Mavis’ board as part of the round.

The Information reported yesterday that Sky Mavis raised the funds at a valuation near $3 billion, though the company has yet to confirm. Sky Mavis representatives did not immediately respond to Decrypt’s request for comment.

Sky Mavis will use the funds to expand its team and scale its blockchain gaming infrastructure, as well as build a distribution platform for other blockchain-driven games.

The Ethereum-based Axie Infinity is built around NFTs, requiring players to acquire three NFT monsters that they can battle against each other. An NFT is essentially a deed of ownership to a provably scarce digital item—in this case, cartoonish combatants with varying attributes. At a buy-in price near $150-200 worth of ETH for each NFT monster, it’s not cheap to start playing the computer and mobile game.

That hasn’t stopped players from flooding in over the past few months, however. Axie Infinity has seen a surge in popularity since late May, after launching a Ronin sidechain for Ethereum to minimize transaction fees and network congestion. The game currently counts 2 million active daily users, according to Sky Mavis.

All the while, Axie Infinity has yielded more than $2.2 billion worth of NFT transaction volume, per data from CryptoSlam, with the vast majority of that tally coming in the last four months.

Furthermore, the value of Axie Infinity’s native AXS token has surged this year, rising from a price of $0.59 on January 1 to an all-time high near $156 set yesterday, according to CoinGecko. Sky Mavis launched AXS staking functionality last week, offering rewards for users who lock up their AXS within the network, and also airdropped $60 million worth of AXS to early Axie Infinity players.

Just before Axie Infinity’s summer surge, Sky Mavis announced a $7.5 million Series A round in early May. While a relatively modest raise compared to other crypto firms in recent months, even in the crypto gaming space, it featured well-known investors such as Dallas Mavericks owner Mark Cuban and Seven Seven Six founder/Reddit co-founder Alexis Ohanian.

In a recent interview, Sky Mavis Growth Lead Jeff Zirlin told Decrypt that while that Series A was a “small round,” bringing on prominent investors like Cuban and Ohanian—a particularly vocal supporter of Axie and its “play-to-earn” rewards model—were “indicators of social proof.”

Zirlin said that it helps drive awareness of the game and draw new talent to the team. Along with the aforementioned plans, Sky Mavis is also expanding and enhancing Axie Infinity—including launching a new battle system, land-based gameplay, and free starter monsters—as well as building a decentralized exchange for Ronin.