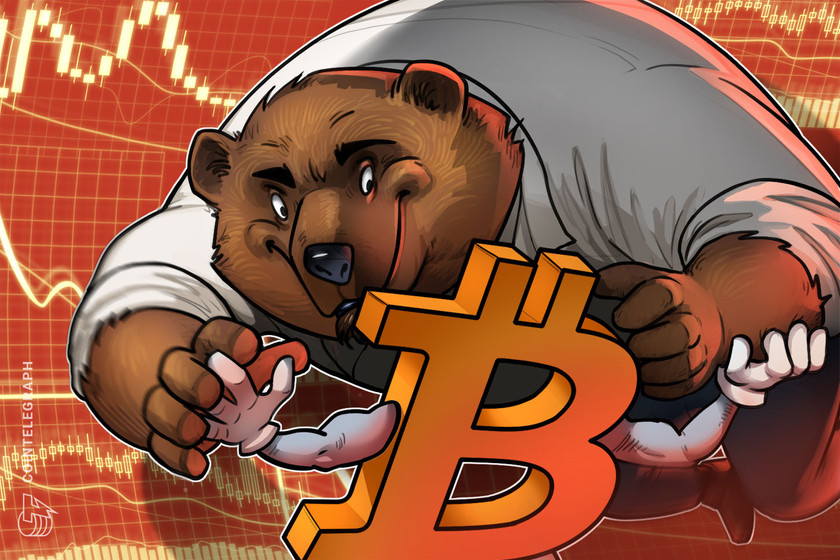 Bitcoin (BTC) bulls should brace for a potential onslaught from bears as the number of margined short positions on Bitfinex jumps by a little over 378%.

Known to most by the ticker BTCUSD Shorts, the dataset records the number of bearish positions in the Bitcoin market. In simple terms, traders borrow funds from Bitfinex — their broker — to trade bet on bearish outcomes for the instrument BTC/USD. Meanwhile, the value of opened short positions is measured in BTC.

The spike prompted some analysts to alarm about a potential price crash in the Bitcoin spot market, primarily because a similar wild BTCUSD Shorts uptrend at the beginning of last month had led the BTC/USD exchange rate down by almost $13,000 on May 19.

For instance, independent market researcher Fomocap tweeted a chart that showed a visible correlation between Bitcoin spot rates and its margined short positions. The analyst highlighted two instances to note that two metrics moved inversely with some lag.

His first example showed that on May 25, BTCUSD Shorts dropped lower, which was later led to a price rally in Bitcoin spot markets.

EBlockChain, a TradingView.com contributor, said earlier Monday that BTCUSD Shorts exceeding 200% and above is a “strong indication” of an imminent dump in Bitcoin spot markets. The analyst added:

“It could be triggered in a [matter] of few hours [to] three days max.”

BTCUSD Longs, another Bitfinex dataset that records the number of bullish margin positions, surged to as high as 44,538.6579 BTC on Monday. So it appears, Bitcoin’s long exposure remained higher than short exposure in totality, illustrating that, to traders, the direction of the least risk was to the upside.

But a sudden drop in Bitcoin spot prices could also lead leveraged long holders to dump their BTCUSD positions, which, in turn, incites further selling. Such an event is called “long squeeze.” May 19’s price crash, for example, had liquidated about $7.5 billion of long-leveraged positions across the cryptocurrency derivatives market.

Jacob Canfield, a crypto trader, provided an optimistic outlook for Bitcoin following the May crash. Last week, the analyst stated that Bitcoin has already dropped by more than 40% following its May’s Long Squeeze — and now there is a lesser probability of facing another significant bearish move.

After a long squeeze and liquidity is taken to the downside.

Liquidity is usually engineered to the upside and shorts get trapped thinking more downside is coming.

Meanwhile, the cost to fund long positions in the Bitcoin derivatives market remained largely below zero following the May 19 crash. Negative funding rates cause bearish traders to pay fees every eight hours. The situation encourages market makers and arbitrage desks to buy inverse swaps — or perpetual contracts — as they simultaneously unload their futures monthly contracts.

Bitcoin’s ongoing consolidation move has many traders to point out the possible formation of a Bearish Pennant structure.

Not a big fan of this structure. $BTC pic.twitter.com/yO8bG66Zzr

In retrospect, bearish pennants are downside continuation indicators, i.e., their setup typically involves the asset breaking out of the range and continuing in the direction of its previous trend. For example, Bitcoin dropped from around $65,000 to $30,000 before forming the pennant. Therefore, its likelihood of continuing lower appears higher based on technical structures alone.

Economists forecast that CPI would rise to 4.7% for May compared to 4.2% in April.

More evidence dropped in about investors’ intention to hold Bitcoin than trade/liquidate them for other assets. For example, on-chain analytics firm Glassnode reported a decline in net exchange flows involving Bitcoin.

Meanwhile, its rival CryptoQuant highlighted a significant drop in volume across the Bitcoin blockchain, hinting at a similar HODLING outlook via its “BTC: Active Address Count” metric.