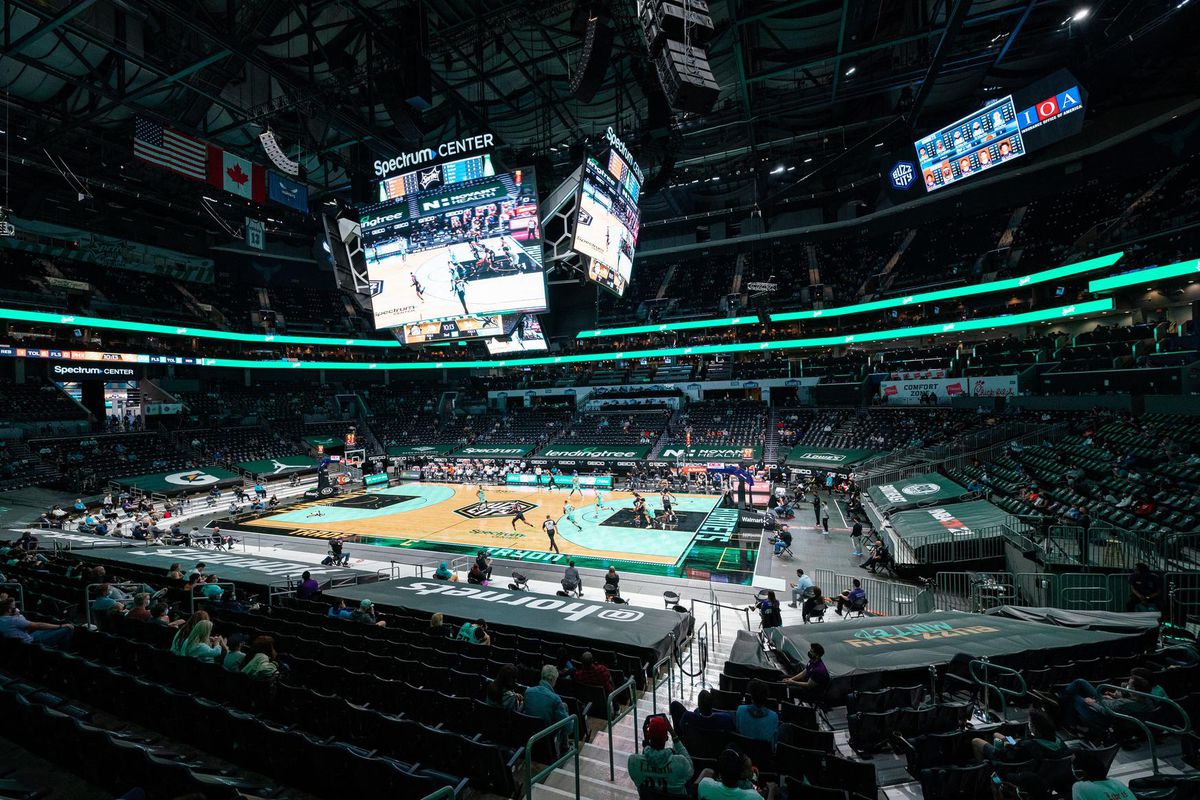 Fans at the Hornets’ home at the Spectrum Center in Charlotte can purchase one of 88 commemorative … [+] NFT tickets on Thursday.

Tamara Daniels was at dinner with friends in Las Vegas when she first heard the term NFT, the increasingly popular acronym for non-fungible tokens. She was leaving her job with the NHL team in the city, the Golden Knights, to join the Charlotte Hornets as a vice president and the team’s general counsel, and one friend mentioned that it was cool she was joining the NBA because the league has been so innovative and at the forefront of technology with its investment in Top Shot NFTs.

Daniels raised her eyebrows. NFTs? “That was the first I heard,” she remembered.

Little did she know that, within weeks, she would be spearheading the first ticket-based NFT in all of major American sports, pulling together the Hornets’ various departments—from marketing and sponsorships to ticket sales and creative content—to produce a unique digital collectible, accessible to fans during Thursday’s game against the Clippers.

It should not be a surprise that the Hornets are at the forefront of this technology, which honors the team’s inaugural season, in 1988, according to team president and vice chairman Fred Whitfield. After all, Whitfield pointed out, 33 years ago, the Hornets brought you teal uniforms and pinstripes.

“We see ourselves as one of the most innovative sports franchises that tries to be on the forefront as things evolve going forward,” Whitfield said. “As NFTs have become more and more poplar as of late, our internal team certainly felt like this would be a very unique way that we could continue our extension into being innovative, being creative, trying to touch that next generation of fans, whether it is millennials or Gen Zs that were hoping to connect not only to the Hornets but to the NBA’s brand.”

It will be the second go-round of NFTs offered by NBA teams, with the Warriors having done an auction at the beginning of the month. That was, to put it mildly, done for high-income fans, as one NFT of the Warriors’ six championship rings went for $871,581 (including gold physical copies of the rings). But the Hornets, who proceeded with the project entirely independent of Golden State’s efforts, took a much different approach, making 88 special-edition NFT tickets available at the fan-friendly price of $4.99.

That was a critical element to the Hornets’ project. Whatever the team produced, it had to be accessible to every day fans, not just those who could plunk down six-figure investments. The other important thing was that the project be done as much within the organization as possible, so that the end result truly would be a Hornets product.

“The beauty of it is, we did it all internally,” Whitfield said. “Tamara spearheaded it, but it was a complete team effort. It was all department heads, their teams, really working together, collaboratively, to bring this thing together, especially as we had to change directions and evolve.”

And they certainly did have to evolve, even if the team only had about a month-and-a-half to make things work. The story of the Hornets’ NFT is one of determination mixed with seat-of-the-pants innovation. The original plan to partner with the Ethereum blockchain was scrapped because it would have been too expensive for the fans, and the Hornets instead went with the Mint blockchain—which had never before done a one-off deal like the team was seeking. That was a pivot.

Then there was the marketplace problem. Original plans to sell the NFT through the Shopify app fell through because the testing could not be done in time. Another pivot: The Hornets instead had to set up a point-of-sale configuration to claim a NFT ticket through the team app. It probably worked out better that way, simplifying the fan experience. “It’s like ordering a hot dog at the game,” Daniels said.

Now that the Hornets’ tickets are ready for release, Daniels credited the flexibility shown within the different departments of the organization for bringing the NFTs to fruition.

“Literally every day this month, there has been an obstacle or a pivot,” Daniels said. “But the best part about it was, our team never got discouraged even when it was like, ‘Oh, man we’re not going to be able to launch it before the end of the season.’ Or, when we saw Golden State launch it, ‘Oh man, we’re not gonna be the first team.’ It never deterred anyone, we were never dissuaded. And, man, there are so many components that go into this, we’re learning on the fly.”

They are continuing to learn and they’re certainly not done with NFTs. It is expected that more teams will get involved with various NFT items going forward, but as the first team to offer an inexpensive option linked to an actual game, the Hornets will be at the forefront of the technology.

“Blockchain technology is the future,” Daniels said. “We’re going to see a lot more applications arising out of the block chain that go beyond what an NFT is because of the open-source nature of it and the ability to make something a true one-of-a-kind and then track it through its lifetime. That is going to have applications in the ticketing world for sure. Something that was developed for Bitcoin has a lot of uses beyond that. We wanted to get in on that.”

On Thursday, for under five bucks, Hornets fans, too, can get in on it.