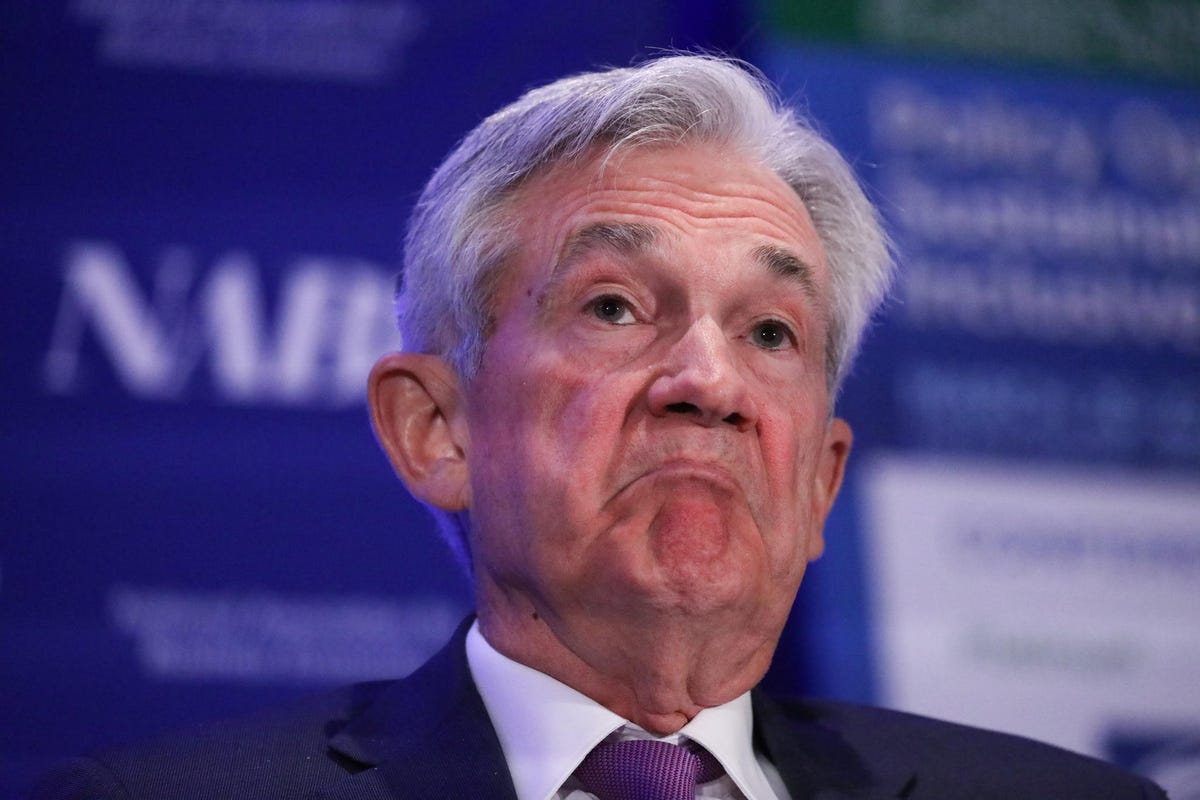 Bitcoin BTC and cryptocurrency prices have fallen along with stock markets this year as investors brace for a more hawkish Federal Reserve.

The bitcoin price has lost around 40% from its peak of almost $70,000 per bitcoin late last year with the ethereum price also down by nearly half. Other major coins—including Binance’s BNB BNB , Ripple’s XRP XRP , solana, cardano, Terra’s luna and avalanche—have also plunged, wiping $1.2 trillion from the combined crypto market in a matter of months.

Now, after Federal Reserve chair Jerome Powell signaled a half percentage point interest rate hike is on the table at next week’s meeting, the market is braced for the central bank to begin shrinking its huge $9 trillion asset portfolio as it battles soaring inflation.

Federal Reserve chair Jerome Powell has signaled the central bank was likely to raise interest rates … [+] by a half percentage point at its upcoming meeting, putting bitcoin, crypto and stock prices under pressure.

“Price volatility in the bitcoin market over the last few weeks can be attributed largely to its correlation to other risk assets, which in general have been moving in reaction to conflict in Ukraine, supply chain issues due to rising Covid cases in China, and ongoing interest rate hikes and future balance sheet machinations by the Federal Reserve.”

Early in the Covid-19 pandemic, the Federal Reserve began an unprecedented stimulus program that saw its balance sheet double and interest rates fall to historic lows as it flooded markets with cash in an effort to offset the economic damage of Covid-19 and lockdowns. As the pandemic has begun to recede and inflation has spiked, the Fed has pivoted to trying to cool the economy.

“It is appropriate in my view to be moving a little more quickly [than the Fed has recently],” Powell said last week, speaking after a panel discussion with European Central Bank President Christine Lagarde hosted by the International Monetary Fund, adding he thinks “there’s something in the idea of front-end loading” those moves.

However, economic data has this week shown the U.S. economy shrank in the first three months of the year, contracting by 0.4% in the first quarter, its weakest quarter since the early days of the pandemic.

“This is bullish for risk assets like bitcoin and equities in my opinion, as the Federal Reserve may become less hawkish to avoid a recession,” Marcus Sotiriou, an analyst at the U.K.-based digital asset broker GlobalBlock, wrote in an emailed note.

Bitcoin, crypto and stock market traders are watching carefully for any sign the Fed will stray from its telegraphed move when it meets this week.

“An increase higher than 50 basis points, deviating from the current consensus, may lead to a drop in risk markets including bitcoin,” added Haggenmiller. “Regardless, the bitcoin market has proved to be relatively resilient in the long term throughout periods of uncertainty.”

The bitcoin price has fallen sharply from its all-time high, dragging down the price of other top … [+] ten cryptocurrencies ethereum, BNB, XRP, solana, cardano, luna and avalanche.

Meanwhile, the bitcoin and crypto community has cheered a series of positive developments this week, including Central African Republic becoming the second country after El Salvador to adopt bitcoin as legal tender and investment giant Fidelity announcing the launch of 401k bitcoin accounts.

“This lack of correlation between price moves and increasing mainstream adoption demonstrates that more institutions are grasping bitcoin’s immense utility as a currency and store of value and its inevitable, powerful role in our financial future.”