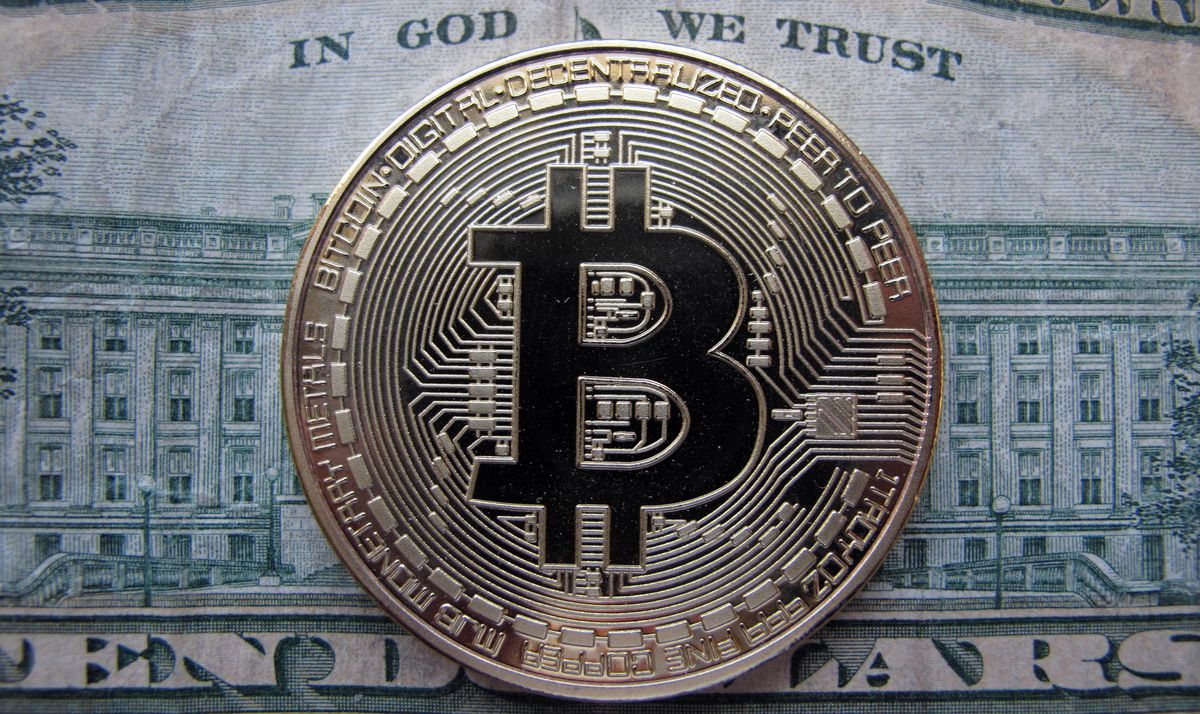 Bitcoin has soared over the last year, adding more than 300% and smashing through its 2017 highs to tread fresh ground for the first time in three years.

The bitcoin price mega-rally, surging along with the likes of Tesla TSLA as the U.S. Federal Reserve pumps trillions of dollars in to the market, has already been called a bubble—with the chief investment officer of Guggenheim Investments warning bitcoin’s “parabolic rise is unsustainable in the near term.”

Now, with the Federal Reserve officials hinting it could begin “tapering” its huge asset purchases sooner than expected, all eyes are on Fed chair Jerome Powell who’s due to speak this Thursday on a webinar audience hosted by Princeton University at 12:30pm EST.

Bitcoin’s huge rally has been partly driven by huge Federal Reserve money printing in the wake of … [+] the coronavirus pandemic.

“It could be the case that things are going a lot better, and we do end up doing some type of tapering” in late 2021 or early 2022, Chicago Fed President Charles Evans recently told reporters on a conference call.

Many big-name and institutional investors piled into bitcoin through 2020 as the Fed flooded the market with freshly-printed cash, led by billionaire hedge fund manager Paul Tudor Jones who named bitcoin as the “fastest horse” in the race to beat inflation.

“[Tapering] would be a major problem for the price of bitcoin as it would diminish the macro and institutional demand,” Alex Krüger, economist and cryptocurrency trader, said via Telegram. “I don’t expect any tapering in 2021 but need to keep an eye out for it and be quick to react.”

Some fear that even the hint that the Fed could begin to reduce stimulus might create a so-called “taper tantrum,” as markets saw in 2013 when the world’s most powerful central bankers tried to turn off the taps.

MORE FROM FORBESElon Musk, The World’s Richest Person, Wants To Be Paid In BitcoinBy Billy Bambrough

The bitcoin price has soared since its March crash, climbing along with most other markets as the … [+] Federal Reserve and other major central banks pumped cash into the system.

“If we see another round of taper tantrum, which caused turbulence in the markets in 2013, this will have a negative impact on bitcoin and the crypto market with its inherently stronger movements compared to blue-chip stocks,” Alex Kuptsikevich, senior financial analyst at FxPro, said via email, pointing to bitcoin’s growing connection to traditional markets.

“However, it is unlikely that a rollback from the Fed is something to be seriously feared for the time being. Despite possible signs of displeasure with Powell’s bloated equity capitalisation, a withdrawal of support for the markets would almost certainly be a shock to the economy, ensuring a second recession. What is worse, is that if government bond purchases are curtailed, yields could quickly spiral out of control as the largest of long-term buyers leave the market. Thus, fears of a rollback are nothing more than concerns about a new extreme bad scenario. So far, neither the Fed nor Powell has been seen to create black swans.”

While Powell isn’t expected to signal the Fed is about to make a major move any time soon, bitcoin has found its place in a world of lower-for-longer interest rates and rock-bottom bond yields—and may appear less attractive if this were to change.