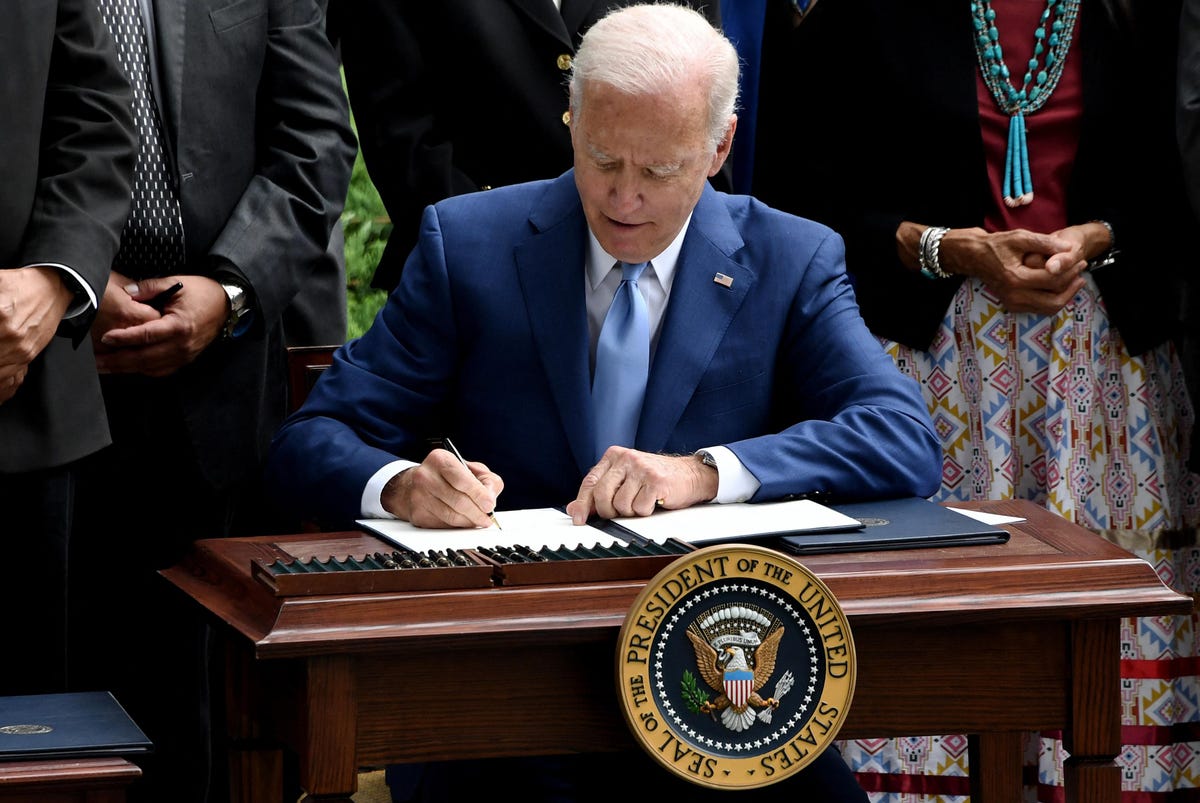 As bitcoin and cryptocurrency prices are surging across the board, the U.S. government is weighing a regulatory crypto crackdown, according to reports.

The bitcoin price has rocketed 20% over the last month, adding over $10,000 per bitcoin. The price of ethereum, cardano, Binance’s BNB, Ripple’s XRP, solana and dogecoin have followed bitcoin higher, helping the combined cryptocurrency market soar to over $2.3 trillion.

Amid the huge crypto price pump, the Biden administration is weighing an executive order that would see a raft of new rules related to bitcoin and cryptocurrencies, it was reported by Bloomberg, citing anonymous sources familiar with the matter.

The Biden administration is reportedly considering an exectutive order that would mean a significant … [+] increase in bitcoin and crypto oversight even as the bitcoin price surges higher, boosting ethereum, cardano, BNB, XRP, solana and dogecoin.

The executive order, which is still under consideration, would see federal agencies charged with making recommendations on bitcoin and crypto and would touch on “financial regulation, economic innovation and national security,” Bloomberg was told by White House insiders who added a “crypto czar” could be appointed to “coordinate agencies’ work on digital currencies.”

A Biden administration official told the newsire that even if the executive order is not released, the overall U.S. strategy for cryptocurrencies will still be made public.

In recent months, pressure has mounted on regulators in the U.S. and around the world to rein in the white-hot bitcoin and crypto market that’s grown by almost $2 trillion this year alone and been thrust into the national spotlight for its use in May’s Colonial Pipeline ransomware attack.

Over the summer, the crypto community revolted against a Treasury’s push for new tax reporting requirements on cryptocurrencies as part of president Joe Biden’s multi-trillion dollar infrastructure package.

Treasury secretry Janet Yellen has said the government should create a regulatory framework for stablecoins, cryptocurrencies pegged to traditional currencies or real-world assets that act as a major onramp for crypto investors, while influential U.S. senator Elizabeth Warren has called on regulators to accelerate a review of the impact of cryptocurrencies on the stability of the financial system.

The bitcoin price has rallied 20% since this time last month, climbing from lows of under $40,000 … [+] per bitcoin to over $55,000. Meanwhile, ethereum, cardano, Binance’s BNB, Ripple’s XRP, solana and dogecoin have also rocketed.

However, the chairs of both the Federal Reserve, Jerome Powell, and the Securities and Exchange Commission (SEC), Gary Gensler, have recently said the U.S. won’t follow in China’s footsteps in trying to outlaw bitcoin and cryptocurrencies.

In September, China expanded an earlier ban on bitcoin and crypto mining, crackdown on all crypto trading activity. The move sent the bitcoin price sharly lower though it has since bounced back, along with the price of smaller coins ethereum, cardano, Binance’s BNB, Ripple’s XRP, solana and dogecoin.

Elsewhere, the Bank of England this week said increased bitcoin and crypto regulation is needed as cryptocurrencies are becoming more integrated into the U.K.’s financial system and the Bank for International Settlements, the organization that represents most of the world’s central banks, published preliminary guidance on how regulators can oversee bitcoin and cryptocurrencies.