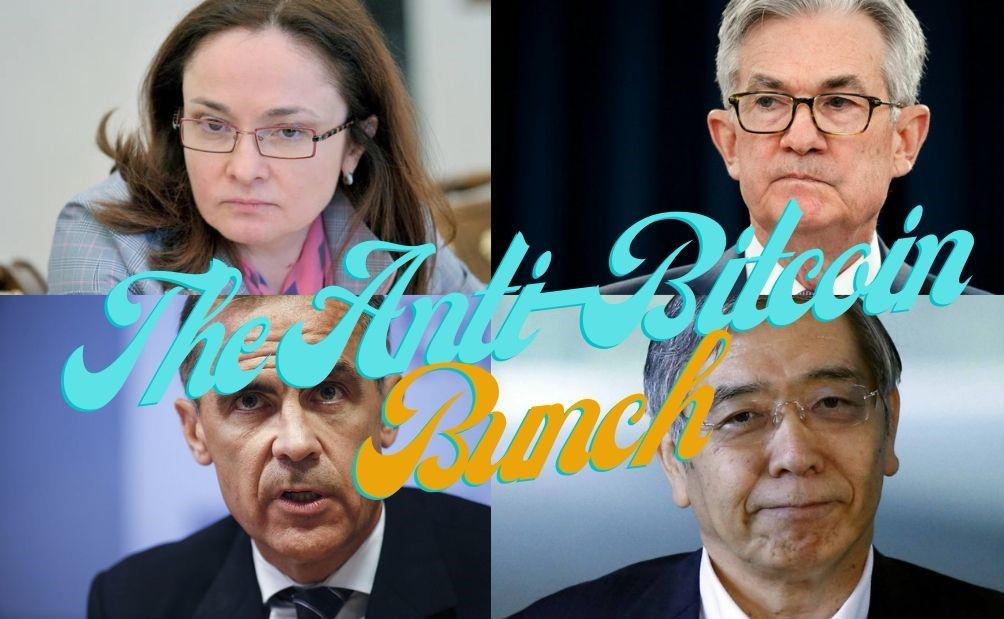 Central banks from Russia, the U.S., England and Japan all have choice words to say for Bitcoin: … [+] it’s worthless, and their bank’s digital currency will be better. Can these people ultimately destroy Bitcoin?

The powers that be are increasingly clamoring for greater, centralized control of everything, from healthcare to money. Decentralization is fighting an uphill battle. As centralization and decentralization butt heads, could it be that Central Banks, controllers of the flow of money, could eventually make a move to kill the granddaddy of all decentralized finance: Bitcoin?

It is true, no central banker likes Bitcoin (BTC).

This week, the People’s Bank of China said it had no value.

Bitcoin, and other cryptocurrencies “are not legal tenders and have no actual value support,” Deputy Director of the Financial Consumer Rights Protection Bureau of the People’s Bank of China, Yin Youping, said in the local Chinese language press on August 27.

On August 13, Russia’s Central Bank called it a “technological financial pyramid scheme.” First Deputy Governor of the Bank of Russia, Sergey Shvetsov, likened buying Bitcoin to “entering a minefield” and said the local stock exchange should not list any companies that trade in Bitcoin (think the local version of Coinbase).

A month earlier, on July 18, the Bank of England’s FinTech Director, Tom Mutton, said a digital fiat would be way better than stupid Bitcoin. “Bitcoin, given its performance shortcomings and energy inefficiency, is in no way a relevant comparison for the sort of technology we might use in a central bank digital currency,” Coindesk reported him saying.

Two months earlier, Bank of Japan governor Haruhiko Kuroda said Bitcoin was basically a casino chip used for highly speculative gambling, er um, investing. And no one settles purchases in Bitcoin. “No one really uses Bitcoin as a means of settlement,” he told Bloomberg on May 28.

I have been warning about Bitcoin being gobbled up by a globally coordinated central bank action to take it out of the market. Sure it would drive up prices of Bitcoin fast, but when the major central banks of the world hoard all the Bitcoin, then what? Then again, what is stopping them from banning it?

Perhaps this is why John Paulson, a hedge fund manager who’s claim to fame was calling the housing bubble of 2008, thinks that Bitcoin (and altcoins) have no value either. He said this on Bloomberg TV on Monday, for subscribers only.

“Cryptocurrencies, regardless of where they’re trading today, will eventually prove to be worthless. Once the exuberance wears off, or liquidity dries up, they will go to zero. I wouldn’t recommend anyone invest in cryptocurrencies,” he said.

Retail investors with a Gemini account hate to hear this. They’ve been buying up altcoins of blockchain projects no one even really uses, except for computer dorks and gamers. Still, 10,000% gains in coins like Dogecoin have turned people into true believers. Maybe it is all worthless. But in the short term, spin that wheel.

In the long term, however, the biggest risk to Bitcoin, in particular, is the Fed, the PBoC, the Bank of Japan, etcetera. They all clearly have no use for Bitcoin. Nor do they want any competition for their digital fiat currencies.

Bitcoin is getting some competition from central bank digitization programs. But regulators may be … [+] even more of a headwind, potentially putting a lead weight around the propulsion engines of that famous Bitcoin moon launch.

“All governments, including the U.S., want their population to use their national currency,” says Jason Blick, CEO of EQIBank and Chairman of EQIFI. He says this is due to the economic principle known as seigniorage, which allows the Federal Reserve to print dollars at a value significantly higher than the cost of printing the money in the first place.

“The challenge with seigniorage is that it fails if people don’t use the money you print. In small countries, such as Argentina and Iran, this has become a material issue as alternatives, such as Bitcoin, have created a shadow economy caused by a lack of faith in the national currency,” Blick says. “This seigniorage problem is very real in many countries, which is why governments are often tempted to impose digital asset bans. But I don’t think this situation will ever happen in the U.S., given the dominance of the dollar.”

Some people are even a bit bullish if a digital dollar, or the digital renminbi (RMB) gets a true rollout. It’s already been piloted in parts of China.

“If the Federal reserve launches a digital dollar, which is compatible on chain, then it’s going to be a positive sign for BTC, Ethereum and other crypto currencies,” thinks Sainath Gupta, CEO of Knit.Finance in the British Virgin Islands. They are in the multi-blockchain wrapping, bridging and liquid staking space for the decentralized finance niche of crypto. “I think it will then be an easier and more trustful bridge for institutional investors, retail investors will come in fear of missing out, increasing crypto prices all around,” he says.

Centralized digital currencies do not really pose a direct threat to Bitcoin, many in the blockchain and crypto industry believe. The reason being that their regulators and purposes for existence are significantly different. Unlike Bitcoins, a digital renminbi, or digital dollar, is issued by a central authority. Bitcoin’s decentralized structure, volatility and limited supply has most countries classify it as a commodity investment. Therefore, demand for Bitcoin does not correlate with demand for any government-issued digital currencies.

“Bitcoin is really at the mercy of banking regulations especially Anti-Money Laundry laws,” says Adnan Haider, CEO of Regal Holdings LLC. Prior to Regal, Haider was Head of Fixed Income and Equities in the Treasury and Investment Division of a large United Arab Emirates bank. He was also a former Director at Barclays Capital in credit derivatives trading and corporate finance, so he is familiar with traditional banking systems. Their RegalX platform is used by forex, commodities, precious metals, and cryptocurrency traders. They also run “AI Autotrade”, a machine learning, research, and development company that allows for both human trading and quantitative, robo-trading.

Most central banks, when their executives are not trashing Bitcoin, are really still working out how to  set regulations with the Securities and Exchange Commission, for instance.

Crypto investors are “waiting to see what regulators will say and if whether they will be allowed to exist. Governments have yet to figure out how to properly regulate the industry, so it is likely that sooner or later we will hear more intense regulatory action from government agencies around the world,” he says.

On August 30, Roslyn Layton, a senior Forbes contributor out of Denmark, wrote the U.S. Securities and Exchange Commission’s lawsuit against cryptocurrency innovator Ripple Labs in December 2020 received a lot of blowback from the crypto aficionados. During the pre-trial phase, Ripple’s legal team  put the SEC itself on trial, she wrote, after “years of conflicting and confusing guidance on the rules for cryptocurrencies. No one expected the tsunami of legal, political and social media action from retail cryptocurrency investors, outraged by the betrayal from an agency claiming to protect their interests.” The meltdown of the SEC’s credibility with this $2 trillion global investor community exposes a costly SEC miscalculation.

Such is the regulatory woes of crypto. It cuts both ways.

For China, they’ve always hated Bitcoin. But remember when they told the Bitcoin miners to turn off? Well, they’ve turned back on again.

BTC has been a small but public nuisance for the Chinese government for years.

Xi Jinping is no fan of Bitcoin.

“Beijing has always maintained a wary view on anything that could impact national financial stability. It is committed to the removal of any unregulated, volatile digital asset being traded, used, and invested in by the Chinese population,” says Blick.

So when China’s PBoC bad-mouths Bitcoin, what else is new?

Their primary target is the dollar. Their digital RMB is designed to not only vanquish Bitcoin but is the start of a long-term journey to remove the dollar’s dominance as global trade currency, especially in Asia. “The consequence of this will inevitably result in short-term panic selling of BTC,” Blick says.

For Haider, it’s all just central bank moaning and groaning for the time being. Your Bitcoin is still safe.

“The surge of digital assets will continue to disrupt traditional finance. Whether you are sitting in the pro or anti crypto camps, what is clear is the disruption that digital assets are having towards payments, cross-border transfers, and foreign currency markets,” Haider says. “I see the next few years as an important era of transformation. It’s why we see the emergence of Central Bank digital currencies as well as the global regulatory and taxation bodies attempting to retain control of this ecosystem.”