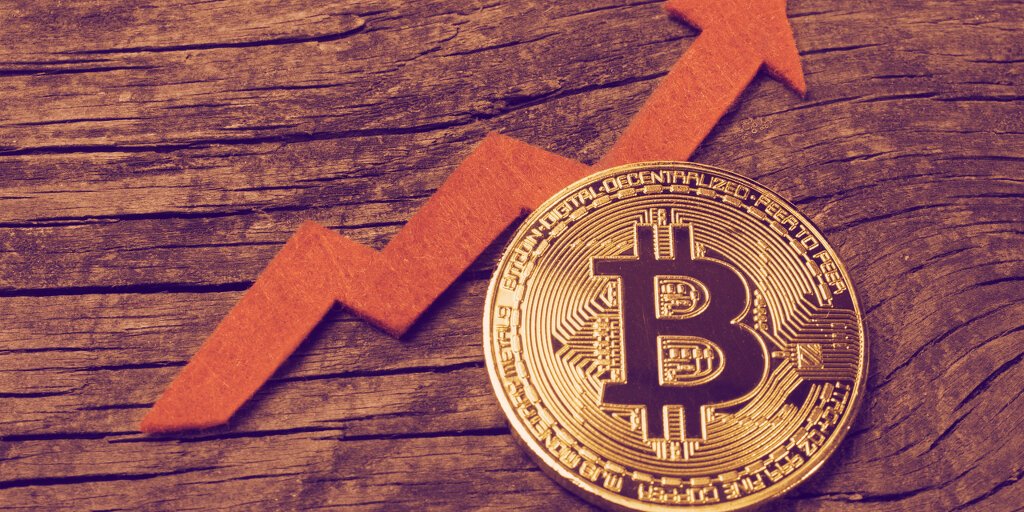 BTC has been charging upward since bottoming out at just below $30,000 on July 20. Much of that price movement has come since the end of a lackluster September; it’s up nearly 50% in that period.

The working theory is that Bitcoin’s price rose mainly due to the prospects of the U.S. Securities and Exchange Commission (SEC) permitting a Bitcoin futures ETF proposal to go through—for the first time. However, the price stalled over the weekend after it became clear the SEC would allow the ProShares Bitcoin Strategies ETF—which is backed by Bitcoin futures—to begin trading on Tuesday.

Now that ProShares is officially on the market and doing boffo business—with other Bitcoin futures ETFs on the way—the price has been inching back up.

A Bitcoin exchange-traded fund, or ETF, is a financial instrument that tracks the price of BTC and trades like a stock. Though the SEC has yet to approve such a securities instrument, doing so would allow main street investors to easily incorporate Bitcoin ownership into their retirement plans. The upshot: higher demand for BTC.

The Bitcoin futures ETF offered by ProShares functions differently. Instead of tracking the price of Bitcoin at any one moment, it tracks where investors think the price will go. Bitcoin futures are already traded on multiple derivatives exchanges, including the Chicago Mercantile Exchange (CME). Though an exchange-traded fund based on Bitcoin futures is a less direct method of exposure, SEC Chair Gary Gensler has suggested he’s more kindly disposed to them, given their in-built consumer protections.

In a report last week, Arcane Research pointed to statistics on the CME Bitcoin futures exchange showing that institutional investors were indeed coming back online as the price pushed upward.

“I think the bitcoin ETF discussion we have seen lately [has] attracted institutions,” Arcane Head of Research Bendik Norheim Schei told Decrypt. “Maybe they are trying to front-run a possible decision next week, but interest has certainly picked up among institutional investors in October.”

No one’s sure that the price of Bitcoin will stay as high as it is. Dan Morehead, CEO of Pantera Capital, had suggested the bull run might quickly take a turn as soon as a Bitcoin ETF becomes official. Or it might start tanking by the end of the trading day.

“On Wall Street, there’s a saying ‘Buy the rumor, sell the fact,” Morehead wrote in a note to investors on October 6. “Definitely working in our space.” The CEO pointed to a -83% bear market that began the same day after Bitcoin futures were listed on CME; the Coinbase direct listing led directly to a -53% bear market, he said.

At the moment, though, Bitcoin, the most dominant cryptocurrency, is helping propel the entire crypto market upward.

And strong showings by other assets have pushed the global market cap past $2.68 trillion—another record in its own right. Ethereum, which instituted a deflationary mechanism in early August, is worth 11% more than it was this time last week.

Polkadot, the eighth-largest crypto asset, is ready to become fully functional within a month; it’s up 20.6% on the week. And Solana, which continues to make forays into spaces long dominated by Ethereum, has added 6.4% to its price tag.