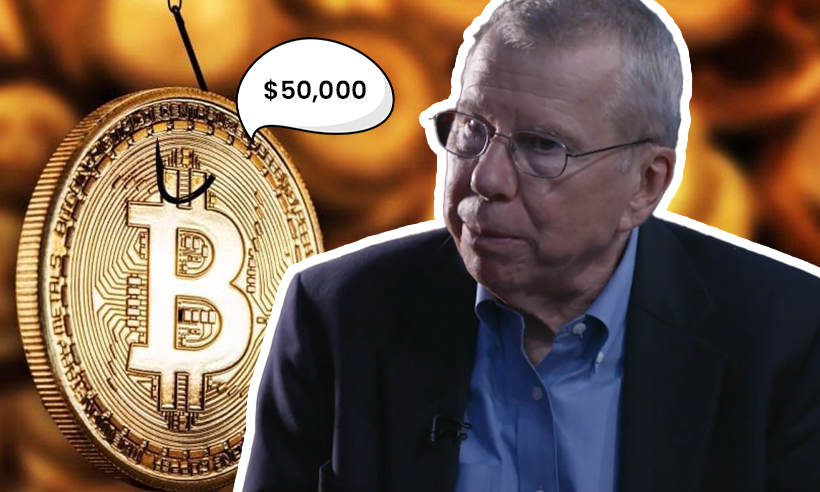 Financial analyst John Bollinger is upbeat on Bitcoin prospects. The creator of Bollinger Bands believes that the worst is over for the digital asset and its “first real target” is the bottom of its previous range.

Bottom in place, prices trying to move higher, first real target is the bottom side of the prior range, call it 48 to 50k. Play it as it lays. $btcusd #Bitcoin

Bollinger Projects Bitcoin is on Track to Reach $50,000

In a recent tweet posted to his account, John Bollinger claimed that Bitcoin has already bottomed out. He projects that BTC is set to surge up to “48 to 50K”, a range that represents the bottom of the currency’s previous price levels.

Bollinger’s forecast is in contrast with the outlook presented by prominent investment institutions like JPMorgan. The multinational investment bank had warned investors against the current backwardation in the bellwether currency in its recent analysis.

Meanwhile, after a series of positive announcements, BTC value has appreciated over the last few days. The flagship cryptocurrency is trading at nearly $41,341, its highest level since the third-biggest price correction in May.

Venture capital investor, Tim Draper is bullish on Bitcoin’s future. During an interview with CNBC, Draper predicted that the primary virtual currency will beat its odds of volatility and trade at $250,000. He also suggested that BTC would become central to all financial services in the next 20-30 years.

Draper opined that many companies would follow Microsoft, Starbucks, Paypal, and Homedepot and adopt Bitcoin as a payment method. He stated, “Give it about a year and a half and retailers will all be on Opennode [A bitcoin payment processor], so everybody will accept bitcoin.”

According to Draper, Bitcoin’s limited supply of only 21 million coins in circulation will fuel its meteoric rise and place it in the same league as Amazon and Microsoft. The billionaire is a well-known BTC HODLer, but he refrained from divulging any details on his holdings.

Furthermore, Draper joined a growing chorus of DOGE critics and pointed out that its only quality is to bring humor to the crypto community. “There must be something to Dogecoin because it makes us all smile but no engineers are working on it,” he noted.

Draper’s latest statements are a reiteration of his stance that he outlined at the beginning of 2020. Back then, he revealed that the stock market is no longer emerging and that he intends to diversify his portfolio with cryptocurrencies instead.