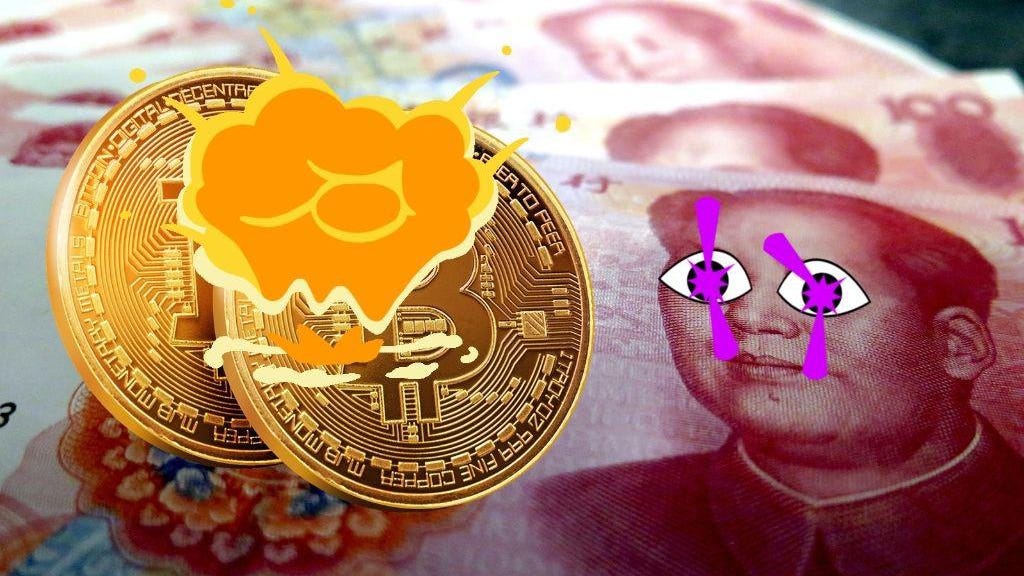 KaPow! China’s government keeps trying to blow up BItcoin. In some ways, they’ve succeeded as over … [+] the last six weeks the value of the world’s leading crypto currency has lost around 30%.

Bitcoin is still down. And I’m still blaming China for it.

Last month, China banned Bitcoin mining in some inland provinces. It came at a bad time. Fresh off touting Bitcoin and Dogecoin as the next best thing after the dollar and the euro, Elon Musk said Bitcoin was bad for the environment and he was no longer accepting Bitcoin as payment for his Teslas. Bitcoin sunk. Alt-coins sunk. People blamed Musk. It was mostly China’s fault. And still is. Can we please move on now?

It seems China has shot itself in the foot by going after its Bitcoin miners. The U.S. is becoming a big time miner in its wake. Kazakhstan is a top three now. Now that the Bitcoin algorithm has re-calibrated to count for fewer China miners, we don’t need China anymore.

“Miners are actively migrating from large farms and taking out the equipment. We assume that industrial mining in China is dead,” says Oleg Kurchenko, Founder and CEO of Binaryx, a crypto currency exchange headquartered in Estonia.

China is also going against mining because it is against Bitcoin in general and wants to run its own digital currency, their digital yuan. Some smart economic pundits like Nassim Taleb think that governments, like China, are going to bring Bitcoin down to zero. The notion of Central Banks (like the Fed) driving a nail into Bitcoin’s coffin is starting to circulate among some crypto investors, especially after Jerome Powell said last week that a “digital dollar is a high priority” for the Fed. Powell has also called cryptocurrencies “not useful stores of value.”

Jerome Powell: we are working on a digital dollar. And…Bitcoin is not a good store of value.

Clearly, Beijing thinks the same thing. They’ve had it with Bitcoin over there. For various reasons. Their digital yuan rollout is one of them. Keeping control of a powerful currency, of course, is another one, but every government wants to do that.

China’s ban on crypto miners and exchanges has been going on and off since 2018, says Ian Lowe, CEO of the three year old start up Dacxi, a blockchain platform and coin run out of Australia. Dacxi operates what they call a Crypto Wealth Platform for new retail crypto investors.

“China’s more recent enforcement of these bans is in large part to de-risk the release of their own digital currency.  A digital yuan will provide unprecedented government oversight on every aspect of the Chinese economy, including making it more difficult to transfer wealth out of China,” he says, which is the main reason why Beijing hates cryptocurrencies, especially Bitcoin.

“The mining ban has clearly impacted the efficiency of the Bitcoin blockchain in the short term, but it’s unlikely to have an enduring effect on the value of Bitcoin, because its utility and breadth of ownership has become too vast,” says Lowe.  “Will governments look to ban Bitcoin?  It’s possible.  But sophisticated, regulated economies will simply regulate it in the same way they regulate financial markets already.  Very few governments see the sense in pushing the trading of Bitcoin exclusively into unregulated environments.”

Over the last month, when China has taken another of its famous pop-shots against Bitcoin, the lead cryptocurrency is down over 20% with no real relief in sight.

Bitfarms, a new listing in the BTC mining space, has done even worse than the Grayscale Bitcoin ETF. … [+] Gold has been a dud, too. While the S&P 500 continues to be steady as she goes.

The overall network hash rate for Bitcoin decreased by 40% initially as Chinese miners went dark. Once dominant, the mining pools concentrated in China are no longer omnipotent. If Bitcoin aficionados hate centralization, Bitcoin mining (like clothes and solar panels and iPhones and…) were centralized in China.

Changes in the cryptocurrency world are happening fast, says Kurchenko. “Soon, the transported miners will operate at new locations in zones with loyal jurisdiction and low-cost electricity.”

That’s already happening. Witness Kazakhstan’s rise. Why Bitfarms of Canada is still such a loser stock I will never know. I own it. I’ll keep buying it for a little while longer. But for Bitcoin investing, I’m on hold and…dare I say it…hodling.

“During the last sharp rate drop of cryptocurrencies, small traders closed their positions,” says Kurchenko. “It was predictable.”

Still, now that the China mining crisis is behind us, will we see $60,000 Bitcoin again? Or was that the moon landing and now we are moving on? Markets seemed more sure of Bitcoin $50,000 back in the fall of 2020 then they do Bitcoin recovering back to its all-time-high in the $60,000s.

“This was not the first time the Chinese government went against Bitcoin,” says Kurchenko. “When the market is stuck in a bearish mood, it’s difficult to predict when the next crypto madness will happen and if Bitcoin will reach its prior price highs.”

Some in the cryptocurrency business think a new change to Bitcoin in the fall could push its value … [+] higher, China or no China.

Dave Haggard, the head of startup company Ultrasafe.Finance, says he is “very bullish on the future and months to come for Bitcoin. I feel like the worst is now behind us (on China mining).”

Haggard mentioned the Taproot upgrade coming in November that could be a signal for a higher price point coming in the months ahead.

Pay attention to that, Bitcoin retailers on Gemini and Robinhood.

The ups and downs of Bitcoin may persist for the rest of the summer as markets worry about inflation. Bitcoin doesn’t seem to be a beneficiary of inflation hedges at the moment.

“The upcoming Taproot upgrade should push Bitcoin back up and once we hit the next halving, Bitcoin will hit huge all-time-highs,” says Haggard, adding: “Bigger than any we have seen so far this year.”