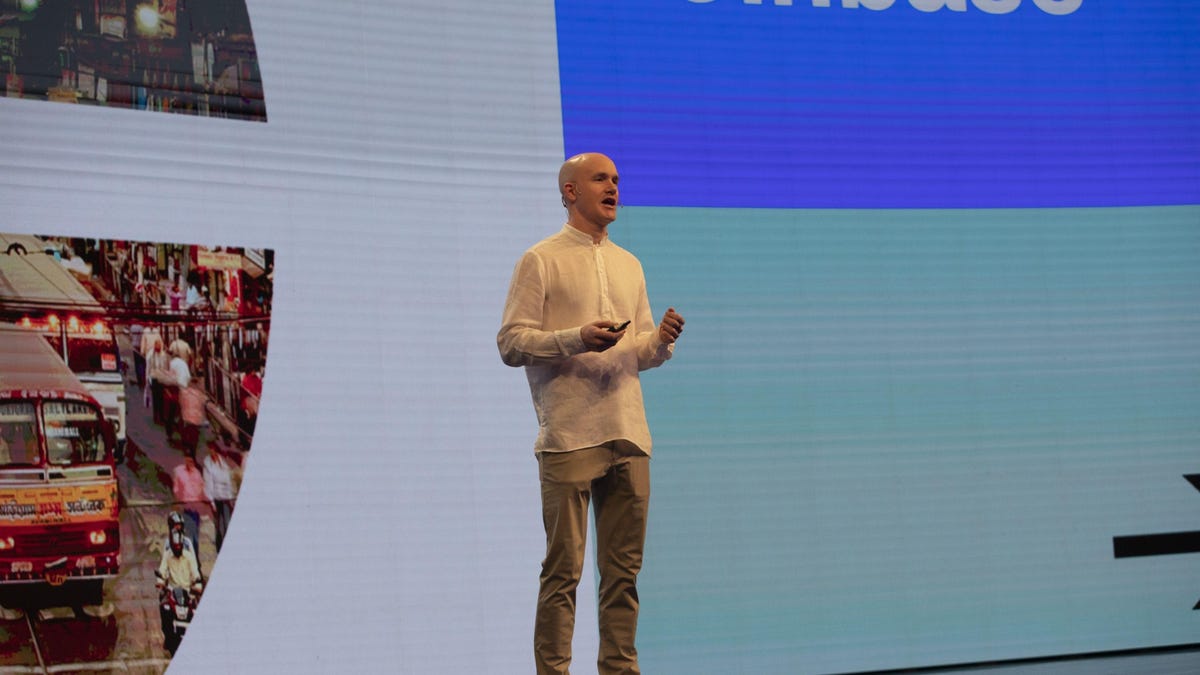 🔊 Listen to this: Sam Bankman-Fried and Matt Levine on how to make money in crypto

Cryptocurrency prices have dropped sharply overnight, with bitcoin losing more than 3% since this time yesterday. Ether ETH eum is down by almost 5% while Ripple’s XRP XRP is leading the top ten lower, down nearly 8%. Despite losing almost 3% over the last 24 hours, Terra’s luna is still up 10% on this time last week.

The bitcoin price has lost around 17% since the beginning of the year, with the ethereum price … [+] falling even further. XRP is down by 22% while Terra’s luna has managed to hold more or less steady.

The sudden crypto sell-off mirrors stock markets in Asia and Europe than have dived due to growing fears that China’s latest Covid lockdowns are spreading to Beijing.

Good to know: A slew of crypto-focused Super Bowl ads failed to drive an influx of retail investors

Coinbase founder and chief executive Brian Armstrong Brian Armstrong spoke in India earlier this … [+] month following an announcement the crypto exchange will triple its headcount in the country.

Not all assets: Coinbase COIN chief executive Brian Armstrong, one of the most influential voices in the world of crypto, has weighed in on what the future crypto regulatory landscape could look like as the U.S. Securities and Exchange Commission (SEC) lobbies for more powers and after the Biden administration issued an executive order directing federal agencies to thrash out rules for the crypto space. Armstrong, speaking on the latest episode of the All-In Podcast, predicted the crypto industry will likely not be regulated solely by the SEC because not all digital assets should be considered securities.

Oddities: “[Bitcoin BTC is] pretty clearly a commodity,” Armstrong said. “Many of these [cryptocurrencies like ethereum are] commodities that probably should be regulated by the commodities [regulator], or the Commodity Futures Trading Commission.”

But but but… Armstrong does think some cryptocurrencies, such as companies raising money with an initial coin offering (ICO), fall under the SEC jurisdiction and repeated his regular call for “more clarity.”

Zoom out: In September last year, the SEC threatened to take legal action against Coinbase if it followed through with plans to launch a crypto lending product, with Armstrong going on the offensive and accusing the regulator of “skipping basic steps” and jumping straight to litigation without providing guidance to the industry.

Big Apple AAPL : Elsewhere, Armstrong last week said he believes Apple’s App Store rules have impeded Coinbase’s product roadmap, accusing the iPhone-maker of banning features from their app and generally not being friendly to the cryptocurrency industry. “Apple so far has not really played nice with crypto, they’ve actually banned a bunch of features that we would like to have in the app, but they just won’t allow it—so there’s potential antitrust issues there,” Armstrong told the Superteam Podcast.

Ripples in the water: Meanwhile, the SEC’s long-running legal battle with Ripple, the crypto company behind XRP, could now run well into next year, according to a crypto legal expert. The SEC sued Ripple over a year ago, alleging Ripple conducted an illegal securities offering through sales of XRP, the world’s sixth-biggest cryptocurrency.

🗞 News reports emerged overnight that Twitter could reach a deal to sell itself to Tesla TSLA billionaire Elon Musk as soon as this week, potentially bringing to an end one of the most tumultuous months in Twitter’s history.

🤖 Crypto has played an outsized role in Musk’s free speech-inspired bid for Twitter, with his dislike of verified, scam crypto bots one of his biggest gripes with the service. Yesterday, Musk again shared his thoughts on how to improve the meme-based bitcoin rival dogecoin, sparking fresh speculation doge support could be added in to a Musk-controlled Twitter.

💸 Last week, it was announced that Twitter has added support for some users to get paid in crypto via payments processor Stripe. CNBC has a write-up.

Good to know: Twitter founder Jack Dorsey is not a CEO, he’s the block head

👀 Look out for these cryptocurrency and crypto-adjacent events this week.

🧾 Today, European Union lawmakers will discuss how to tighten up tax laws and procedures for the web3 era after internal EU documents last week revealed the extent of anti-bitcoin talks among officials. Coindesk has the details.

📊 In economic data, the first estimate for first-quarter U.S. GDP is out on Thursday and the Federal Reserve’s preferred inflation measure, the personal consumer expenditures index, is out Friday.

🎪 On Saturday, Warren Buffett’s Berkshire Hathaway BRK.A will hold its “Woodstock for capitalists” annual shareholders meeting in-person for the first time since 2019. Buffett and his right-hand man Charlie Munger are two of the most high-profile critics of bitcoin and crypto.