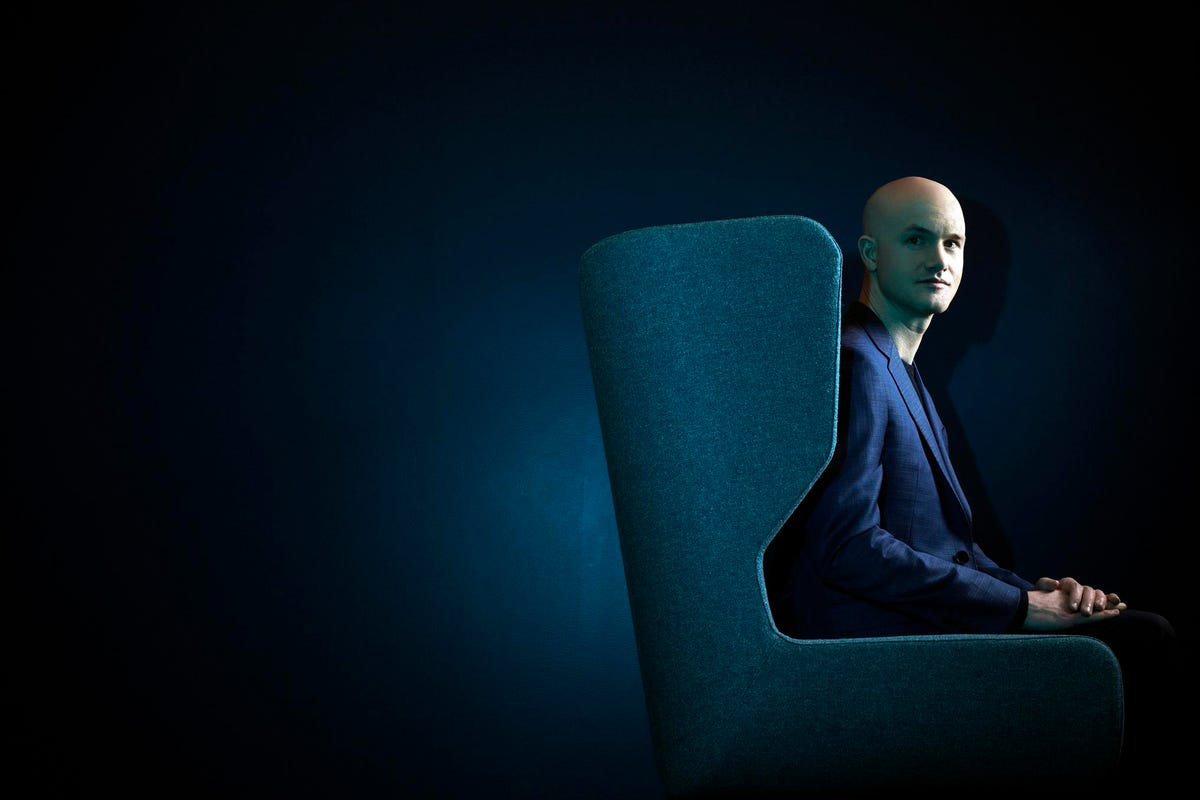 Brian Armstrong, founder of Coinbase, photographed for Forbes by Jamel Toppin in January 2020.

The Department of Justice (U.S. Attorney’s Office for the Southern District of New York) announced charges yesterday against Ishan Wahi, a former product manager at Coinbase, his brother, Nikhil Wahi, and a friend, Sameer Ramani. They are accused of “wire fraud conspiracy and wire fraud in connection with a scheme to commit insider trading in cryptocurrency assets by using confidential Coinbase information.” Specifically, the DOJ charged that the individuals used confidential non-public Coinbase information about cryptocurrency assets to be listed on Coinbase’s exchanges to front-run expected price jumps. The insider-trading scheme allegedly earned them more than $1.1 million in illicit gains.

The SEC also announced that it filed civil charges against the individuals over the alleged scheme. The civil charges allege that Nikhil Wahi and Ramani allegedly purchased at least 25 crypto assets, at least nine of which were securities, and then sold them shortly after the announcements for a profit. The nine assets mentioned in the SEC complaint include AMP (AMP), Rally (RLY), DerivaDEX (DDX), XYO (XYO), Rari Governance Token (RGT), LCX (LCX), Powerledger (POWR), DFX Finance (DFX), and Kromatika (KROM). According to Coinbase, 7 of the 9 mentioned assets are listed on Coinbase’s platform.

Ishan Wahi attempted to flee to India ahead of a scheduled interview by Coinbase’s security department, but he was prevented by law enforcement from leaving. Ishan Wahi and Nikhil Wahi were arrested on Thursday morning in Seattle, and Ramani remains at large.

This is not the first time that Coinbase’s employees have been accused of insider trading. Many in the industry have long pointed out that Coinbase’s API leaked information regarding future listings on Coinbase. In April 2022, Coinbase confirmed they received reports of people appearing to buy certain assets right before they announced they’d be listed on Coinbase, allowing them to benefit from price movements that sometimes accompany our listing announcements.

This also isn’t the first time the DOJ has charged a former employee of a crypto related company with insider trading. On June 1, 2022 the DOJ announced charges against Nathaniel Chastain, a former product manager at Ozone Networks, Inc. d/b/a OpenSea (“OpenSea”), with wire fraud and money laundering in connection with a scheme to commit insider trading in Non-Fungible Tokens, or “NFTs,” by using confidential information about what NFTs were going to be featured on OpenSea’s homepage for his personal financial gain.

Yesterday’s announcement serves as another reminder that traditional financial rules apply to the cryptocurrency industry and as the popularity of cryptocurrency and NFTs has increased, so has the focus of regulators.

However while the SEC is alleging in its complaint that 9 tokens are securities, it has not indicated that it will take any action against Coinbase for listing these tokens. If the SEC obtains convictions, the rulings in this case will not be legally binding on Coinbase as they are not listed as a defendant.

Still, the lawsuit by the SEC raises questions about what is next for token issuers and exchanges.

Since 2018, the SEC has been criticized by the industry for regulating the crypto space through enforcement actions. The regulator has taken the position that almost every token and ICO currently listed by exchanges is an unregistered security, and it is currently entangled in a $1.3 billion lawsuit against crypto payments firm Ripple over its own sale of XRP. Ripple chose to defend the lawsuit rather than settle.

In the past, former officials of the SEC have made statements that the SEC does not consider Bitcoin or Ethereum to be securities. However, just last month Chairman Gary Gensler told CNBC he would only say for certain that Bitcoin is not a security and avoided questions about Ethereum

CFTC Commissioner Caroline Pham yesterday expressed similar frustration, saying this is “a striking example of ‘regulation by enforcement’” by the SEC.

“In an alarming strategy, the Commission directly pursues only the individual actors (as opposed to Coinbase and the token issuers) who lack the resources and the motivation to litigate the securities laws implications of the case. The SEC can expect an easy win and a federal opinion (or settlement) that implies that the alleged securities are securities in fact, which the SEC can then leverage against its more challenging enforcement targets.” – Joshua Rivera, General Counsel, Blockchain Capital

The SEC has indicated that it believes most tokens listed on exchange are securities, which would also mean that exchanges that list such tokens are operating as unregistered broker dealers/ATS’s. That said, back in June 2018, Coinbase announced it would acquire securities dealer Keystone Capital in a bid to become a fully SEC-regulated broker dealer. It does not appear the SEC/FINRA ever approved that broker dealer for use for digital assets.

In June 2021, Coinbase announced it would suspend trading of XRP in light of the SEC lawsuit against Ripple claiming the token was a security. The price of XRP fell 24% in 24 hours as exchanges began delisting.

Last year, the SEC also threatened Coinbase with a lawsuit over its interest-earning Lend product and that resulted in the company terminating its plans to launch this product.

Coinbase appears to be responding to the SEC differently this time around. Yesterday, Coinbase filed a petition asking the SEC to begin rulemaking on digital asset securities, saying the existing rules for securities do not work for digital assets. The petition calls on the SEC to develop a workable regulatory framework for digital asset securities guided by formal procedures and a public notice-and-comment process, rather than through arbitrary enforcement or guidance developed behind closed doors.

Coinbase attempted to note an irony in the role of the SEC. While the SEC is tasked with investor protection, it argues that the SEC’s approach to crypto regulation through enforcement actually creates more risk for investors. Coinbase noted that when the SEC brought an enforcement action against Ripple, after years of taking no action against them, the value of XRP dropped immediately, costing investors huge sums of money.

In another Coinbase blog post from yesterday titled “Coinbase does not list securities. End of story” the company defended its asset listing process. Coinbase asserts “seven of the nine assets included in the SEC’s charges are listed on Coinbase’s platform. None of these assets are securities.”

According to the blog post, Coinbase has a rigorous process to analyze and review each digital asset before making it available on our exchange — a process that the SEC itself has reviewed. This process includes an analysis of whether the asset could be considered to be a security, and also considers regulatory compliance and information security aspects of the asset.

Some of the industry noted that Coinbase appeared to be using this as an opportunity for spinning this into positive media coverage.

The SEC is likely hesitant to file suit against Coinbase, who has the means to aggressively litigate, especially in light of how the Ripple litigation is going for the SEC.

The SEC charges puts Coinbase on notice that the SEC views these tokens as securities. An SEC conviction would imply the alleged securities are in fact securities.

Although such an event would not be legally binding on the token issuers or Coinbase or other exchanges, the decision would imply the alleged securities are in fact securities, which the SEC can then leverage against its more challenging enforcement targets.

While the SEC has only accused the three named individuals of breaking the law. The SEC is also clearly implying that the related token companies broke the law by failing to register their projects as securities and by operating an unregistered national securities exchange. However, because the complaint only names three individuals, the token companies and Coinbase cannot defend these claims in court at this time.

An SEC win in this case will likely mean exchanges feel pressure to delist these tokens. Crypto exchanges will also likely continue to explore how to approach registration with the SEC/FINRA as a broker dealer/ATS. Coinbase appears ready to take on the SEC in arguing these named tokens are not securities and that clearer regulation is long overdue. This likely means Coinbase won’t delist these tokens, at least immediately.