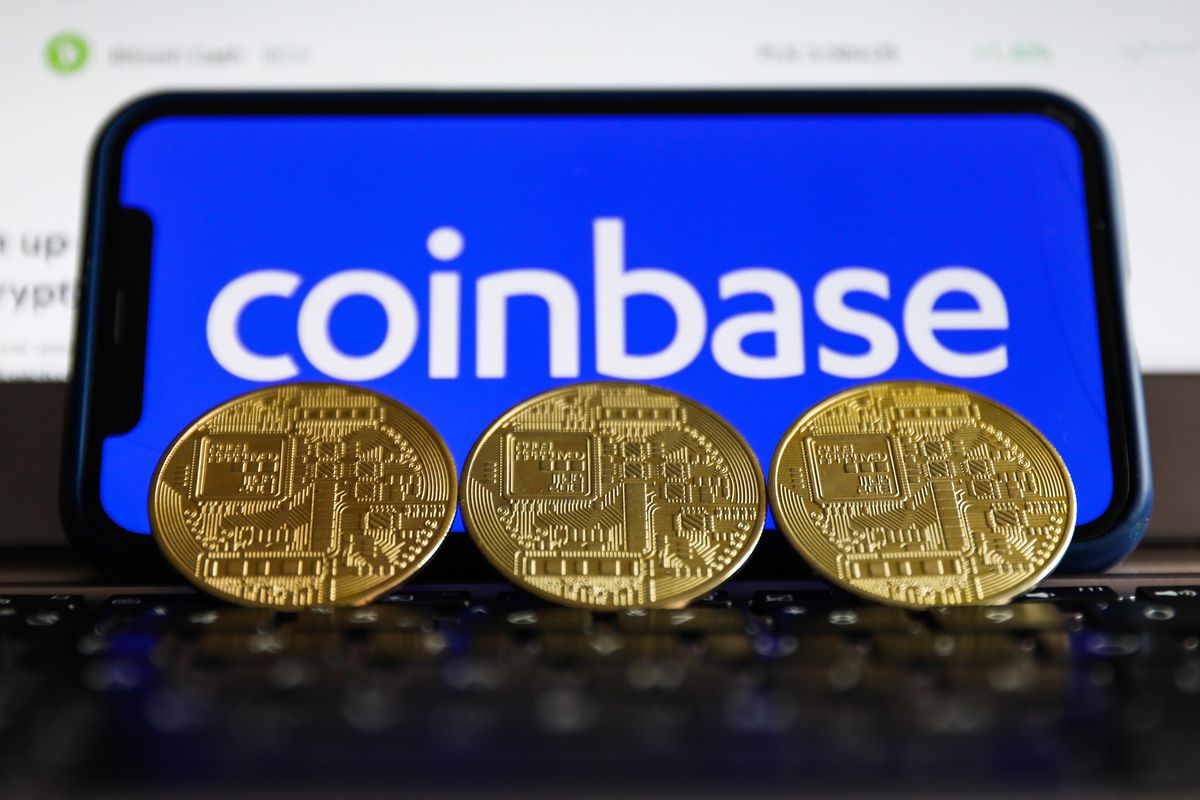 Coinbase logo displayed on a phone screen and representation of Bitcoin are seen in this … [+] illustration photo taken in Krakow, Poland on April 15, 2021 (Photo by Jakub Porzycki/NurPhoto via Getty Images)

Incumbents like the fees that they charge players to trade crypto and the interest they extract to leverage their risky wagers. At the same time, regulators require banks to know their customers (KYC) so they don’t launder criminals’ money.

Sadly the most basic principle of cryptocurrencies is embedded in their name — the people who own it do so anonymously.

When prices fall, crypto exchanges demand that account holders top off their accounts with cash — failing that the accounts are automatically liquidated.

What’s more. crypto demand would decline if the government decide to punish — or impose disclosure costs — on financial institutions who get involved in crypto trade.

These market dynamics are not helpful for the growth potential of Coinbase — whose stock has lost 32% of its value since peaking on April 14.

Should you buy Coinbase at its lower price? I would be more favorably inclined to say yes if three problems affecting Coinbase could be solved

No doubt those who have been riding the bitcoin pony since the beginning of 2020 don’t care much about that little hiccup. After all, its price “more than tripled in 2020 and doubled to start 2021 before slipping,” noted the Journal.

Will the Treasury Department charge financial institutions with allegedly “using cryptocurrencies to launder money”? The Journal reported that this rumor appeared on Twitter, was magnified by some media outlets, and prompted no comment from a Treasury Department spokesperson.

Not surprisingly, the volatility in crypto is fueled by emotion and thinly collateralized debt. The result of the drop in crypto prices cost traders $10.1 billion on April 17 — more than 90% of the funds liquidated were due to highly leveraged bullish bets on bitcoin.

Binance, which leads the world in crypto trading volume, accounted for about half the crypto liquidations — many of which were automatic. That’s because Binance and other exchanges, “let individual investors deposit a relatively small amount of money upfront to place an outsize bet,” reported the Journal.

If bitcoin’s price falls, account holders must deposit more money into their accounts or the exchange automatically liquidates their holdings — creating what Chris Zuehlke, global head of crypto trader Cumberland, called the “potential for a series of cascading liquidations, happening back to back to back.”

Why not? For some futures contracts, Binance allows 125 to 1 leverage — meaning they can “deposit just 80 cents to amass the equivalent of $100 of bitcoin.” noted the Journal.

Coinbase Falls From Its Post-IPO High

Coinbase, the largest U.S. crypto exchange about which I wrote April 13, has suffered a nearly 32% drop in value since it peaked at a market capitalization of $85 billion on April 14 — its first day of trading.

In my view, there are two problems with crypto that must be solved and one with Coinbase’s business model before I would be comfortable owning Coinbase.

The regulatory problems that keep crypto out of the mainstream

There is considerable uncertainty about how governments will regulate crypto. In February, a Bank of America report warned of its risks and the potential for market disruption due to anti-privacy government measures, according to CoinDesk.

The report notes that crypto challenges the ability of governments to impose taxes and control capital flows into and out of their jurisdictions.

Depending on how it is regulated, the U.S. could ban all institutions and intermediaries from conducting crypto transactions or it could “increase customer information reporting and access requirements” for such exchanges, according to CoinDesk.

Bank of America’s report concludes that given this high level of regulatory uncertainty, investors should “approach digital assets cautiously.”

The ease with which hackers steal it

The 2020 attacks fell into three categories:

Ethereum apps. Decentralized apps running on the Ethereum platform had 47 attacks (January 2021 value $437 million) Cryptocurrency exchanges had 28 attacks (valued at $300 million in losses as of January 2021) Blockchain wallets. $3 billion worth of losses were due to 27 attacks on blockchain wallets — with an average of $112 million per wallet hacking event compared to about $10 million per attack on Ethereum apps or exchanges, noted ZDNet.

For an in-depth look at how North Korea has stolen at least $1.75 billion in crypto — accounting for some 10% of its defense budget — read this New Yorker article.

86% of Coinbase’s 2020 revenue came from trading commissions. In the first quarter of 2021, Coinbase took in a transaction fee of 0.46% — that is 46 times higher than the fee charged by NASDAQ and NYSE.

Crypto trading rivals such as Gemini, Bitstamp, Kraken, Binance, and others, MarketWatch notes, could drive down transaction fees to zero — which would cut into Coinbase’s revenue.

One analyst sees the risk of pricing pressure offsetting opportunities for the stock to go up. According to MarketWatch, analyst Dan Dolev at Mizuho wrote “Over time, COIN’s fees may face downward pressure from competing platforms following the footsteps of zero-commission stock trading, because platforms like PayPal and Cash App primarily use crypto trading products as engagement tools.”

Dolev noted that a survey of several hundred bitcoin traders found that 55% of them considered “low transaction fees” as second behind “security” as factors they use to choose among crypto trading app platforms.

He also highlighted that there is “significant overlap” between users of Coinbase, PayPal, and Square’s trading platforms.

This makes me think that Coinbase must either reduce its fees, offer a new, valuable service to customers that rivals can’t easily copy, or lose much of its revenue.