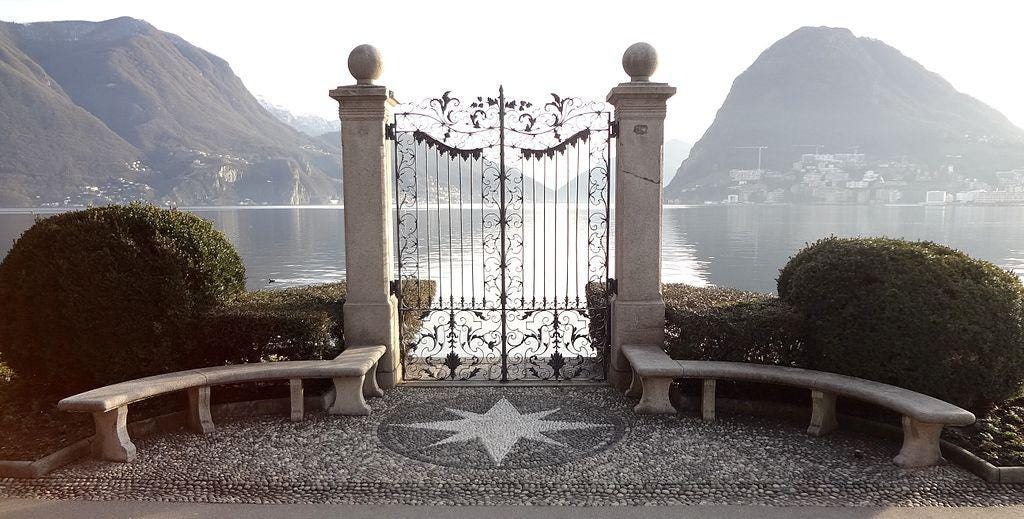 The gates in Parco Ciani, Lugano

El Salvador’s decision to make bitcoin legal tender provoked a mixture of delirium and derision when it was announced last year.

Among supporters of the cryptocurrency, the news was received as long-awaited proof that bitcoin has entered the financial and economic mainstream. Among critics – including leading institutions like the World Bank and the International Monetary Fund – it was dismissed as a dangerous gamble by an economically illiterate South American dictator.

The subsequent revelation that Lugano, an Italian-speaking city in the south of Switzerland, is also embracing bitcoin received much less attention from the media – perhaps because it was a mayor, not a president, making the announcement; and a city, not a country, adopting the cryptocurrency.

Yet Lugano’s “Plan B” experiment could be every bit as important in determining the success or failure of bitcoin – the world’s first credible attempt at a decentralized, digital currency (or “magic internet money”, as it’s often playfully called).

The city’s mayor, Michele Foletti, is not wading into the cryptosphere alone.

Over the past few years, Switzerland has been quietly positioning itself as a hub for companies developing the blockchain technology on which bitcoin is based. The rich Alpine country – long synonymous with financial innovation and libertarianism – has overhauled its legal landscape to protect crypto investors, eyeing billions of dollars of institutional money that’s looking for a safe, reputable way into the market. It’s even given regulatory approval to two “crypto banks” – Seba Bank and Sygnum – the former based in Zug, a small town just south of Zurich, whose chocolate-box medieval streets are home to about half of Switzerland’s 1,000 or so crypto start-ups.

Lugano, though, doesn’t just want to challenge Zug’s title as the “Crypto Valley” of Switzerland, Foletti says in an interview in his extravagant, Palazzo-style city hall. It wants to become the “European capital of bitcoin”. And it’s recruited some of the industry’s biggest names to help deliver that vision.

The mayor’s main ally is Paolo Ardoino, chief technology officer at Bitfinex, the crypto exchange behind the world’s most popular stablecoin, Tether (USDT), and the man ultimately charged with forging a technological path forward for Plan B.

“Crypto people are nomadic and tribal,” Ardoino tells me, pointing to the emergence of blockchain hubs elsewhere in the Americas and Asia: in El Salvador, Miami, Dubai, Singapore and Hong Kong. “They like to move in the places where they feel at home; where they feel that their technology is supported; that their beliefs have recognition. We like what we’re doing, so we want to find a place where we can all settle together.

“But it’s clear that, in Europe, there is no hub. So that is really the missing piece.”

Ardoino’s belief in bitcoin and cryptocurrency as a force for good is genuinely palpable. He talks about the technology as if it’s more of a social movement than a business sector, and – when measured against this benchmark – he doesn’t hide his opinion that Zug is falling short of its potential.

“We have seen that the other towns in Switzerland were not doing enough. It was kind of like crypto support in name only. Zug, for example, is a place where there are PO Boxes. Everyone has a company in Zug. But how crypto can really affect a city – how crypto can affect the local community – noone knows that. Bitfinex is helping El Salvador figure that out. We want to show that crypto can bring a huge benefit to local communities … If you create a place where people can spend in their preferred cryptocurrencies, they will all travel there. But again, on this side of the pond, there was really not much going on.

“So, led by the administration, we met in November and we started discussing how we can actually make Lugano the city for bitcoiners, the city for crypto in Europe.”

Plan B, on paper, looks like a straightforward municipal investment scheme. Tether is convening two funds: a 100 million Swiss franc ($106 million) investment pool for blockchain start-ups, intended to coax the great and the good in the industry to make Lugano their home; and a 3 million franc fund for local businesses and merchants, which will help them transition to the new, crypto-powered economy. The local government has also committed to accepting bitcoin payments for all public revenue streams: taxes, parking permits, museum passes, naturalization fees and even funeral costs.

Build and they will come

Within one month of unveiling Plan B, more than a dozen companies with several hundred million dollars of assets had appointed legal advisors and fiduciaries to begin moving their operations to Lugano.

“We’ve seen huge interest,” Ardoino claims, “from Zug, but also from Dubai and Italy and many other places in the world.”

The highest-profile supporter to date is Polygon, the digital platform behind the MATIC cryptocurrency, which is preparing to relocate three of its subsidiaries and a significant number of employees to the Swiss city. Polygon joined Plan B as a founding infrastructure partner; its blockchain will be the rails on which most of Lugano’s stablecoin payments are settled.

Foletti says he’s encouraged by the warm response that Plan B has already received from across the industry. But he stresses that attracting corporations and balances sheets will not, by itself, make the ambitious project a success. “We look for the people and less for the companies,” the mayor insists. “I see that if the people come to Lugano – if they work on the blockchain – then they will build our community. Afterwards, maybe more companies will come to Lugano. But, first, we need to have the people that live with crypto, work with crypto.”

“They need to be part of the ecosystem, of the growth of the city.”

Details of the scholarships are still being finalized with Lugano’s three universities, but Foletti says they’ll encompass a broad range of courses – both existing and new – that will be tailored to the needs of a rapidly expanding blockchain marketplace. That includes not just crypto-oriented computer-science degrees, but also business management, marketing, financial risk management, accountancy and so on. The first specialized course will start in July. “In a way, it’s cheaper to invest in scholarships than to keep fighting to hire someone from another company,” Ardoino notes. “We believe this is probably the wisest investment that the city and the private companies supporting the city can make.”

First, though, Lugano needs to show the students, blockchain professionals and entrepreneurs in its crosshairs just how serious it is about embracing bitcoin as real money – a practical, convenient medium of exchange; the lifeblood of the local economy.

Lugano could follow El Salvador’s example by forcing local merchants to accept bitcoin, but it’s not going to. Ardoino emphasized the importance of “treating everyone with respect” and allowing people to make choices for themselves.

Plan B’s carrot-over-stick approach will, instead, give shops three options: do nothing; accept a free crypto-enabled Point Of Sale (POS) payment terminal from the local government; or wait for their existing POS operator to upgrade their system in support of cryptocurrency. Plan B’s 3 million franc adoption fund will cover the cost of producing the new terminals, as well as providing grants to POS operators active in the city to help them upgrade. Once a shop is equipped with a smarter terminal, its customers can pay with bitcoin simply by scanning a QR code. The retailer can configure its terminal either to convert balances to francs automatically, or to retain part or all of them in crypto.

As is the case in El Salvador, payments will be processed over the second-layer Lightning network – a protocol built on top of bitcoin’s primary blockchain, which enables virtually instant, virtually zero-cost transactions without compromising on security.

Shoppers will also be able to pay with two stablecoins: US dollar-pegged Tether; and LVGA, a new cryptocurrency developed by Lugano that’s pegged to the Swiss franc.

Led by the LVGA token

LVGA played a crucial role in laying the groundwork for Plan B. The city launched its loyalty program-styled cryptocurrency in the early stages of the Covid-19 pandemic, seeking both to give a helping hand to local consumers – purchases from participating shops and restaurants come with 10% cashback in LVGA – and to encourage more hygienic cashless payments. By attaching a financial incentive to the stablecoin, Lugano has so far convinced nearly 6,000 citizens – about 10% of its population – and 300 retailers to start using the MyLugano app, which will now become Plan B’s official digital wallet for bitcoin and Tether. (Other Lightning-powered wallets will also work in the city.)

That, in part, explains why the people of Lugano have taken Plan B – an initiative that might have created shockwaves elsewhere in Europe – largely in their stride.

“Not so much surprised, they were excited when they heard about the announcement,” Foletti recalls. “The citizens have seen what has been happening with the LVGA token … They know it allows them to pay less and to start accruing some benefits.”

As well as enticing consumers to the cryptosphere, LVGA presents a compelling – if nuanced – argument for merchant adoption. Balances in the stablecoin can only be redeemed within the local economy, creating circular demand and enabling a cashback rate that would otherwise not be sustainable. Future payments in bitcoin and Tether will not attract 10% cashback, but the concept has nonetheless opened retailers’ eyes: highlighting potential savings of 2-3% on debit card fees, as well as the scope for innovating digital reward schemes.

Including Lugano’s 50 or so banks in that list might seem odd. It stands to reason, after all, that delivering on the promises of Plan B would reduce demand for traditional financial services in favor of more novel, crypto-oriented fintech solutions.

But this is Switzerland – a country where blockchain technology and banking already go hand-in-hand.

“We have been and we will continue to be helpful to the banks here,” Ardoino insists. “There are already [individual corporate balance sheet] funds of $50 million, $100 million that are being moved here, and they need a local custodian.

“It’s not about leaving the banks behind. We want everyone to be happy about what we’re doing, so there is work for everyone and there are benefits for everyone. That’s the beauty of Plan B: it’s not like, ‘Fuck you to the banks’; it’s like, ‘Let’s work together with the community, let’s create an ecosystem that works for everyone’ … You will still use the banking layer.”

In October, Lugano will host the inaugural Bitcoin World Forum, a conference bringing together leaders in the cryptocurrency industry – and, no doubt, showing off what’s been achieved so far under Plan B. The city is confident that most of the 300 retailers already accepting LVGA will be bitcoin-enabled by the time delegates fly in. By the end of 2023, the aim is to have 1,000 shops on-board. By the end of 2025, when Lugano’s four-year contract with Tether is up for renewal, Ardoino hopes that all merchants in the city could be bitcoiners.

“We will help them throughout their journey,” Foletti adds with a smile. He knows that success will have consequences far beyond Lugano, Switzerland and Europe.