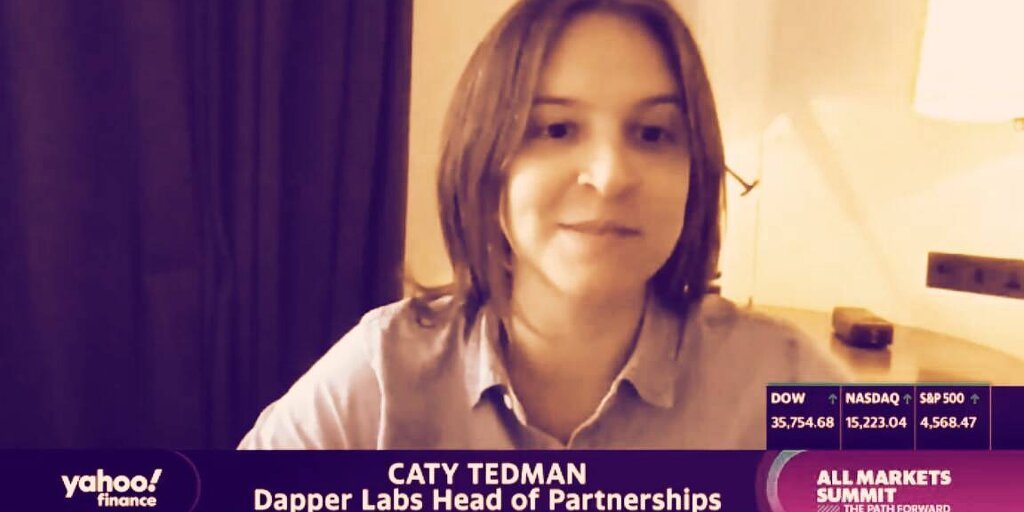 Dapper Labs’ Caty Tedman spoke about the success of NBA Top Shot and sports NFTs at today’s Yahoo Finance event. She now gets “very little resistance” from sports leagues about the viability of NFT collectibles.

It’s been just one year since Dapper Labs launched NBA Top Shot, the online collectibles marketplace that arguably kicked off the first mainstream NFT boom. At that time, the term NFT (non-fungible token) was relatively unknown outside of crypto circles. CryptoKitties, the collectible cats so popular in 2017 that they clogged up the Ethereum blockchain, were also NFTs (and also a Dapper creation), but that acronym wasn’t being widely used yet.

In one year, everything has changed.

Dapper recently announced new deals to build NFT platforms for the NFL and LaLiga. And Dapper’s head of partnerships Caty Tedman said at the Yahoo Finance All Markets Summit on Monday that when Dapper approaches pro sports leagues these days, “The conversation has shifted dramatically, where I think there’s a little bit of an understanding that there’s something here. I meet very little resistance these days that NFTs are a thing.”

Last month, Tedman told Decrypt that Dapper began conversations with LaLiga back in 2019, well before NBA Top Shot launched and became a household name, and that the firm had to help the league become comfortable with the idea of NFTs. In contrast, she said the deal with the NFL “came together really quick” amidst the booming current NFT market. There’s little need to explain the appeal of NFTs to leagues at this point.

It’s not just Dapper, of course, and it’s not just sports leagues: Visa bought a CryptoPunk NFT in August for $165,000, and Budweiser purchased a Bud-themed rocket NFT for $26,000. The largest U.S. cryptocurrency exchanges, Coinbase and FTX, are both launching NFT marketplaces. Art NFT projects like Art Blocks have exploded in popularity and price trends.

But the sports world has particularly embraced NFTs.

“We were lucky to start with the NBA,” Tedman said. “At that time, it was a lot of explanation and we spent a lot of time with lawyers and people in finance to talk about what does it look like to have secondary revenue, you don’t have secondary revenue on merchandise… what does it look like to have ownership in perpetuity of assets for consumers… NBA Top Shot has proven that there’s something there.”

Top Shot’s trading activity has declined from the peaks of February and March, each of which saw more than $200 million worth of sales volume, per data from CryptoSlam. However, October ($32 million) has already surpassed September’s trading volume tally ($20 million) as the new NBA season kicks up and Dapper launches packs of classic moments. Overall, NBA Top Shot has registered 1.2 million people on the platform and seen 14 million transactions to date—in just its first year.

Next, Dapper will set its sights on the NFL, and promises it won’t just “rinse and repeat” its Top Shot formula for America’s largest sports league.