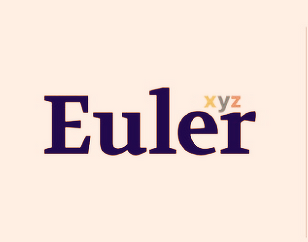 Euler will offer a lending market to any Ethereum-based token Unlike Aave or Compound, Euler is permission-less Its founders see an opportunity to serve the “long tail” of the crypto markets

If you own a popular cryptocurrency like Ethereum and want to lend it out for interest, you can go to Compound or Aave—well-established platforms that match borrowers and lenders. But if you own a newer or more obscure cryptocurrency, you’re out of luck since those sites don’t support such tokens.

That’s what gave rise to Euler, a new startup that bills itself as the “first lending protocol that allows users to create their own lending markets in a permissionless fashion.” This means that holders of any sort of Ethereum-based token can turn to Euler as a lender or a borrower.

Launched last December after an early version of the project won a university hackathon, Euler announced on Wednesday it has raised an $8 million Series A round led by crypto venture fund Paradigm. According to co-founder Michael Bentley, the protocol will be live by the end of the year. (Euler is pronounced “oiler” after an 18th-century Swiss mathematician and is not related to the music-focused crypto project known as Euler Beats).

“The long tail of the lending market is totally underserved in DeFi [decentralized finance] right now. There’s are lots of people out there with tokens they can’t collateralize,” said Bentley in an interview with Decrypt.

DeFi refers to a growing niche within the crypto industry that seeks to replace some of the more complex financial services found at traditional banks and brokers. As mentioned above, this could be lending and borrowing, but also options trading and so-called “stock tokens.” The key difference between DeFi projects and your typical bank, however, is that there is no central entity—it’s just lines of code and a team of developers.

An Oxford-educated evolutionary biologist before he turned to crypto, Bentley says his former career partially inspired the project. He explains that, while evolution is premised on selfish imperatives, many species nonetheless evolve to cooperate—a dynamic he sees at play in the crypto markets.

One obvious question for Euler is whether it’s a good idea to provide a lending platform to the most selfish individuals in crypto—namely, the myriad scammers and peddlers of worthless altcoins. While Compound and Aave may impose constraints on which tokens can use their platforms, those constraints serve a useful function in screening out scammy projects.

Bentley says Euler will not bar any token from using the platform, but it will deploy a tier system that means risky or suspect cryptocurrencies can only be financed in isolation. This means that, if a token implodes for whatever reason, its collapse won’t imperil the rest of the capital locked up on the platform.

This process of ring-fencing certain tokens will be carried out by Euler’s to-be-launched native token, which will provide a governance function in the same way that those issued by Compound and Aave do.

As for determining the interest rates available to borrowers and lenders, Bentley says Euler will draw on data from Uniswap—a popular intra-cryptocurrency trading forum—as a so-called oracle.

In the longer term, Euler plans to govern itself via a decentralized autonomous organization or “DAO,” an increasingly popular form of governance for crypto projects.

In the broader picture, if Euler succeeds, the platform could serve to provide new layers of liquidity to the broader crypto markets and free up new capital for investing. For users, it will offer an opportunity for lenders to earn high rates of interest in exchange for taking a risk on lesser-known cryptocurrencies. Meanwhile, it will allow employees and others at many new crypto projects—whose compensation often consists primarily of tokens—to lend out their assets or even take short positions against them.

“The Euler team is creating something that meets that need in a novel, scalable way, and we’re excited to support the development,” said Paradigm investment partner Charlie Noyes.

Other investors in the project include Lemniscap, which led Euler’s seed round as well as Anthony Sassano from The Daily Gwei, Ryan Sean Adams and David Hoffman from Bankless, Kain Warwick from Synthetix, and Hasu from Uncommon Core.