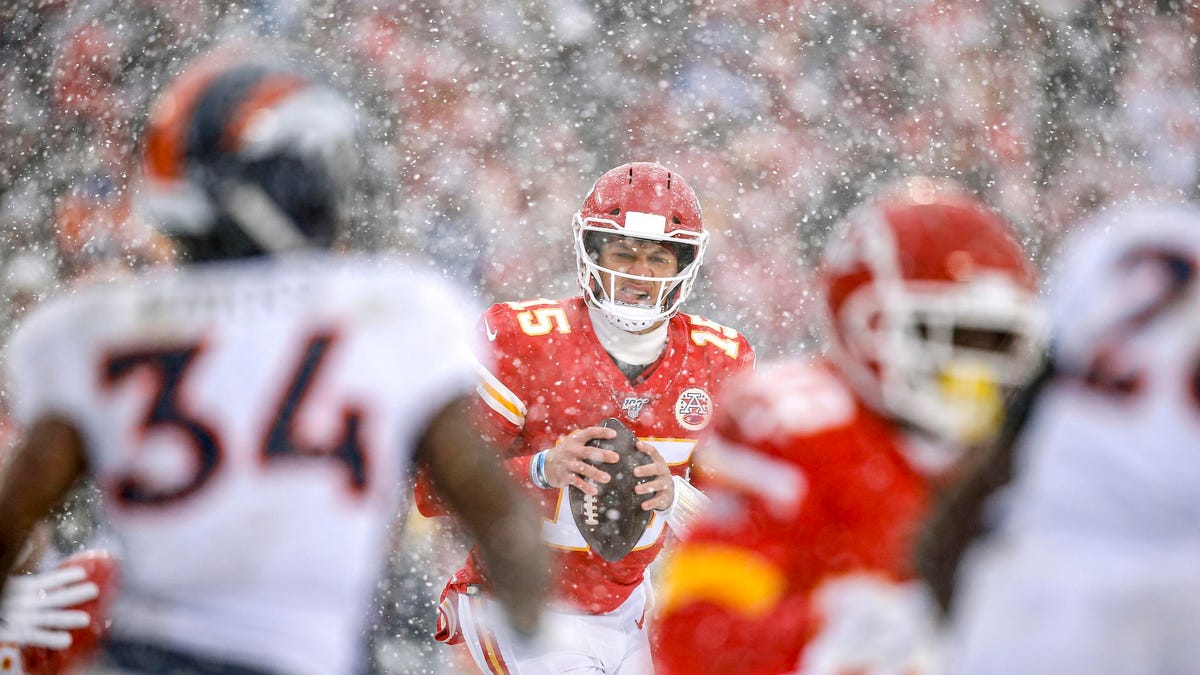 A gamified version of Patrick Mahomes could soon be available on the blockchain through DraftKings’ … [+] deal with the NFL Players’ Association.

On Tuesday the $12 billion Boston-based sports betting company DraftKings announced a partnership with the NFL Players’ Association. The licensing deal grants DraftKings the rights to the intellectual property (IP) of all 2000+ NFL players active today, with the opportunity to gamify digital player cards in a new blockchain product. Put simply, this arrangement could lay the groundwork for a fantasy football league where users can buy, trade and play NFTs of global stars like Tampa Bay’s Tom Brady, as soon as next season.

“We have seen what has happened in the blockchain and crypto space in the past nine to twelve months, and how quickly it’s moving,” Beth Beiriger, DraftKings’ senior vice president of marketplace operations, told Forbes. “We’re a tech company. This partnership with the NFLPA will allow us to bring incredible IP into this new emerging technology.”

On December 7, 2021, DraftKings and the NFL Players’ Association announced an IP deal to bring … [+] current NFL players’ likeness onto the blockchain.

Still, in a discussion with Forbes, Sean Sansiveri, general counsel and head of business at the NFL Players’ Association, avoided being pinned down to a timeline for when DraftKings’ new products or games may be launched in the blockchain arena.

However, the IP deal between the firm and the NFL PA could bring current NFL players’ image and likeness to a blockchain-based fantasy sports product as early as next year, the 2022-23 NFL season.

The company is building on the foundation of early returns made from DraftKings Marketplace, an online shop for sports NFTs (non-fungible tokens), launched in August 2021. Working with Polygon Studios, a gaming and NFT software developer that builds layer 2 products on top of the Ethereum blockchain, DraftKings launched the museum-like marketplace where users can buy digital sports memorabilia assets, such as exclusive video content of Simone Biles, the world class Olympic gymnast.

Simone Biles, pictured here at the 2016 Olympic Games, has partnered up with DraftKings on its NFT … [+] Marketplace.

Existing DraftKings users can use their existing DraftKings wallet to buy NFTs in fiat currency on the mobile app or on the Desktop version. With this new partnership, DraftKings hopes to further its growing consumer base, which its 2020 earnings report reported to be 1.1 million monthly unique paying users, almost 300% more than the 295,000 it had in 2019. Monthly revenue per user also grew 27% to $80 in the same time frame.

Despite this growth DraftKings will still need to succeed in a tightening industry with a clear market leader.  Allowing fans to pay for NFTs in US dollars is a mode of mass adaptation first employed by Dapper Labs, the company behind NBA Topshots, a digital-native product of on-chain video moments of real basketball scenes. On NBA Topshots, users unpack virtual packets of video moments from NBA games, like a  James Harden assist for Kevin Durant, or a Lebron James dunk for the Lakers.

By the end of Q2 of 2021, NBA Topshots had 800,000 registered users and monthly sales of $232 million, a Dapper Labs representative told Insider.  The firm also recently announced a deal with Spain’s La Liga to bring similar video moment NFTs to fans of the European soccer league.

According to Beringer other competitors include OpenSea, the world’s largest NFT marketplace, home to famous collections like CryptoPunks or the Bored Ape Yacht Club. She added that blockchain start-ups like Axie Infinity, Sorare and ZED Run are also early adapters of fantasy sports and NFT collectibles with sports game utility.

Another rival who could make a blockchain fantasy sports play in 2022 is Fanatics, the sports merchandise company. Rapper-turned-investor Jay-Z, the MLB and SoftBank were all investors in Fanatics’ August 2021 funding round, which valued Fanatics at $18 billion. When Major League Baseball’s existing IP deal for player cards and collectibles expires with Panini and Topps in 2022, Fanatics will have exclusive rights to the image and likeness of MLB players.

Finally, traditional gaming giants and betting companies are eager to compete. In an early November earnings call, ﻿EA﻿’ CEO Andrew Wilson, whose company has video game licensing deals with the world soccer association FIFA, the NFL, NBA, NHL and Formula One, called the crypto gaming space “the future of our industry.” Wilson highlighted the potential for NFTs that can be purchased or earned within games.