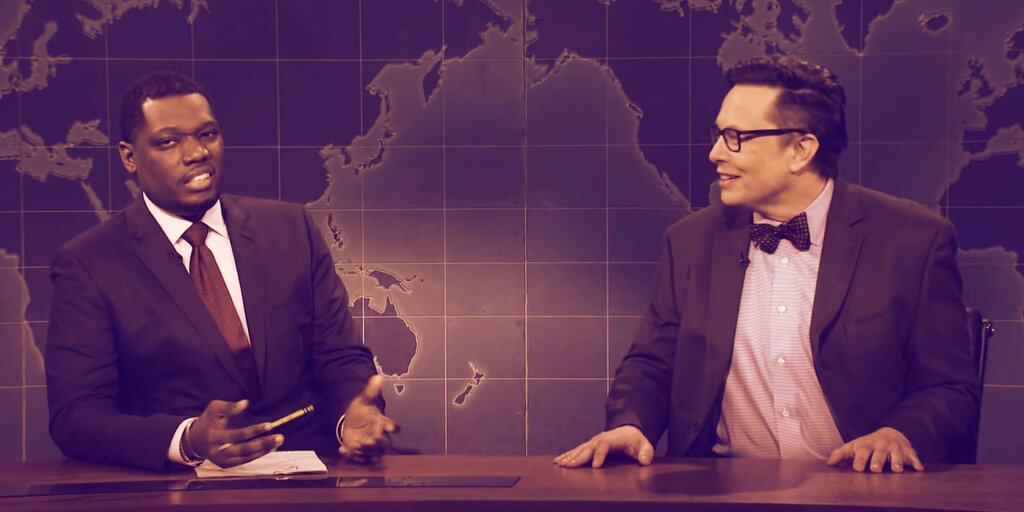 What a weird week it was in cryptoland. But then again, isn’t every week?

Last Saturday, Elon Musk gave us a textbook example of “buy the rumor, sell the news.” He helped send Dogecoin, his favorite meme token to pump on Twitter, on a rocket ride in the days leading up to his “Saturday Night Live” hosting debut—until the ride abruptly ended minutes before SNL started. By the time Musk’s mother Maye Musk name-dropped DOGE in the opening monologue, the coin was sinking fast—it fell from 62 cents to below 50 cents over the course of the next hour. Later in the show, Musk, playing the character of financial expert “Lloyd Ostertag,” admitted to Michael Che that Dogecoin is a “hustle”—not a great look, even in a comedy sketch.

As the week began, Musk was the biggest story in crypto, as critics once again asked: Were his DOGE-pumping tweets irresponsible? What does Musk owe to all the Tesla worshipers who bought Dogecoin because of his tweets? (The tweets are not illegal, though they are arguably unethical; in late February, in response to reports that the SEC was investigating his Dogecoin tweets, Musk said, “I hope they do! It would be awesome.”)

On Wednesday evening, the narrative changed again when Musk tweeted a bombshell: Tesla, just three months after buying $1.5 billion worth of Bitcoin, will ditch the cryptocurrency due to environmental concerns.

Huh? As Wedbush analyst Dan Ives wrote, “The nature of Bitcoin mining has not changed in the last three months.” Ives called Musk’s Bitcoin reversal “surprising and confusing.” Decrypt’s Scott Chipolina wrote that Musk “has dealt a potentially fatal blow to his image as one of Bitcoin’s biggest advocates.” Musk’s tweet sent Bitcoin down 15%, and other major coins took a hit as well.

As recently as April 22, Musk was singing a different tune. He tweeted “True” in response to a Jack Dorsey tweet that argued Bitcoin “incentivizes renewable energy.” Something clearly changed—the most popular guess is that someone told Musk that Bitcoin’s environmental impact is damaging Tesla’s green image.

So in a week that brought news of a U.S. DOJ and IRS investigation into Binance, and an eye-popping U.S. inflation reading that raised questions about whether Bitcoin truly is a hedge against inflation, Musk’s tweets drowned it all out. Elon Musk was again the biggest story in crypto.

Would a tweet about Bitcoin’s environmental issues from MicroStrategy CEO Michael Saylor have caused the same level of panic? What about one from Square CEO Jack Dorsey? I don’t think so.

Musk is the top poster boy for crypto flag-waving in mainstream tech. Prices move on the whims of his tweets. When Musk and Tesla first bought in, it sent Bitcoin soaring; it’s no surprise that Musk and Tesla backing away would have the opposite effect.

Of course, one fickle tech billionaire can’t control the future viability of an 11-year-old, trillion-dollar global payments network. Bitcoin is bigger than Elon Musk. But is Dogecoin?

On Thursday, Musk claimed he is “Working with Doge devs to improve system transaction efficiency.” (It turns out there are indeed Dogecoin developers; Decrypt’s Adriana Hamacher found some who revealed Musk has been talking to them since 2019.) That tweet, along with the news that Coinbase will soon list DOGE, came as a gift to DOGE-holders, sending the coin up 30% in a matter of minutes.

Back in February, Musk cautioned during a Clubhouse chat that his tweets about Dogecoin are meant to be jokes. In March, I asked Mark Cuban his take on Musk’s Dogecoin tweets, and he said, “That’s just Elon, right? He likes to raise hell, and he’s got the platform to do it.” Bloomberg’s Matt Levine wrote on May 6, “Dogecoin is up because it’s funny.”

But the price impact of Musk’s tweets are no joke. And now he appears to be championing Dogecoin in place of Bitcoin. Don’t forget he is also CEO of SpaceX, which will launch a moon mission next year paid for in DOGE. And this week, he asked his Twitter followers whether Tesla should accept Dogecoin; imagine what that will do to the DOGE price.

The joke is not funny anymore to Bitcoin believers.

This is Roberts on Crypto, a weekend column from Decrypt Editor-in-Chief Daniel Roberts and Decrypt Executive Editor Jeff John Roberts. Sign up for the Decrypt email newsletter to receive it in your inbox in the future. And read last weekend’s column: Binance and Coinbase Say They Have No Headquarters—That’s True and Untrue.