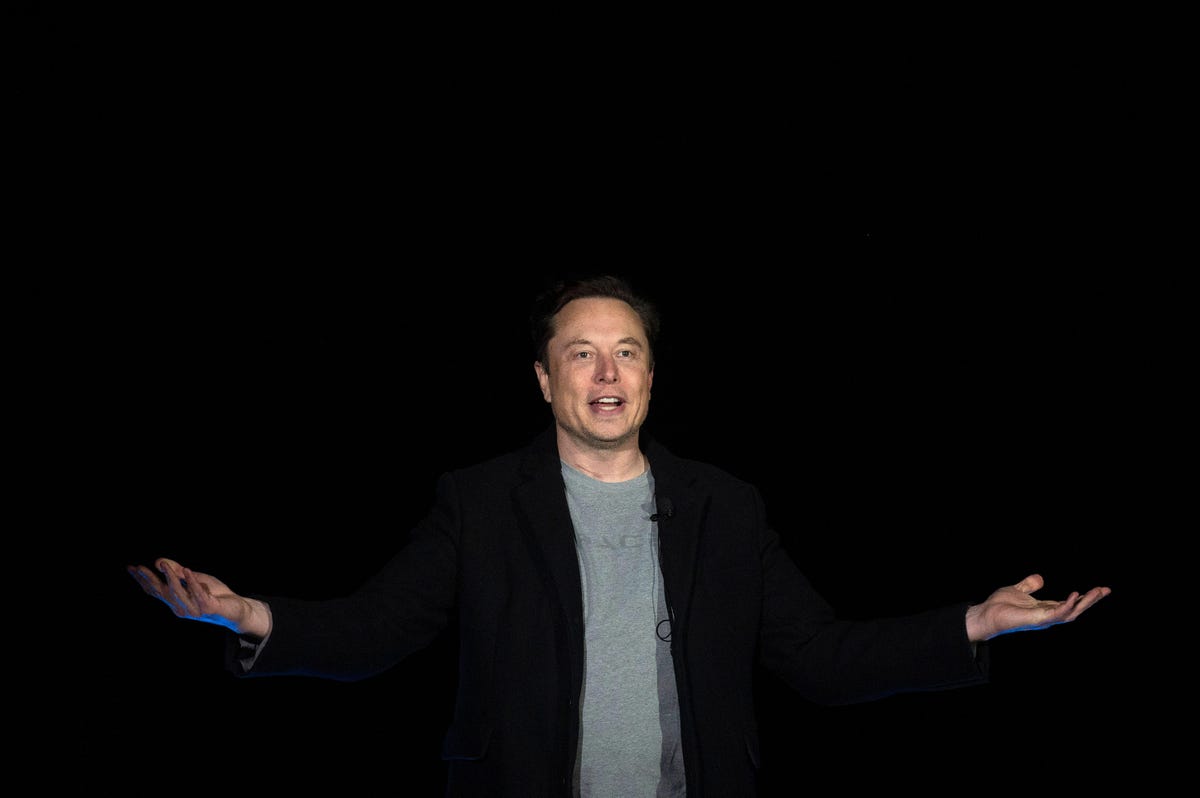 “Haha he says ‘bitcoin’ so many times,” Musk responded to a clip of the famed value investor on Twitter, shared by crypto-backing venture capitalist Marc Andreessen who called it “wild” that Buffett can attack bitcoin “while nakedly shilling diabetes”—referring to Buffett’s stake in Coca Cola.

Warren Buffett and his right-hand man, Berkshire Hathaway’s vice chairman Charlie Munger, both used the company’s annual shareholder meeting on Saturday to repeat their well-known derision of bitcoin and cryptocurrencies.

Elon Musk, the Tesla billionaire who added bitcoin to the company’s balance sheet last year, has … [+] clashed with fellow billionaire Warren Buffett over the cryptocurrency.

“Whether [the bitcoin price] goes up or down in the next year, or five or 10 years, I don’t know,” said Buffett, explaining his long dislike of bitcoin due to it not producing anything tangible—unlike businesses or property. The bitcoin price has struggled in recent months, falling around 40% from its all-time high of almost $70,000 per bitcoin.

“If you told me you own all of the bitcoin in the world and you offered it to me for $25 I wouldn’t take it because what would I do with it? I’d have to sell it back to you one way or another. It isn’t going to do anything.”

Meanwhile, Munger told Berkshire Hathaway’s shareholder meeting, sometimes call Woodstock for capitalists, “in my life, I try to avoid things that are stupid and evil and make me look bad … and bitcoin does all three.”

Both Buffett and Munger have previously railed against bitcoin, cryptocurrencies and the recent Robinhood-fueled stock market trading boom that they’ve likened to a casino.

The bitcoin and crypto community has responded to Buffett’s bitcoin criticism with hatred of its own. Last month, libertarian tech investor Peter Thiel called Buffett bitcoin’s “enemy number one” during a tirade against what he called a “finance gerontocracy” that was looking to lock cryptocurrencies out of the mainstream during a bitcoin conference in Miami last month. Thiel branded Buffett a “sociopathic grandpa from Omaha.”

Meanwhile, Musk has continued to signal his support for bitcoin challenger dogecoin, a tongue-in-cheek, meme-based cryptocurrency.

“Not a bad idea,” Musk responded on Twitter to dogecoin co-creator Billy Markus who in turn had voiced his support for a suggestion by celebrity investor Mark Cuban to use dogecoin to authenticate Twitter users.

The dogecoin price has rallied somewhat over the last month, climbing off recent lows thanks to Musk’s successful move to take Twitter private. Dogecoin traders are betting that Musk could intergrate dogecoin, his “favorite” cryptocurrency, into Twitter after he floated the idea of letting users pay for Twitter’s premium ser

The dogecoin price soared almost a year ago thanks to support from Elon Musk and other high-profile … [+] investors but has since crashed back, falling far further than the bitcoin price.