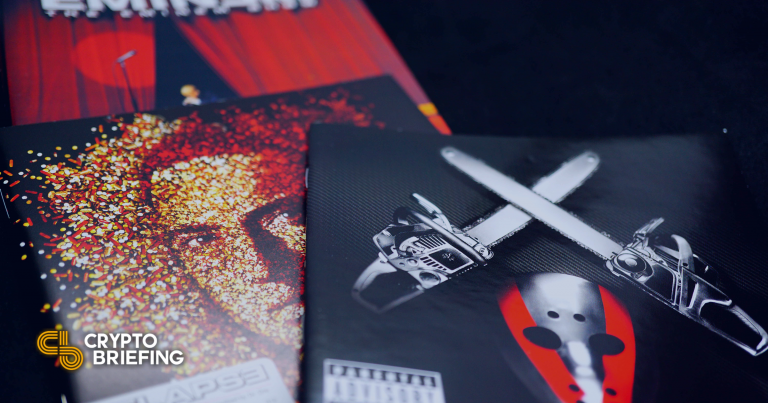 Eminem released his first set of NFTs through Nifty Gateway on Sunday. The collection raised just short of $1.8 million. The collection featured digital action figures, characters from iconic Eminem videos, Mathers’ original instrumental beats, and rare physical items. The NFT space has attracted many musicians this year, but Eminem is arguably the biggest star to participate in the movement to date.

Announcing the collection, he said:

“I’ve been collecting since I was a kid, everything from comic books to baseball cards to toys, as well as every rap album on cassette I could get my hands on. Not much has changed for me as an adult…I’ve attempted to re-create some of those collections from that time in my life, and I know I’m not alone.”

The drop featured digital action figures, as well as characters inspired by classic Eminem music videos. Mathers provided his own original instrumental beats on several pieces. The open editions were priced at $313, a relatively modest sum compared to other non-fungible tokens (NFTs) on the market.

The SHADY CON auction for the 1/1 🚨ends in just over an hour.🚨 Giveaways include the @Eminem Carhartt @Jumpman23 IV’s as well as original Infinite vinyl pressing (sealed) – portion goes to MMFoundation. https://t.co/FVBh2dfWxe pic.twitter.com/chAbw7qakN

The final sum puts Mathers in the same league as superstar artists like The Weeknd and Grimes, who have recently made upwards of $1 million from releasing NFTs on Ethereum.

NFTs have proven popular across many creative disciplines in recent months. While much of the mainstream attention has focused on the digital art world since Beeple’s historic Christie’s sale, 2021 has been a pivotal year for the music industry’s adoption of NFTs.

NFTs usually take the form of a digital asset, though they can also come in physical form. These assets can encompass music, visual art, tweets, digital fashion pieces, and anything else that can be tokenized. Because the data for each asset gets recorded on-chain, NFTs are provably scarce and unique to their owner.

Importantly, several editions of the same NFT can be minted; the unique aspect is the data that gets recorded on the blockchain. NFTs are typically found on Ethereum today, and they’re usually purchased using ETH.

Music streaming services like Spotify dominate the industry today, but they’re far less lucrative artists—the platform usually pays about half a cent per stream. With NFTs, artists can get paid for their work almost instantly without third parties taking a hefty cut.

Moreover, smart contracts can be programmed to pay the original owner for every subsequent sale of a piece. That could change the way secondhand record marketplaces like Discogs operate in the future. There’s also a possibility that NFTs will replace physical concert tickets in the future; there would be a benefit to tokenizing tickets as it could help eliminate the scalping market.

Despite all of the potentials of the technology, NFTs have been divisive among music fans. Many have suggested that the environmental impact of Proof-of-Work blockchains makes it difficult to justify minting NFTs.

However, Ethereum will soon move to a more energy-efficient Proof-of-Stake consensus algorithm, while efficient solutions from projects like Palm and Polygon have emerged in recent weeks. Minting NFTs on Proof-of-Stake sidechains such as Polygon is one way to make them more sustainable while maintaining a place within Ethereum’s rich ecosystem.

With major artists like Eminem now experimenting in NFTs, sustainable solutions are becoming more vital than ever as the space receives more attention. Active since the late 80s, Eminem is one of the most successful rap artists of all time. He’s sold 220 million records worldwide.

Disclosure: At the time of writing, the author of this feature owned ETH and several other cryptocurrencies.

The Weeknd Raises Over $2 Million in First NFT Auction

Abel Tesfaye just made around $2.29 million from his collaboration with Nifty Gateway.  The Weeknd Gets Tokenized  Abel Tesfaye, the platinum-selling R&B artist better known as The Weeknd, just made…

Playboy announced the partnership along with multiple artist collaborations and curations earlier today. Playboy Bunnies on the Blockchain Nifty Gateway is an NFT platform owned by the Gemini exchange, focusing…

What Are Non-Fungible Tokens (NFTs)?

Tokenization is well-suited for commodities like fiat currencies, gold, and physical land. A fungible asset’s representation on blockchain makes commodities tradable 24/7 via borderless and frictionless transactions. Fungible goods are…

After Beeple, CryptoPunks Are Coming to Christie’s

After selling Beeple’s “Everydays: The First 5,000 Days” for $69 million, popular auction house, Christie’s will now sell nine rare CryptoPunks in May. Christie’s Continues NFT Mania One of the…