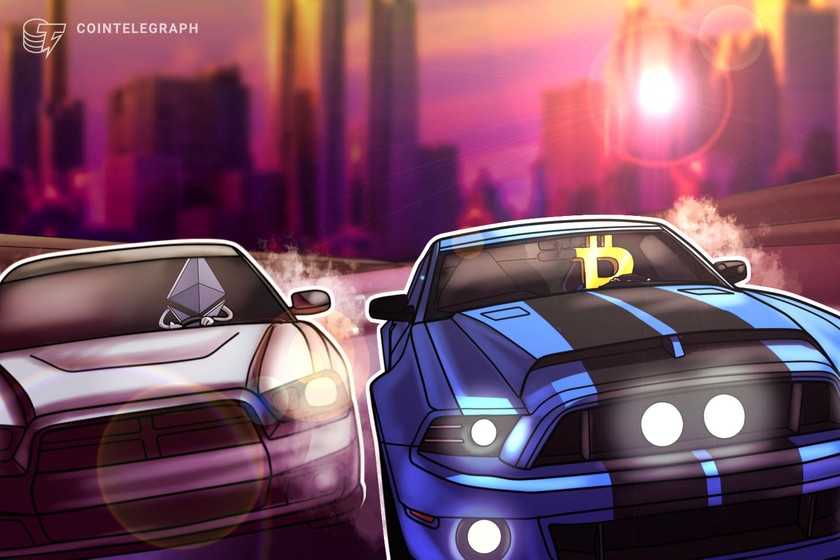 The Ethereum network eclipsed Bitcoin in terms of total transaction volume last year, though the king of crypto has managed to retain its crown when it comes to online search interest.

According to data from Nasdaq and Ycharts shared on Reddit on Jan. 2, Ethereum had 338% more total transaction volume in 2022 (408.5 million) than the Bitcoin network (93.1 million).

The values shown in the chart are in millions of transactions with the average daily transactions at around 1.1 million for ETH and 255,000 for BTC.

However, transaction volumes on the Bitcoin network were steadier and more periodic than Ethereum, which experienced much more volatility in transaction volumes. This was due to spikes in demand at certain times such as NFT launches and other gas-guzzling events such as XEN minting.

Ethereum’s heftier transaction volumes have continued into the new year, with the Ethereum transaction count on Jan. 2 reaching 924,614, a 300% increase compared to Bitcoin’s 229,191 on the same day, according to Bitinfocharts.

The analyst who posted the metrics said he was “skeptical about people saying that a flippening could happen someday,” adding that those advocating for it have reason to do so now.

A flippening occurs when one chain surpasses a higher-ranked one for the same metric, in this case, transactions and activity.

The charts also do not include layer 2 transactions which would put Ethereum even further ahead of Bitcoin for this metric. According to L2beat, the number of L2 transactions per second (TPS) actually surpassed those on layer 1 Ethereum in mid-October and has remained above it ever since.

Related: Why the battle for low or no transaction fees really matters

However, while Ethereum may be ahead in transaction and activity terms, Bitcoin remains the most searched cryptocurrency online.

On Jan. 1, a newsletter from “In Bitcoin We Trust” revealed that BTC attracted the most attention on the  Google search engine in 2022, with 28.4 million monthly Google searches across the world.

The report concurred with Cointelegraph which revealed that Ethereum did not make second or even third place for search popularity. These spots were occupied by meme coins Shiba Inu (SHIB) and Dogecoin (DOGE) respectively.

Ethereum, in fourth place, had 3.8 million global monthly searches according to the data.