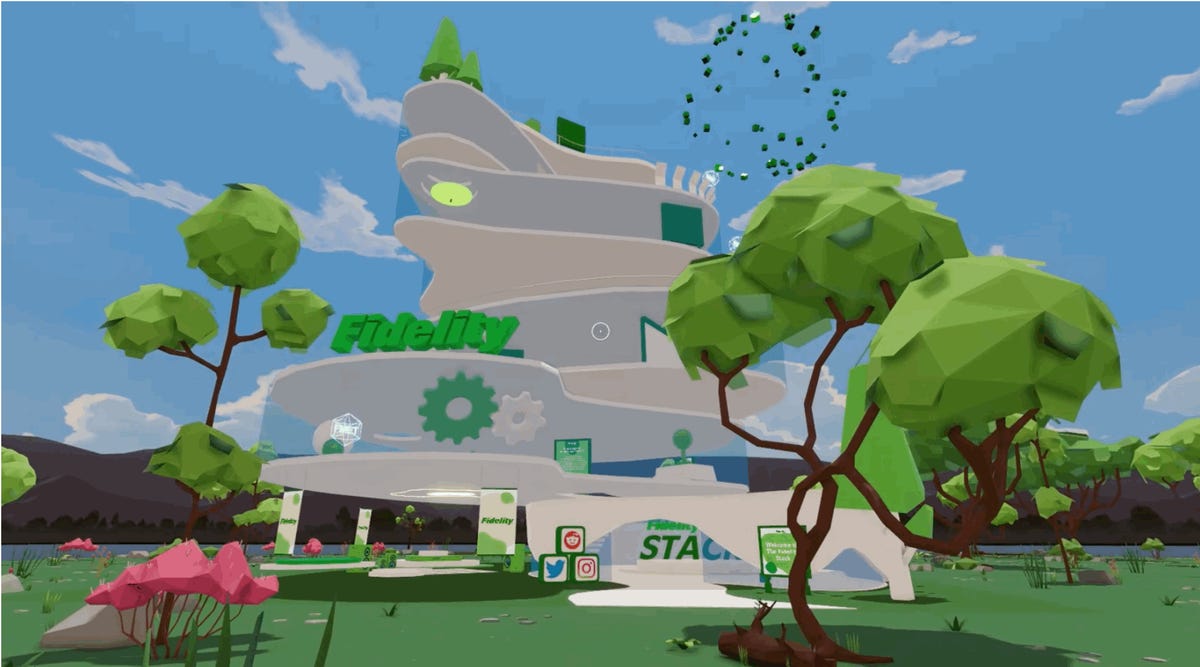 The Fidelity Stack in Decentraland

Fidelity Investments launched a metaverse presence called the Fidelity Stack which includes a dance floor, rooftop sky garden, and a game called the Invest Quest that:

“Provides a gamified financial education experience in Decentraland. Users are challenged to traverse the building learning the basics of ETF investing while gathering ‘orbs’ along the way.”

According to the brokerage’s head of emerging customers:

“The next generation seeks out financial education in all the places they spend time, whether physical or virtual. We’re committed to serve customers in these decentralized communities as they transform and grow.”

Fidelity also announced the launch of the Fidelity Metaverse ETF, an exchange-traded fund that provides access to companies that develop, manufacture, distribute, or sell products or services that establish or enable the metaverse.

The Fidelity Stack: A Wasted Effort

It’s hard to believe that Fidelity really thinks that “the next generation seeks out financial education in all the places they spend time, whether physical or virtual.” Young consumers have never taken to online “gamified” educational experiences. The industry has seen efforts like:

Mo’Doh Island. A “financial education virtual world,” the game has garnered 136 views on YouTube since December 2012. It’s Facebook presence has 24 followers and 19 likes. MoneyIsland. Developed by BancVue (now Kasasa) in 2011, this online financial education experience is nowhere to be found on its website today. Stagecoach Island. Built by Wells Fargo in 2005, a search for “stagecoach island” on Wells Fargo’s website produces a link that just takes you back to the bank’s home page.

So why would young consumers go to the metaverse to play these games? Especially when they could be doing things they enjoy doing in the metaverse.

I asked my Twitter and LinkedIn contacts—who are predominantly from the financial services industry—if, in their experience, they’ve seen young consumers take part in digital educational experiences.

The response was overwhelmingly negative with 93% of 602 poll respondents saying that young consumers don’t participate in these games. One of the more definitive answers came from Erich Reid, a Sales Engagement Manager at Google, who had the following text conversation with one of his kids:

The Key to a Successful Gamified Education Experience

Wandering around the Fidelity Stack, I managed to collect four “orbs” simply by accidentally bumping into educational placards. Is that how learning happens?

According to John Waupsh, founder of a neobank for musicians called Nerve, and former Chief Innovation Officer at Kasasa:

“The special part about MoneyIsland wasn’t that it was just a fun game—it was that it included over 100 pages of financial education quizzes, etc., for teachers. The missing element in financial education is that there is no information for teachers to actually work from. Kasasa clients would sponsor MoneyIsland in school classrooms, so not only could kids learn to spend, save, and share but teachers had a curriculum.”

Fidelity’s metaverse learning center feels like it was created by out-of-touch business execs trying to do something cool and hip—but failing miserably at it.

Fidelity Joins JPMorgan in the Metaverse Hall of Shame

JPMorgan, which claimed to be the first financial institution in the metaverse, launched an equally embarrassing metaverse presence in February. The two-floor structure contains a tiger that walks around the office and lets visitors view videos from a 2021 fintech conference. And there was nothing on the second floor.

Both JPMorgan and Fidelity are making a mockery of the metaverse with simplistic and useless entries into the emerging space.

I’ll change my tune if Fidelity uses its dance floor for metaverse concerts and events with big name performers. A lot more people will go to Fidelity’s metaverse space for a concert than will ever go for ETF education.

Both companies’ actions beg the question: Why did they really launch a metaverse presence now? Answer: To call attention to something else they did.

In JPMorgan’s case, it was to call attention to a report it published on the financial opportunities in the metaverse.

For Fidelity, it was to publicize its Metaverse ETF, which will include stocks that generate at least 50% of their revenues from computing hardware and components, digital infrastructure, design and engineering software, gaming technology, web development, and smartphone and wearable technology.

Fidelity’s new ETF could help spur the creation of similar funds, and JPMorgan’s report on metaverse opportunities is an important—and spot-on—analysis of the metaverse’s potential. According to the report:

“Supply and demand dynamics are driving people into the meta-economy. Over time, the market for metaverse real estate could evolve in a similar way as the real estate market in the analog world. In time, the virtual real estate market could see services much like in the physical world, including credit, mortgages, and rental agreements.”

Why both companies felt they had to create embarrassing metaverse presences to promote their real objectives is a shame.

The metaverse deserves better than this.