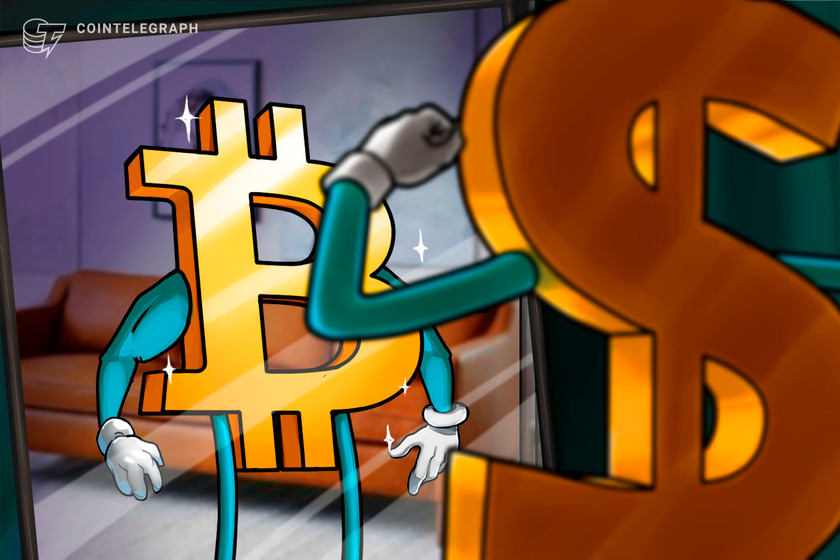 Bitcoin (BTC) prices fell by almost 5% on June 4, continuing the decline into the Friday session as investors grappled with Elon Musk’s cryptic tweets on the cryptocurrency, raising speculation that the Tesla CEO might dump the firm’s remaining 43,2000 BTC stash.

Nonetheless, Bitcoin’s move downside also coincided with a big spike in the U.S. dollar index (DXY), raising speculation that more than one factor accelerated the cryptocurrency’s dramatic plunge during the late Thursday and early Friday session.

In retrospect, the U.S. dollar index, which measures the greenback’s strength against a basket of top foreign currencies, surged 0.18% to reach a three-week high of 90.627 after Musk’s tweet. Meanwhile, the same period witnessed Bitcoin prices crashing by 9.31% to hit an intraday low of $35,593.

The chart below illustrates Bitcoin’s immediate response to Musk’s tweet — a big red candle on hourly charts followed by extended declines. However, while not reacting exclusively to Musk’s anti-Bitcoin tweet, the dollar also starts rising on sustained upside bids in traditional markets, eventually logging its biggest daily gains since September 2020.

Bitcoin’s drop after Musk’s tweet also coincided with a rebound in the US dollar index market. Source: TradingView

The event prompted the Federal Reserve to unleash unprecedented supportive measures, including near-zero interest rates and unlimited bond-buying programs, to safeguard the U.S. economy from the pandemic’s aftermath.

The expansionary policies upped the U.S. public debt burden from $24.97 trillion in April 2020 to $28.174 trillion in April 2021. As a result, the dollar’s strength against major currencies has plumbed by more than 12.5% since March 2020. Meanwhile, Bitcoin’s performance in the same period sits at the north of 855%.

This Graph Shows The Development Of A 1000 USD Investment In #Bitcoin and traditional investments such as #Stocks, #Gold or #Dollar.

Bitcoin Despite Of The High Volatility Heavily Outperformed All Of Them In The Recent 10 Years. pic.twitter.com/TIae6U7PTo

The overnight Thursday decline in the Bitcoin market confirmed a brief negative correlation with the U.S. dollar on short timeframes.

However, on the weekly chart, the two assets continue to trend inversely to one another, reminding that Musk, with his $1.3 billion BTC exposure in a $690 billion market, remains irrelevant against much more pressing macroeconomic concerns, including inflation.

Elon Musk is a phase

Tesla continues to struggle to generate earnings from its electric vehicles’ sales, showing the company’s first-quarter filings. Of the $594 million it reported, only less than $100 million came from its actual business — the rest, on the other hand, came through the sale of its profitable BTC holdings (~272 million) and regulatory credits.

In short, Musk’s Bitcoin game is similar to that of a retail trader.

The billionaire entrepreneur has so far treated cryptocurrency as a tool to offset his company’s underperformance.

That is further evident with his flip-flop moves on accepting BTC as payments, followed by tweets that he might have Tesla dump its entire Bitcoin holdings, further leading to his breakup meme — that incidentally arrives on the same day when global media reported a 50% decline in the sales of Tesla cars in China over quality issues.

Tesla’s China orders halved in May – The Information https://t.co/byiMlnKqWk pic.twitter.com/uSYoh9n5ei

But Musk’s influence on the Bitcoin market is reducing with each of his anti-crypto tweets, proves the scale of the cryptocurrency declines. For example, his mid-May Twitter spat with crypto influencers crashed the BTC/USD exchange rate from as high as $58,000 to as low as $30,000 — a circa 42% decline. But even then, the pair pared almost 30% of those losses later.

In comparison, the latest Elon Musk candle ended up wiping only $3,500 off the Bitcoin valuation, logging a circa 9% intraday loss.

Attributing this dump to Elon is a denial that the break out had no volume and couldn’t break the 39,5k resistance. When he tweeted the price was already dropping after maybe 3 attempts to break

Hence, Bitcoin continues to trade upward long-term, driven higher by the same anti-dollar fundamentals that attracted companies like Tesla to it in the first place. More bullish cues for the cryptocurrency expects to come from President Joe Biden’s $6 trillion government spending package that would add further downside pressure on the U.S. dollar.

For now, the cryptocurrency remains in a technical limbo, waiting for a decisive move out of the current $32,000-$40,000 range. Musk is old news. Move on, Bitcoiners.