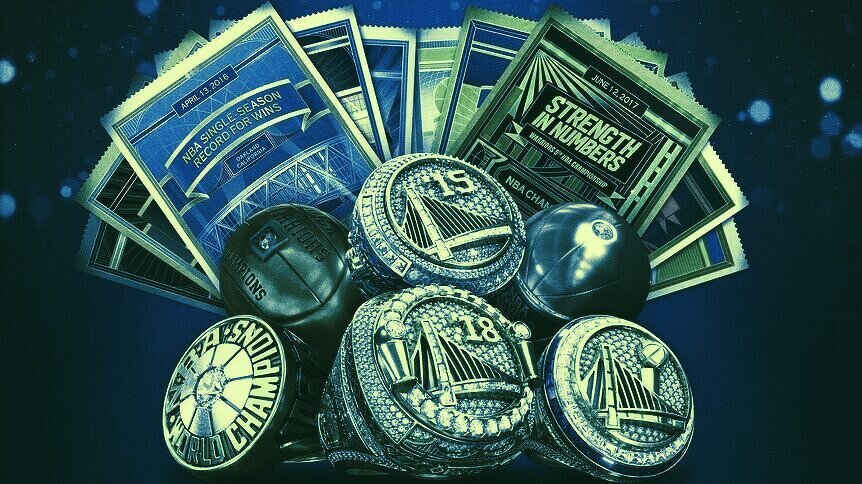 The Golden State Warriors are releasing official NFTs. The Warriors’ chief revenue officer said NFTs are a “mainstay” for fan engagement around the world.

The Golden State Warriors basketball team has announced the release of officially licensed NFTs, per an announcement made today.

The officially licensed digital collectibles commemorate the team’s six NBA championships, as well as some of the most iconic games in franchise history.

“The digital collectibles excitement is palpable,” said Warriors chief revenue officer Brandon Schneider in a prepared statement, adding “We see NFTs and digitization of our business as a mainstay to engage our fans around the world.”

The winning bidder of the 1-of-1 NFT will also receive a one-of-a-kind physical ring, due to be received on-court at a future Warriors home game.

Warriors Commemorative Ticket Stub NFTs are designed to bring to life some of the most memorable moments in franchise history, including the Warriors’ first-ever NBA Championship game in 1947, and the famous upset game against the Mavericks on May 3, 2007.

Both the Championship Ring NFTs and Ticket Stub NFTs will be partnered with live experience for successful bidders, including participation in a Warrior-for-a-Day experience, and a custom championship ring presentation during a game.

Where are the Warriors NFTs on sale?

The auction is currently live on NFT marketplace OpenSea. The main collection auction will end on Saturday, May 1, at 8pm PDT. However, 1-of-1 auctions end on Sunday May 2 and 8pm PDT.

Per the announcement, a portion of all proceeds from the auction will go to the Warriors Community Foundation—a charitable organisation that has granted over $22 million for educational initiatives in the Bay Area since 2012.

Prospective bidders will need a MetaMask wallet and an OpenSea account to participate.

Non-fungible tokens, or NFTs, are cryptographically-unique tokens that can be used to represent digital content such as artwork or music. In recent months, many sports personalities, teams and organizations have launched their own NFTs.

Beyond the well-known NBA Top Shot NFT marketplace, NBA prospect and Gonzaga star Jalen Suggs is auctioning off his now famous game winning shot against UCLA as an NFT. In baseball, NFTs commemorating the hall of fame career of Red Sox legend Ted Williams were auctioned on April 19.

In the NFL, where some players like Carolina Panther Russell Okung and Kansas City Chief Sean Culkin have already embraced the wider crypto industry, NFTs are booming too. Notably, Tampa Bay Buccaneer and Super Bowl champion Rob Gronkowski’s NFTs were released last month. His quarterback, Tom Brady, launched his own NFT platform earlier this month, alongside tech giants like Apple, DraftKings, and Spotify.