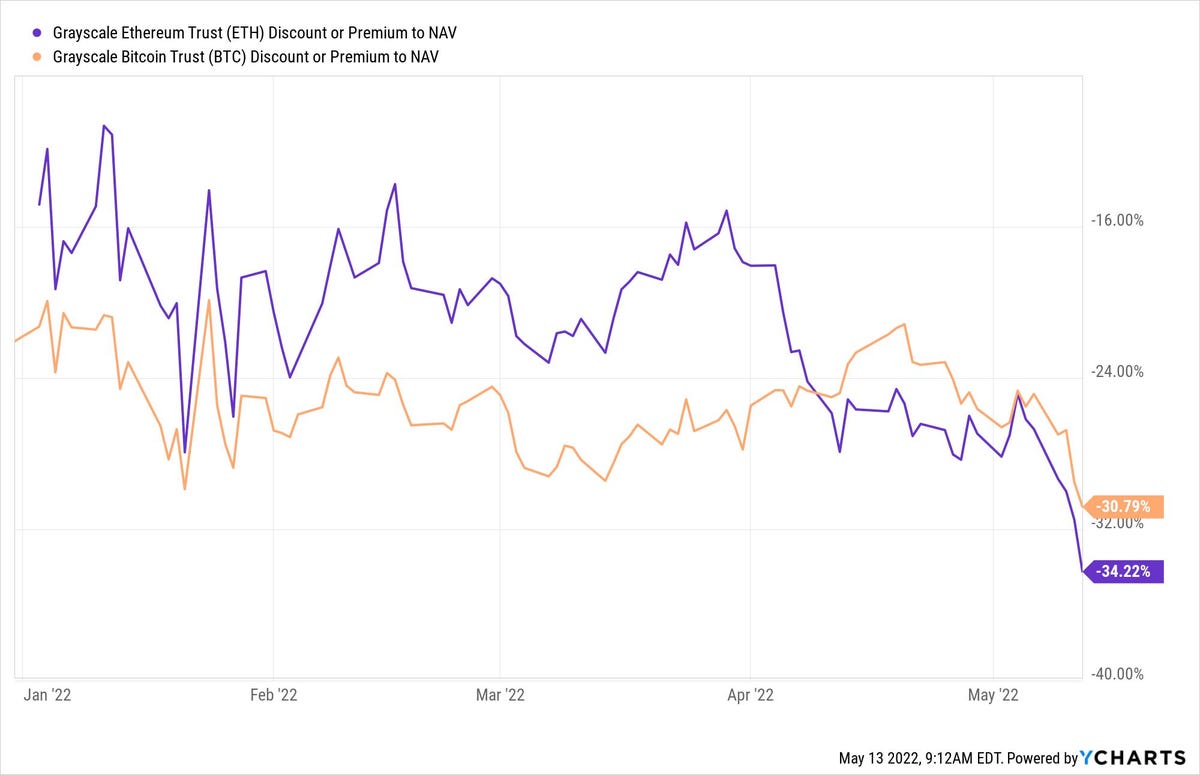 Discounts on the two largest cryptocurrency funds hit all-time lows as the digital assets market suffered one of its most volatile weeks.

Namely, shares of the Grayscale Bitcoin Trust (GBTC), the world’s biggest bitcoin fund with $18.3 billion in assets under management, have been trading at a 30.79% discount against the fund’s net asset value. As a private-placement trust that trades like a stock, GBTC allows investors to get exposure to bitcoin without actually having to buy the asset. The fund’s manager, New York-based Grayscale Investments, takes care of the custody in exchange for an annual management fee of 2%.

The company’s other product, the $6 billion Grayscale Ethereum Trust (ETHE), has also seen its discount widen to 34.22% this week. The offering carries a slightly higher fee tag of 2.5%.

While the heavy discounts could be seen as a bearish indicator of investor sentiment, they also offer opportunities to get exposure to cryptocurrencies at well below their market value. Last week, both funds became available on the commission-free trading app Robinhood.

Speaking to Forbes, CEO of Grayscale Investments Michael Sonnenshein commented, “I think that our investor base generally tends to take a longer-term time horizon for their investments in crypto. We generally find that they use pullback in prices opportunistically to either average down on their positions or perhaps start new positions. It’s certainly encouraging to see where we are today in terms of investor utilization of Grayscale products.”

Last week, Grayscale met with the Securities and Exchange Commission in an effort to persuade the regulators to approve the conversion of GBTC into a bitcoin ETF. The Commission has struck every such application to date, citing the lack of investor protection in the nascent market. To add pressure, Grayscale has launched a wide campaign in support of its application, including a public letter-writing push, which flooded the SEC with more than 3,000 letters. The firm has also hinted that it would sue the agency if its application was denied.

Even amid the ongoing market turmoil, Sonnenstein is confident: “The conversion of GBTC to an ETF remains a matter of when, not a matter of if,” he says.