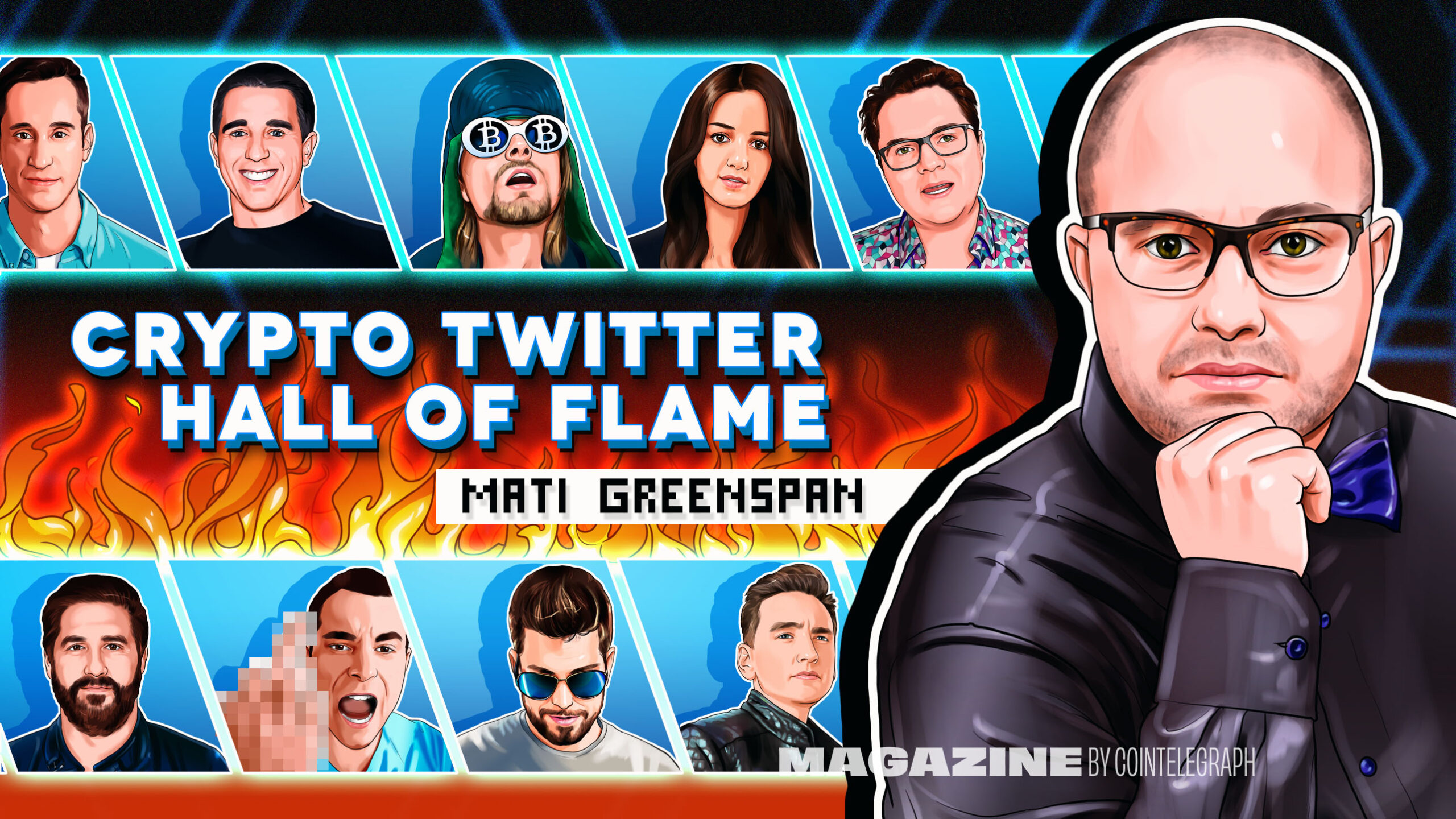 Name: Mati Greenspan
Anonymous: No
Twitter followers: 48,000
Known for: The “face” of eToro for years, Greenspan is a rare moderate voice on Crypto Twitter.

Who is this guy anyway?

The friendly but cynical Mati Greenspan became a well-known crypto market commentator in publications such as Forbes, Bloomberg and The Wall Street Journal as a senior market analyst for eToro until he set off on his own by founding research and advisory firm Quantum Economics in 2019. He’s been on Cointelegraph’s Top 100 Notable People in Blockchain for the last two years.

Unlike the talking croissants and anime whales on Twitter, Greenspan is personally accountable for his views, which may explain why he’s a lot less bolshie and provocative than some. With 48,000 followers, Greenspan doesn’t have the biggest account but does offer informed market insights and alpha.

His slightly obsessive attitude toward crypto stems from working as a market analyst in the 2000s and watching the “financial crisis from an insider perspective.”

He believes we “have the power to completely displace the traditional finance industry” in the next five to 10 years.

Greenspan joined Twitter in 2012, the same year he started as a market analyst at eToro. His former boss pushed everyone at the company to start up an account and offered them 1 BTC for their trouble.

Greenspan was one of the few to take up the free Bitcoin offer, and he credits this as the start of his journey down the crypto rabbit hole. His following grew through interviews with major media outlets, which sometimes embedded or quoted his tweets.

He set out to accumulate 10,000 followers, and it was only after high-profile figures such as Crypto Banter host Ran Neuner endorsed him on Twitter that his profile started to rise dramatically, and his followers jumped from 3,000 to 10,000.

Greenspan figured if it worked once, it would work again, and he recalls contacting “close friends and saying, ‘Hey, can you give me an endorsement?’”

Don’t expect “laser eyes til $100K” content from Greenspan. He describes his takes as “cynical and sarcastic” but says his skepticism has protected him from ever being “rugged” or “scammed” and isn’t afraid to call out bullshit when he sees it.

“If I put out information that I later find out is false information, I’ll always disclose it.”

Saifedean Ammous tweeted asking for one good reason why Bitcoin’s rigidity and reluctance to change weren’t totally awesome. Greenspan gave him several and got blocked.

But if you haven’t been blocked by Ammous, you’re not trying. We’re not even going to embed the tweet because no one would see it.

Greenspan replied to a tweet by Bitcoin Magazine’s Pete Rizzo about the Bitcoin 2021 conference by enthusing it was the “Biggest crypto conference ever!”

Rizzo corrected him saying “*Bitcoin*” and instructed him in the correct terminology: “It’s a Bitcoin conference, about Bitcoin. Bitcoin is subjective and hence why it is used as an adjective.”

In the replies, various acolytes said they were blocking Greenspan for having a “low IQ” or “being a scammer,” while one anon account threatened him, saying, “Watch your back bro.”

Greenspan issued a public service announcement that “anyone that has been holding LINK since the early days, now the price is at $19, you should take some profits.”

This started a firestorm of reaction from LINK’s frog army. “Not a single one of them knew a single thing about finance and trading,” he says, adding this type of crypto fan seems to want to hold the asset forever and never realize any profits.

Hex fans were upset that he called the project a scam and predicted founder Richard Heart Win would go to jail.

Greenspan spent days arguing with the Hexicans over the alleged inherent scamminess or otherwise of Hex amid frequent claims that Greenspan himself is a scammer who “shilled FTX,” which he says is a complete lie.

If nothing else, it shows that Greenspan is unlikely to have any skeletons in his closet, because exposing them is how @RichardHeartWin took down the now disgraced Australian influencer @AlexSaundersAU when he leveled similar charges against Hex.

You guys keep repeating that I shilled FTX.

Why do you feel the need to repeat this lie over and over?

It won’t make it true.

Greenspan takes a fairly dim view of most of Crypto Twitter and says it’s “disgusting” how many accounts are run by scam artists and manipulators.

But he’s now a big fan of Coffeezilla (334,000 Twitter followers) after watching his interview with Sam Bankman-Fried. Until he watched the interview, he said, “It was easy to give SBF ‘the benefit of the doubt’ or fall for his spin that it was all a ‘mistake.’” But Coffezilla’s interview showed a side to the SBF story that major publications, such as The New York Times, didn’t uncover.

Elon Musk is a joker and a pumper. A proper price manipulator. Why is anyone taking him seriously?

Greenspan thinks Twitter was headed in the wrong direction even before Elon Musk took over.

“It’s become too easy for bad actors to game the system. Personal information, influencing options or just controlling the conversation are all up for the highest bidder in Web2.”

However, he says he was recently able to use Twitter and his newsletter to raise double the amount of funding targeted for his Bitcoin mining facility in Texas, something he’s proud of during a bear market and without any venture capital funding.

This was achieved “within a few hours” by Greenspan tweeting to his followers on May 24: “If anyone has balls of steel and $50K to invest, I have a deal of a lifetime for you.”

Powers On… Top 5 crypto legal and regulatory developments of 2021

Ciaran Lyons is an Australian crypto journalist. He’s also a standup comedian and has been a radio and TV presenter on Triple J, SBS and The Project.