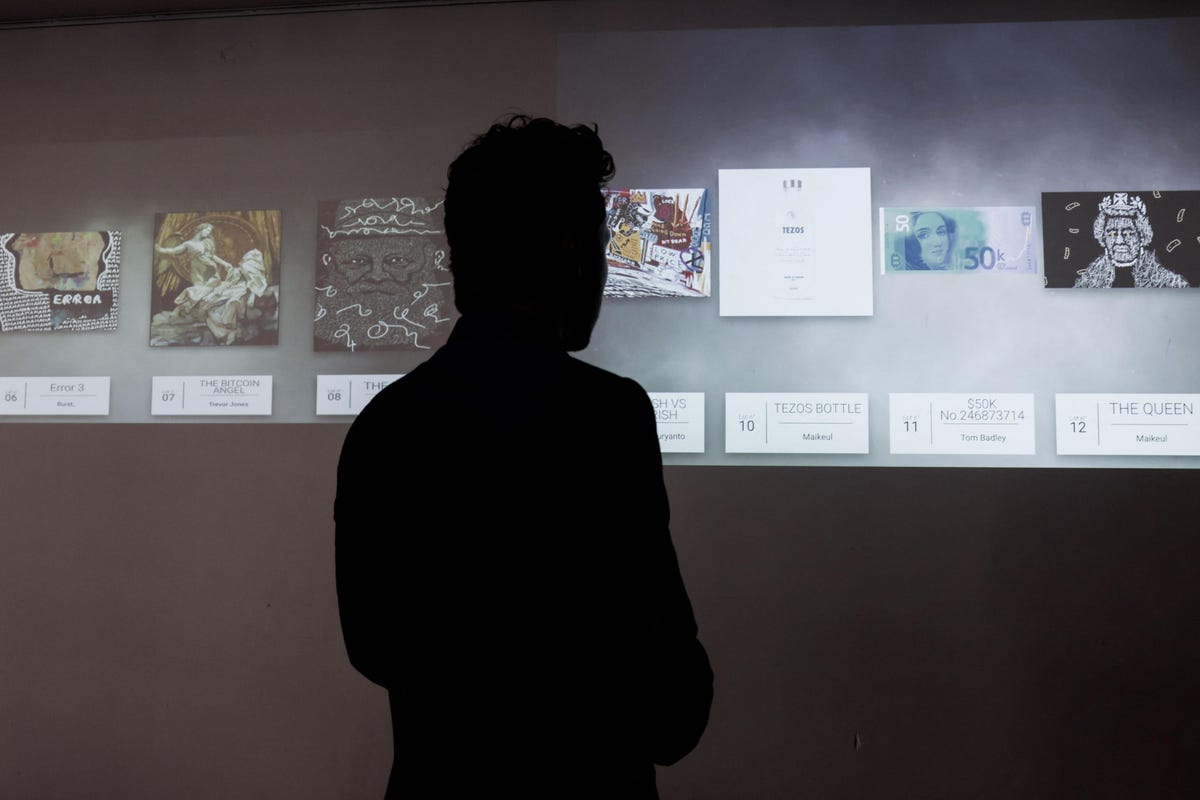 A visitor looks at an ‘NFT digital artwork’ which will be auctioned on May 20 at the Millon Belgique … [+] auction house, in Brussels on May 18, 2021. – After the memorable sale by Christie’s for $69 million in March of a collage of 5,000 digital images stamped by the American artist Beeple, the Europeans are getting into the NFT act, which is very speculative, as it is directly linked to the cryptocurrency market. (Photo by KENZO TRIBOUILLARD/AFP via Getty Images)

In a time when consumers are paying to skip advertisements, global brands are reimagining how they engage consumers by entering the metaverse. From social video sharing app TikTok to American beer company Anheuser Busch, companies across sectors are dipping their toes in the realm of NFTs.

“You don’t want to see a metaverse devoid of brands because you’d be missing a lot of the things that you actually love,” says Nick Tran, the global head of marketing for TikTok.

Leaders of the brands spoke about their NFT strategies at Christie’s Art + Tech one-day conference on Thursday where artists and thought leaders spoke about the emerging technology of NFT and its impact on art and society.

Non-fungible tokens (NFTs), unique digital assets whose prices are driven by their scarcity, have not only created a way for digital artists to monetize innovation but also a way for brands to build a community and support a cause.

In June,  Anheuser-Busch minted NFTs for its premium Stella Artois beer and partnered with ZED RUN to create 50 unique horses for digital horse racing. The horses sold for millions of dollars, according to Spencer Gordon, who leads the marketing team at Anheuser-Busch. “When they sold we donated the money to help bars and restaurants in Europe that were suffering from the (Covid) crisis,” he says.

But the cut throat race to be one of the first brands to launch an NFT has resulted in a clutter of low-quality NFTs issued only for the sake of earning money rather than resonating with buyers. “There is no real functionality or even art to it,” Tran says.”There is no craft, it was literally just, let’s get this out quickly, get the headline, move on to the next thing. 95% of those are probably going to fail.”

So who got it right? Media brand TIME, which auctioned NFTs of its most iconic magazine covers and sold a token of historical narrative, is one example, Tran says. NBA’s Top Shot, through which fans can buy and sell digital collectibles is another.

For TikTok, the creator has always been in the center of the conversation, Tran says. The company has experimented with video resumes and partnered with Postmates to deliver trendy foods to customers through TikTok Treats. NFTs are a means to give the creators to become the true owners of and fans to become investors, he says.

It’s all about the story, says Paul Budnitz, founder and CEO of Superplastic, a universe of animated characters that live on social media. Though several brands have tried to taste the nectar of NFTs, those who can create utility for the buyers and find the right story to tell will win the game, he says.

“If you look at all these different cryptocurrencies, and the same is true for NFTs, it’s the story that brings the value,” Budnitz says.