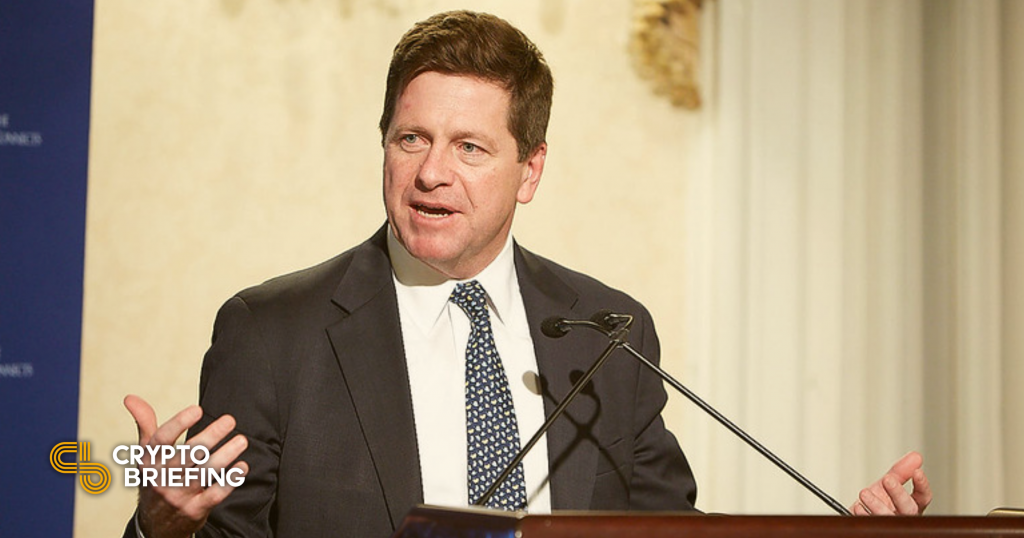 Clayton has joined the advisory council of One River Digital Asset Management, which oversees Bitcoin investments. The investment firm itself owns over $600 million of Bitcoin. After ending his term as chair of the SEC, Jay Clayton is returning to legal roles in various locations.

Jay Clayton, who served as chair of the U.S. Securities and Exchange Commission between May 2017 to December 2020, has taken advisory roles at multiple firms.

Most recently, he has been appointed to the advisory council of One River Digital Asset Management, a prominent crypto investment firm.

Clayton said about One River CEO Eric Peters: “We were impressed by Eric’s willingness to hear our varying views on the digitization of our monetary, banking, and capital markets ecosystem and One River’s commitment to transparency.”

Clayton is regarded as one of the crypto industry’s top villains because the SEC declined to approve Bitcoin ETFs under his leadership. Under Clayton, the SEC also made it harder for startups to run ICOs and most other types of initial tokens sales.

However, Clayton’s willingness to work with Bitcoin-adjacent firms should not be entirely surprising, given that he stated that Bitcoin is not a security in 2018. Unlike other cryptocurrencies, Bitcoin never went through an ICO or any other fundraiser.

Along with serving on One River’s advisory council, Clayton will rejoin his former law firm Sullivan & Cromwell LLP as a policy council advisor. He will also act as non-executive Chair of Apollo Global Management Inc. and serve as Adjunct Professor at the University of Pennsylvania Carey Law School.

Prior to the economic crisis resulting from the response to COVID-19, One River CEO Eric Peters focused his strategy based on volatility, bringing in returns of around 35% in 2020.

The firm has made significant investments in Bitcoin. In November, it announced a $600 million Bitcoin purchase. In recent statements, Peters additionally confirmed that One River plans to increase its Bitcoin and Ethereum holdings to $1 billion in the first half of 2021.

At the time of writing this author held Bitcoin and less than $15 of altcoins.

$322 Million: How The SEC Should Settle With Ripple Labs Over XRP

The U.S. Securities and Exchange Commission handed down a $24 million slap on the wrist to Block.one for allegedly selling unregistered securities in its $4 billion ICO, begging the question:…

President-elect Joe Biden has confirmed that he will name Gary Gensler as the next chairman of the U.S. Securities and Exchange Commission (SEC) in a new announcement.  Gensler Will Become…

CFTC Chairman Who Declared ETH a Commodity to Resign

Heath P. Tarbert announced his plans to step down as the Commodity Futures Trading Commission (CFTC) chairman in early 2021. “Today, I am announcing that I intend to resign my…