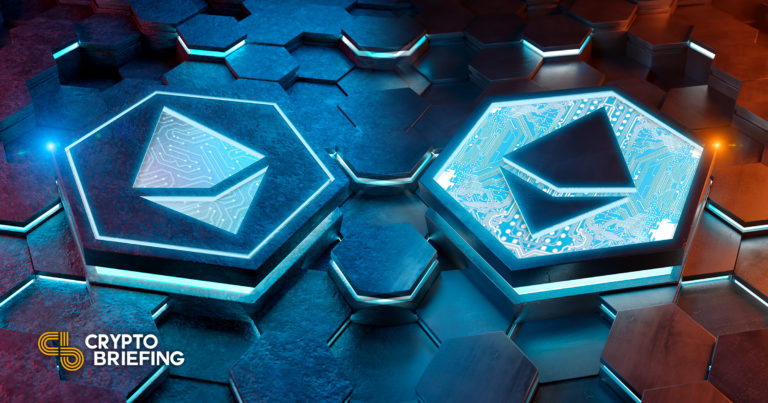 The Justin Sun-endorsed planned Ethereum fork, dubbed Ethereum PoW, is seeing bleak interest among investors on its first day of trading. ETHW has recorded only $3.6 million in trading volume across all three pairs on the Sun-backed Poloniex exchange. As things currently stand, only a few miners and smaller crypto exchanges support the fork, with most of the Ethereum community opposing it.

The push from Justin Sun and Chandler Guo for a Proof-of-Work Ethereum fork has so far drawn little interest from the market.

Poloniex’s EthereumPoW (ETHW) listing has seen only $3.6 million in volume on its first day of trading.

The token representing a potential Proof-of-Work based Ethereum fork, currently called EthereumPoW, has struggled to garner significant support from the broader crypto community despite heavy promotion from TRON founder Justin Sun and Chinese miner Chandler Gou. ETHW was listed on the Sun-backed Poloniex exchange over the weekend and has registered only $3.6 million in trading volume across all three of its trading pairs.

According to CoinGecko data, the fork’s top-traded pair, ETHW/ETH, recorded about $1.31 million in trading volume on the first day of trading, while ETHW/USDT and ETHW/USDD have respectively seen about $1.2 million and $1.1 million. By comparison, the top-traded Ethereum pair, ETH/USDT, currently records about $1 billion in daily volume on Binance alone.

Ethereum is expected to transition from a Proof-of-Work to a Proof-of-Stake-based consensus mechanism in mid-September. The landmark update, dubbed “the Merge,” will see Ethereum adopt a less energy-intensive security model and make miners obsolete. Under the new model, Ethereum users will be able to stake their ETH and order, verify, and settle transactions, securing the network and receiving ETH rewards in return.

Despite the Ethereum community’s overwhelming support for the Merge, certain factions of the crypto community—albeit still very small—are making plans to back offshoots of Ethereum that would adopt the old Proof-of-Work consensus mechanism. The most promising among the proposed forks is the so-called EthereumPoW fork, chiefly promoted by Sun and Guo, which seeks to continue running an old version of Ethereum with the mining “difficulty bomb” removed. Guo has reportedly employed over 60 developers to prepare the fork ahead of the Merge, while Sun listed ETHW in anticipation of the fork on his cryptocurrency exchange Poloniex Sunday.

However, the initial interest for Sun and Guo’s EthereumPoW fork seems to be low relative to the size of the market, with only big miners and some smaller, primarily Asian crypto exchanges signaling potential support, according to the chain’s official website (two of the top crypto exchanges, Binance and FTX, are also listed, though neither firm has expressed support for a fork).

Since Poloniex listed ETHW, BitMEX has announced that it plans to list futures for a potential Proof-of-Work-based Ethereum token. Users will be able to deposit Tether’s USDT as collateral and have exposure to the token with up to 2x leverage.

As things currently stand, most users, protocols, and developers seemingly plan to stay and keep building on Ethereum and are shunning the fork efforts as largely irrelevant. Speaking at a closed press conference ahead of EthSeoul Saturday, Ethereum co-founder Vitalik Buterin said that the proponents of the Proof-of-Work-based fork “own exchanges and are just trying to make a quick buck.”

Meanwhile, the most widely-integrated oracle provider, Chainlink, has denounced the Ethereum fork plans. “Users should be aware that forked versions of the Ethereum blockchain, including PoW forks, will not be supported by the Chainlink protocol,” the firm wrote in a blog post, citing alignment with both the Ethereum community’s desire to transition to Proof-of-Stake. Without support from established oracle providers, decentralized applications on EthereumPoW would likely struggle to scale and function properly.

Sun and Guo nevertheless plan to proceed with forking Ethereum following the Merge, without outlining any fundamental reason or possible benefits besides potentially providing existing Ethereum miners with an alternative chain to mine and keep making money. Guo expressed his support for the fork in a Saturday Bloomberg interview by saying that everyone “will be happy” because “everybody will get free money”—alluding to the possibility of a token airdrop for current ETH holders.

Sun, on the other hand, has already signaled financial support for EthereumPoW builders to bolster the fork’s perceived fundamental value. “We currently have more than 1 million #ETH. If #Ethereum hard fork succeeds, we will donate some forked #ETHW to #ETHW community and developers to build #ethereum ecosystem,” he tweeted last Thursday as Poloniex announced it was listing a Proof-of-Work token.

ETHW, the would-be native coin of the forked EthereumPoW chain, is currently changing hands for around $141, while Ethereum is trading at around $1,800.