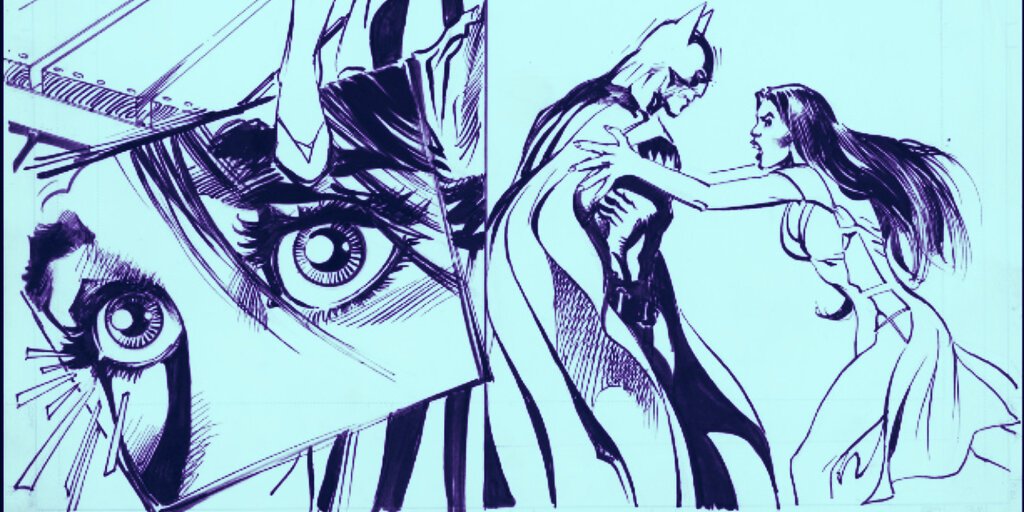 Neal Adams, a famous comics artist renowned for his work on Batman, X-Men and Fantastic Four, among many others, today announced an auction for nine unique non-fungible tokens (NFTs) representing his artworks.

The auction on the Portion.io marketplace includes NFTs representing pages from Batman: Odyssey, featuring Batman, Robin and Talia al Ghul, Adams told Decrypt in an email exchange. “I consider Batman: Odyssey to be my first Batman novel,” he said.

Adams’s NFT collection also includes three pages from his creator-owned graphic novel Blood, “a sci-fi adventure story with a truly unique hero” which was published by Dark Horse Comics, as well as a cover from Megalith #4: Rise of Magic, for which he created the character and concept.

“Another future Megalith cover, one of my personal favorite characters because he is a self-made superhero, and two Fantastic Four pages from the new Fantastic Four series ‘Antithesis,’ published by Marvel Comics this year,” Adams revealed.

In total, Adams’s NFT drop features five animated comic illustrations from 1994 to 2021 and four non-animated pages. “They are presentations of the original art the same way a Heritage of Christie’s would present an original piece,” he said.

NFTs are a type of cryptographically-unique, non-interchangeable tokens that can be used to represent digital media such as artwork, music, or video clips. NFTs can be minted as “one of a kind” or in limited batches, thus creating scarcity for the digital curiosities—and making them valuable to collectors.

Debates are still ongoing as to whether artists should be allowed to auction off artworks that contain copyrighted characters. In mid-March, DC Comics itself, which holds the rights to Batman, Superman, Wonder Woman, and other world-famous heroes, announced that it is “exploring opportunities” to enter the NFT market. Simultaneously, it issued a warning to artists.

“Please note that the offering for sale of any digital images featuring DC’s intellectual property with or without NFTs, whether rendered for DC’s publications or rendered outside the scope of one’s contractual engagement with DC, is not permitted,” the company’s letter to freelancers stated.

When asked about DC’s warning and whether the company is trying to monopolize the market for NFTs featuring its IP, Adams was dismissive.

“We are not aware of any decision from DC or other publishers to monopolize the market of NFTs,” he told Decrypt. “Comic publishers can put out editions in an NFT format because they own the copyrights to reproduce the artwork. What I am selling as an NFT is the original artwork. Two different things,” he noted.

Adamas explained that in the comics industry, rights for the original artworks remain with the artists who created them, while publishers only own the rights for their reproductions.

As for Adams’s NFT drop, collectors will be able to start placing their bids today, April 29, at 8 pm GMT.