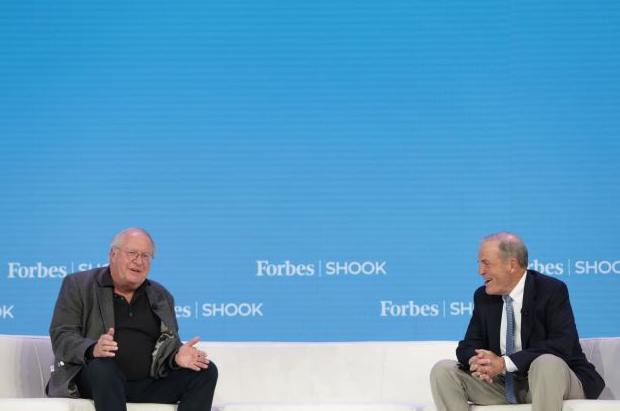 Bill Miller, the legendary value investor and former Legg Mason LM chairman and chief investment officer, doubled down on his bullish Bitcoin outlook in a virtual interview as part of the Forbes/SHOOK Top Advisor Summit at the Encore At Wynn hotel in Las Vegas.

During his decades at the Baltimore based investment management giant, Miller was the principle portfolio manager of the Legg Mason Capital Management Value Trust and famously beat the S&P 500 every year from 1991 to 2005. Miller is now the chairman of Miller Value Partners, with 16 employees and $3.6 billion in assets under management.

In conversation with Morgan Stanley Private Wealth Management managing director Marvin McIntyre, the 71-year-old Miller likened gold to the horse and buggy and Bitcoin to a Ferrari in response to the differing sentiments of JPMorgan Chase CEO Jamie Dimon and some of the headwinds facing the largest cryptocurrency including a crackdown in China and an uncertain regulatory future in the U.S.

Miller was an early adopter of Bitcoin in 2017, when his firm put a 5% investment in the well-known cryptocurrency. Miller says his initial cost per coin was about $200 and has since risen to about $800 with his latest major buy happening in the spring when the price was cut in half from over $60,000 to around $30,000 . He even told the conference crowd he had bought Bitcoin earlier in the day before taking the stage virtually.

In his illustrious career, Miller’s calling card has been value investing and along those lines he told the assembled group of financial advisors some of his undervalued stock picks including cookware manufacturer Tupperware Brands TUP , digital car sales company Vroom, drug manufacturer Teva Pharmaceuticals RARX and automotive manufacturer General Motors GM . Miller cited Tupperware’s price movement from near $1 at the height of the pandemic to over $40 before settling in around $21, still below value in his mind.

Miller says he sees VRoom as second in the market to Carvana but that the online car shopping marketplace is a huge opportunity. He also mentioned his affinity for the management team which came over from Booking.com. Teva’s generic drug business excites Miller with the company only trading at 7x earnings and an expectation that it will spike when a settlement is reached in the pharmaceutical space around the opioid crisis. After decades of stagnation in the General Motors stock price, Miller thinks it will break that streak and predicts growth.

The largest holdings in the mutual fund he manages, the Miller Opportunity Trust include Amazon, IT services company DXC Technology DXC and Google GOOG parent company Alphabet. Facebook, which has faced outages and negative headlines over the past month is also a significant holding at 3.7%. The fund is nearly one-third invested in consumer discretionary.

While Miller’s funds have beaten their benchmarks dating back to inception, in 2009 for the Opportunity Trust and 2014 for the Income Fund, it has been a difficult summer for both vehicles. The former was down just over 19% after fees from July through September as compared to the S&P 500 which was up just over half a percent. The fund run by Miller’s son was similarly under its target for the same time period, down over 8.1% after fees compared to its benchmark, a high yield master fund run by Bank of America Merrill Lynch BAC which was up just under a percent.