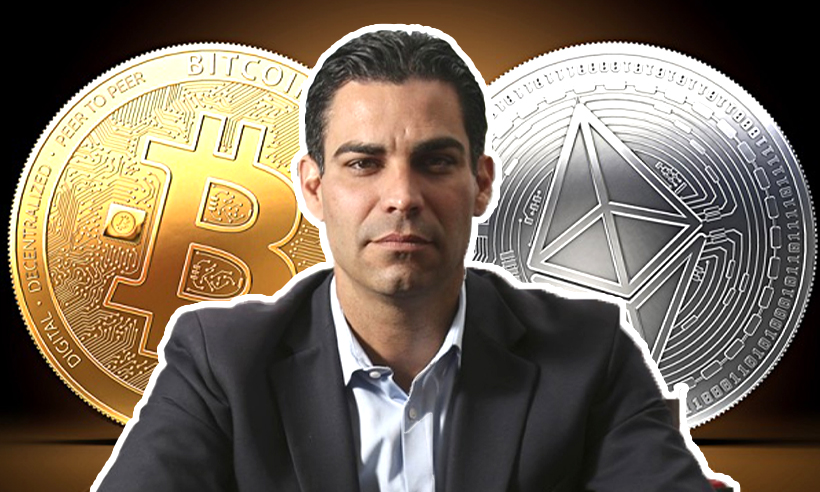 Miami Mayor Francis Suarez says he owns both Bitcoin and Ethereum during an interview with CNBC on June 3 and that he’s further planning to buy the dip.

“I own Bitcoin and I own Ethereum,” Suarez said, adding, “I haven’t bought the dip yet but I’m planning to. I’ve just been too busy.”

The mayor, in his interview, revealed he had purchased Bitcoin in the “high 30s” and Ethereum when the price of the cryptocurrency was hovering around $1,500.

Suarez said he bought both BTC and ETH purchases after the United States Senate passed the $1.9-trillion stimulus bill for COVID-19 relief in March, adding:

“I knew at that point that inflation was inevitable and that there had to be some sort of a hedge.”

At the moment, when the stimulus bill was passed, Bitcoin skyrocketed past $54,000 to reaching a new all-time high above $64,000 to experience significant losses in May, sliding almost 50%.

As one of the few political figures in the country to speak positively about cryptocurrencies, Suarez has been attracting crypto companies to Miami, a priority of his administration.

Since the beginning of the year, Mayor has been building out a cryptocurrency team to help Miami become a crypto hub. At the same time, Miami-Dade County residents learned that they may soon be able to pay taxes in crypto.

He even announced recently that crypto exchange and wallet provider Blockchain.com is moving its U.S. headquarters to Miami from New York.