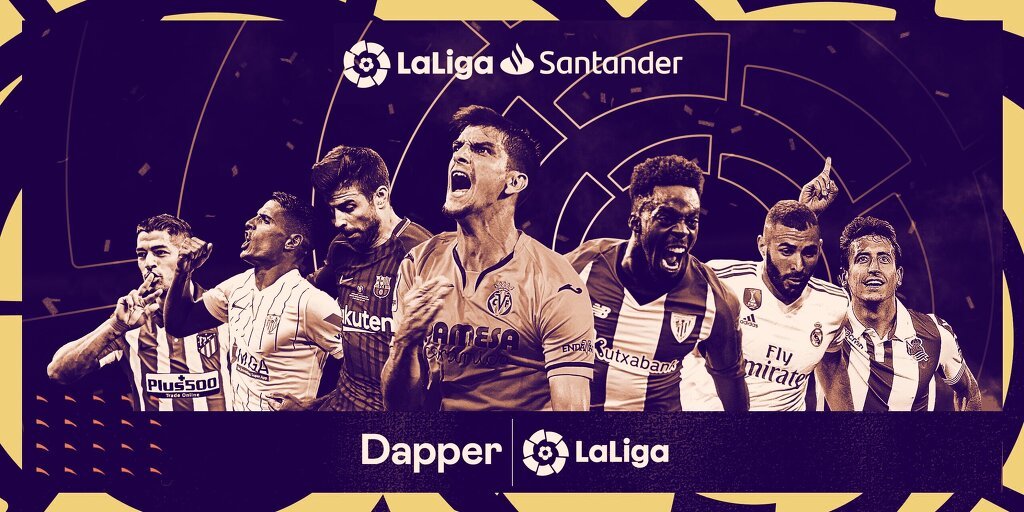 Dapper Labs has partnered with LaLiga to launch an NFT marketplace based on the top Spanish soccer division. The company has also raised $250 million in new funding. Dapper is now valued at $7.6 billion, a source tells Decrypt.

Dapper Labs helped lead the charge of NFT collectibles into the mainstream consciousness earlier this year with the rise of NBA Top Shot, and now the firm has announced plans to launch another sports-centric NFT marketplace based on one of the world’s leading soccer leagues.

Today, Dapper revealed a collaboration with LaLiga, the top-level Spanish soccer division, and all of its teams—including Real Madrid, FC Barcelona, Atlético de Madrid, and more. Like NBA Top Shot, the marketplace will live on Dapper’s own bespoke Flow blockchain, with plans to launch the project in summer 2022.

The latest funding round values Dapper Labs at $7.6 billion, a source close to the company told Decrypt. Dapper previously raised $305 million in March at a reported valuation of $2.6 billion, with investors such as retired NBA star Michael Jordan and current pro Kevin Durant participating in that round.

The new LaLiga project will be functionally similar to NBA Top Shot at its core, focusing on NFT “moments,” or licensed video highlights of top plays. An NFT acts like a deed of ownership for a digital item, and in the case of Top Shot, you’re buying what’s effectively a video-infused digital trading card. The LaLiga marketplace will follow a similar format.

However, soccer doesn’t provide quite the same steady flow of showy, in-your-face plays as basketball does. Caty Tedman, Dapper’s Head of Partnerships, told Decrypt that creating LaLiga NFT moments will require more “finesse,” and require Dapper to be “really conscientious about how we treat content.” On the other hand, there’s a lot more shared history amongst teams in the league, and rivalries can make for compelling content.

“A lot of the things that make sports special are the things that we want to lean into,” she said. “If you look at some of the rivalries in La Liga, you’re talking about literally 100-year rivalries, and we don’t really have that in North American sports. We think that it’ll be really fun to lean into the derbies and El Clásico.”

Dapper Labs and LaLiga began talking back in early 2019, Tedman said, well before NBA Top Shot launched the following year. It took a while to pin down the details and help the league become comfortable with NFT collectibles, but Tedman suggested that the global reach of soccer could help the marketplace tap into an even broader audience than Top Shot.

Dapper’s announcement comes on the back of LaLiga joining Sorare, an Ethereum-based fantasy soccer game built around collectible NFT player cards. Sorare—which announced a $680 million funding round at a $4.3 billion valuation this week—doesn’t use video footage for its NFTs, plus the fantasy sports angle is a differentiator from what Dapper has planned.

“I hope that there’s room for different approaches and takes,” Tedman replied, when asked whether multiple LaLiga NFT projects could dilute the market. “I think we’re very focused on distilling the best moments of sport, and making those something that you keep forever.”

“I would hope that there’s a world in which we all work together, and that this ecosystem is truly playing into the metaverse we all keep talking about,” she added. “I think if we each do what we’re good at, there’s a ton of room to play.”

LaLiga will mark Dapper’s second sports-centric marketplace when it opens next year, following NBA Top Shot, which recently added the WNBA to its platform. The firm also announced plans with Ultimate Fighting Championship in February 2020, but has yet to reveal the fruits of that collaboration. Still, you can bet on additional sports NFT projects from Dapper Labs ahead.

“Oh, for sure,” Tedman told Decrypt. “In the near future, we’ll have more to say on that topic.”