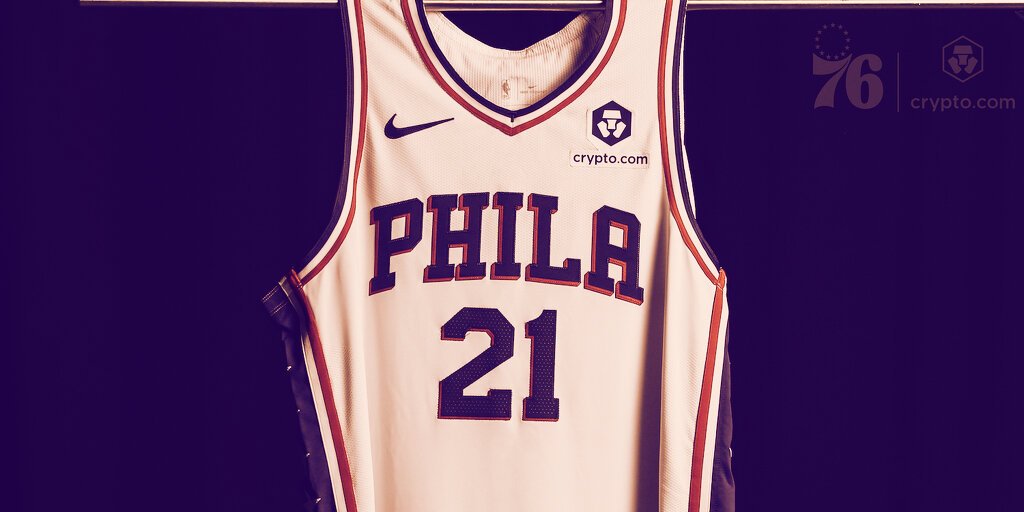 Crypto.com has announced a partnership with NBA team, the Philadelphia 76ers. The exchange will have a patch on team jerseys, and will release 76ers NFT collectibles through its marketplace.

Less than a week after adding its first esports partner in Fnatic, cryptocurrency exchange Crypto.com’s sports sponsorship spending spree continues today with the announcement of a deal with the NBA’s Philadelphia 76ers.

Crypto.com will become the team’s official jersey patch partner, with all four variants of the 76ers’ new jersey featuring the exchange’s logo on the left shoulder. The exchange will be an international marketing partner of the team and can also use 76ers branding in marketing and advertising efforts.

Furthermore, Crypto.com branding will be featured at the team’s Wells Fargo Center arena in Philadelphia, on both the baseline apron and courtside displays. The deal also includes an advertising presence for Crypto.com across the 76ers’ television broadcasts and social media and marketing channels.

Crypto.com will also release the team’s first official NFT collectibles through its marketplace. An NFT acts as a deed of ownership to a provably scarce digital item, and can represent images, video files, and other types of collectibles. Dapper Labs’ NBA Top Shot has been one of the most popular NFT projects to date.

Terms and length of the deal were not disclosed, although 76ers Head of Business Operations Chris Heck described it as a “long-term partnership” in today’s announcement.

Crypto.com has made a number of deals across the sports landscape in recent months, including partnerships with leagues like Formula 1 and Ultimate Fighting Championship, as well as the NHL’s Montreal Canadiens, soccer club Paris Saint-Germain F.C., and F1’s Aston Martin Cognizant. This is the exchange’s first deal with an NBA team.

just had a great chat with @SBF_FTX, asked him if he can tell for sure that all the sports sponsorships are boosting customer acquisition. He said he can’t quite prove that, but anecdotally it has been huge for name brand awareness. “You can’t just buy that with Facebook ads.”

That spending has coincided with a rise in web traffic to FTX of late. FTX founder and CEO Sam Bankman-Fried told Decrypt Editor-in-Chief Daniel Roberts last week that while he couldn’t prove that its sports sponsorship efforts are boosting customer acquisition, the anecdotal rise in name recognition has been massive.

Crypto.com may be looking for the same kind of awareness bump, although it’s unclear whether that’s been the case so far—a look at web traffic data from SimilarWeb doesn’t show the same kind of rise that FTX has enjoyed in recent months.

When asked last week about the impact of its sports partnerships to date, Crypto.com CEO Kris Marszalek wouldn’t share specifics, only telling Decrypt, “We have been overwhelmed by how well all of our partnerships have been received by fans around the world.”