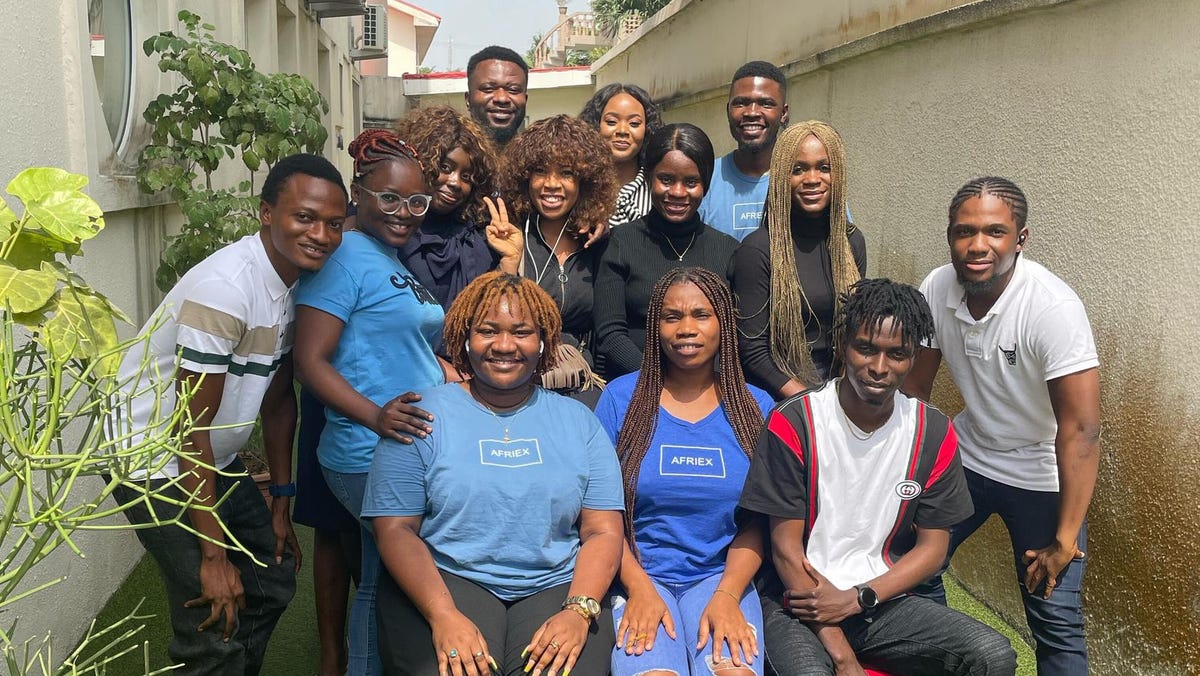 Afriex lets users transfer money through stablecoins in less time and at a lower cost than a wire … [+] transfer.

When Tope Alabi moved back to Nigeria in 2019 after 20 years in the U.S., he knew he wanted to start a company applying what he learned working at blockchain consultant Consensus. He and future cofounder John Obirije started testing a number of ideas ranging from a hip hop chat bot to a trivia game — all of which failed. But they realized throughout the trial and error that they consistently ran into the same problem: trying to pay business expenses for the various upstarts with money tied up in bank accounts in the U.S.

They decided to create a money transfer system that utilized blockchain to enable users to send funds by converting them into stablecoins — which are cryptocurrencies backed by reserve assets. This process makes the transaction free and quicker than an existing service like Wise which charges a 6.45% fee and can take a few days to process. They launched the service, Afriex, in 2019 and the traction was instant. “Things took off from there,” Alabi tells Forbes. “I don’t know if it was the pandemic but we really started growing fast.” The service originally focused on Nigeria and has since expanded into Uganda, Kenya and Ghana.

Tope Alabi is a cofounder and the CEO of fintech Afriex.

Afriex launched amongst an explosion of fintech companies targeting underserved, and often overlooked, consumers in Africa. Data from CB Insights found that more than $1.4 billion was invested into African fintech companies in 2021, a nearly 7x increase over 2020. Fintech companies raised more than half of the $2.2 billion total of venture capital funding across the continent in 2021. One possible reason these companies are gobbling up capital is because they are seeing strong traction.

Afriex processes more than $5 million in monthly transfers, Wise moves an average of £4 billion ($5.2 billion) a month for comparison, but Afriex has grown its customer base by 500% in the last six months with half of its active users using the platform more than once a week. The startup makes money by arbitraging the currency and crypto exchange rates when a customer transacts. Afriex declined to share its revenue. It raised a $1.3 million seed round last May and has just closed a $10 million Series A round at a $60 million valuation. The financing was coled by Sequoia Capital China and Dragonfly Capital with participation from Goldentree, Stellar Foundation and Exceptional Capital, among others.

Dragonfly Capital managing partner Haseeb Qureshi tells Forbes that he met Alabi when he was a mentor at a crypto startup school run by A16z. Alabi was in his group. He says that he was really impressed by Alibi and by Afriex but he sat out the seed round because he wasn’t sure how it would scale after seeing many founders try and fail to build crypto businesses targeting Africa. But after seeing the company’s traction, he thought Afriex may have cracked the code. “A big strength of the company is being able to straddle the entire corridor between the U.S. and Africa where many others have tried to succeed and haven’t,” he says. “The reality is that if you want to succeed in emerging markets you need a really strong ground game.”

While Afriex is currently just focused on its core money transfer product, Alabi has ambitious goals for the platform. He hopes to use it to launch a stablecoin and has already inked a partnership with Visa to offer Afriex users credit and debit cards later this year.

Alabi hopes Afriex will be able to give people in Africa a place to store their money that doesn’t fluctuate or get impacted by external forces as much as the current currencies do. For example, Alabi’s uncle in Nigeria loses up to 10% of each paycheck just due to currency fluctuations, he says. ”Because we are building this network of connected financial institutions, we have built on-ramps for local Nigerian banks and on-ramps for local currency exchanges,” he says. “We are building this web3 mesh of financial institutions that could almost become something like the next Visa.”