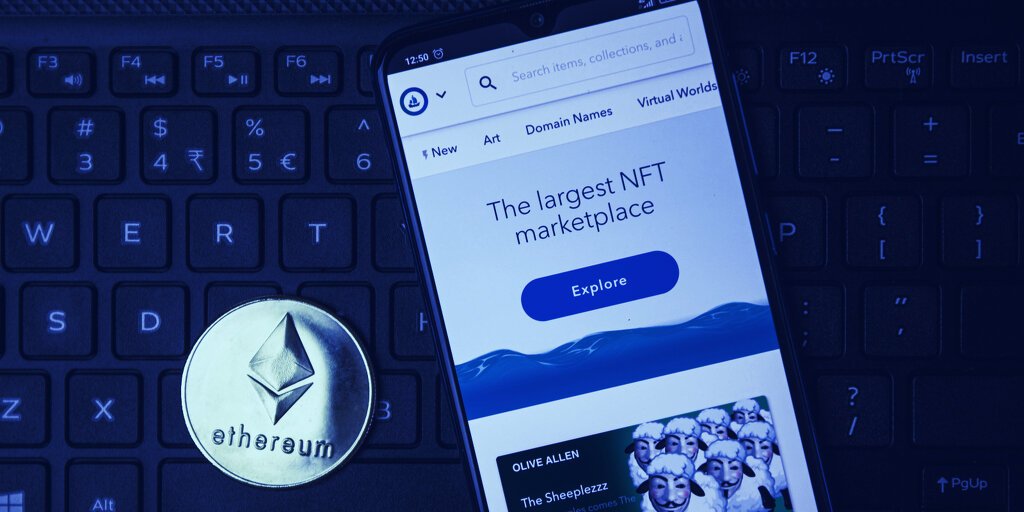 Ethereum-based NFT marketplace OpenSea has hit an all-time high of $1.14 billion in weekly trading volume, up 170% from the previous week.

NFTs, or non-fungible tokens, are blockchain-based tokens that demonstrate ownership of digital items, such as images or video files, or physical assets.

OpenSea is a popular marketplace for trading NFT art collectibles such as CryptoPunks, Bored Ape Yacht Club, and Pudgy Penguins.

The marketplace has facilitated $2.49 billion worth of trades in August so far, already 666% more than the previous record of $326 million set last month.

The next most popular marketplace this month is SuperRare, which has recorded $23 million. Foundation comes third with $14 million.

Although some projects like NBA Top Shot are built on the Flow blockchain, the majority of NFTs are housed on Ethereum. On Ethereum, OpenSea dominates the market: 98.3% of all Ethereum-based NFT activity has taken place on OpenSea this month.

OpenSea’s most recent ascent began when its daily trading volume jumped from $13.4 million on July 30 to $39.4 million the next day, the all-time high at the time, according to data from analytics site Dune Analytics.

Since that steep increase in OpenSea’s trading volume, the marketplace has set and broken record after record. On Tuesday, OpenSea’s daily trading volume reached a new peak of $208 million, breaking a record of $193 million set last Sunday. The third-highest daily volume is $178 million, achieved yesterday.

The July 31 surge was due to a trading frenzy for CryptoPunks avatars, pushing the daily trading volume of the four-year-old NFT project up from $1.8 million to $41.5 million within a week.  The project’s total sales have now passed $1 billion, and its trading volume has gone up 649%, according to data from OpenSea.

Although CryptoPunks is not counted in the marketplace’s trading tally, the frenzy around the top collectible project has certainly helped pump numbers for OpenSea.

Other NFT projects trade exclusively on OpenSea, and many new collectibles have sprung up this month.

Today, Bored Ape Yacht Club, the NFT project that NBA star Stephen Curry aped into this morning, has broken its daily trading record with $39 million of sales, according to CryptoSlam.io.

Demand for CryptoPunks rose sharply after Visa announced it had purchased one of the avatars for $165,00 on Monday. Although that’s a tiny figure for a payments giant like Visa, it’s a big step for a once-obscure NFT project.

This week has been OpenSea’s best. The pressure for the marketplace to continue its upwards trajectory is certainly on.