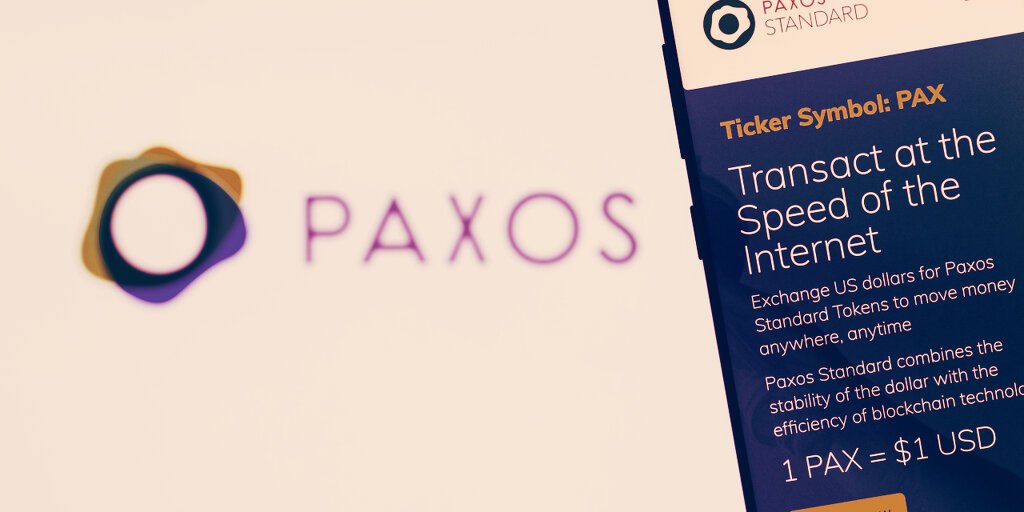 Paxos, the New York-based firm that made its name with a stablecoin and gold-backed tokens, is quietly building a crypto infrastructure empire. On Thursday, the company announced it has raised a $300 million Series D funding round, bringing the total it’s raised to $500 million, and valuing Paxos at $2.4 billion.

In an interview with Decrypt, CEO Charles Cascarilla said the new funding will help accelerate Paxos’s plans to scale its operations, while signaling to potential partners in the finance industry that the company will be around for years to come.

“Clearly, the industry has hit a different trajectory and so has Paxos,” said Cascarilla, describing the crypto world’s phenomenal growth in the last year.

Cascarilla also noted that Paxos plans to add “3-5 participants on the scale of PayPal” in the coming year.

PayPal become one of the company’s flagship clients last year when the FinTech giant decided to let users buy and sell Bitcoin and other cryptocurrencies on its platform and, more recently, by means of its Venmo app. Rather than build its own crypto infrastructure, PayPal decided to have Paxos handle its backend operations.

The partnership also underscores how Paxos has developed a versatile business model. That model includes its own crypto products such as more than 100,000 ounces world of gold-backed tokens and its own stablecoin, now the seventh-largest by market cap.

But it also includes providing infrastructure to other firms, including PayPal and the digital bank Revolut, that want to provide crypto without taking on the full technical or regulatory obligations themselves. In this sense, Paxos is akin to Cross River, a firm that lets numerous financial startups use its national bank charter in exchange for a firm—even as most consumers remain unaware of its existence. (Last week, Paxos became the third crypto company to receive approval for a federal bank charter of its own).

And like Coinbase, which recently became the first major crypto firm to go public, Paxos touts its record of staying on the right side of regulators as integral to its success. According to Cascarilla, the company will use a portion of the new funding it raised to invest in compliance operations, as well as for potential acquisitions.

Meanwhile, Paxos is also building tools that allow banks and other firms to settle securities trades on a blockchain. The tool is still in the experimental phase but, already, giants like Credit Suisse are testing it in a real-world environment.

For now, Cascarilla says Paxos is not profitable, in part because of a near-zero interest rate environment, which means it can make little money from the cash and commodities it holds. But he added the company is pulling in significant revenue from its infrastructure agreements with other firms, and that he expects Paxos to start making money before too long.