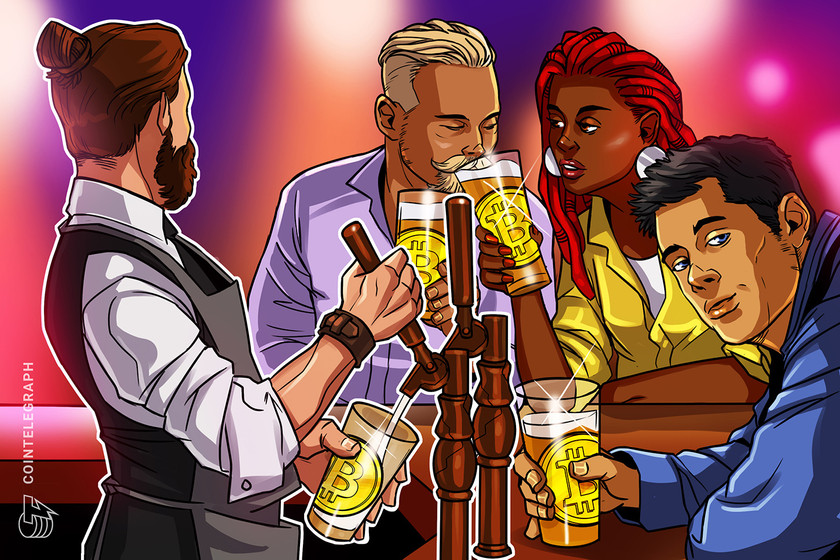 Cointelegraph took a trip to Satoshi’s Place on Friday, a Bitcoin (BTC) hub in Greater Manchester. Named after the anonymous creator of the world’s largest and most widely accepted cryptocurrency, the bar and workspace offer workshops, coworking spaces for local businesses and Bitcoin-inspired cocktails.

Adam, the founder (who chose not to share his surname), first heard about Bitcoin in 2012 and has spent the past 10 years experimenting with ways to onboard and educate people about the magic internet money. He told Cointelegraph over a beer — paid for by Bitcoin over the Lightning Network — that it’s the first of many forays into the Bitcoin business.

Everything in the space — absolutely everything — is Bitcoin-themed or Bitcoin-branded. From orange being the dominant color to rare Bitcoin art adorning the walls to the hand dryer in the loos, which generates heat from — you guessed it — a Bitcoin miner plugged in upstairs.

The “Gold Rush” was the most popular cocktail on the night.

Adam explained that over the past four years he’s focused his efforts on Bitcoin merchant adoptin, a growing trend in the United Kingdom. Satoshi’s Place began life as a coffee shop and then a pizzeria back in 2018. At first, customers could buy coffees with Bitcoin and even use a Bitcoin ATM to buy and sell Bitcoin, “Back when it was legal,” he joked.

“People were putting £20,000 worth of cash into an ATM on a monthly. From teenagers to I think the eldest was 93 years old.”

Bitcoin ATMs were forced to shutter by the Financial Conduct Authority in March this year. Adam explained that despite the fact that they did everything by the book — “a full exchange system literally to the minute,” — the banks made life hard.

An example that’s part of a wider trend, Bitcoin Businesses in the UK are beleaguered by banks. Adam’s experience is no different: he had issues with Barclays while operating a UK-based crypto festival called CoinFest and has had bank accounts blocked and emails ignored despite best efforts do business above board.

Satoshi’s Place is his third attempt at creating a by-the-book space for Bitcoin enthusiasts and precoiners to meet and learn what is money, and why Bitcoin might be a better one. Thanks to the Lightning Network, a layer-2 Bitcoin solution, payments are now near-instant, frictionless and basically free. Many punters, Bitcoin enthusiasts, and even first-timers bought burgers and beverages with Bitcoin at the bar on Friday.

The bar uses solutions from Fast Bitcoins and CoinCorner, two Bitcoin companies based on the Isle of Man. CoinCorner’s team made the trip across the Irish Sea to mingle on Friday and host a Bitcoin workshop the following day.

Elsewhere, Nathan Day, “Pleb at Large” and contributor to BTCMap.Org, an open source map to show where Bitcoiners can spend Satoshis, demonstrated Bitcoin-themed games. Jordan Walker, CEO at the Bitcoin Collective, the group behind the UK Bitcoin Conference, was schooled by Day’s son at Sats-Man (like Pac-Man but with Satoshis).

The workshops at Satoshi’s Place will be as close to free as possible and open to all: Bitcoin the currency doesn’t discriminate, after all. Workshops in the workspace at the front room cover “Everything from lightning education to Bitcoin for kids, Bitcoin development, all different types. There are about 16 hosts that I’ve got up to now that want to do workshops.”

It’s been more than a decade since Satoshi Nakamoto stepped away from public involvement in the blockchain community. It makes you wonder what they would have thought of spaces like this, all these years later.