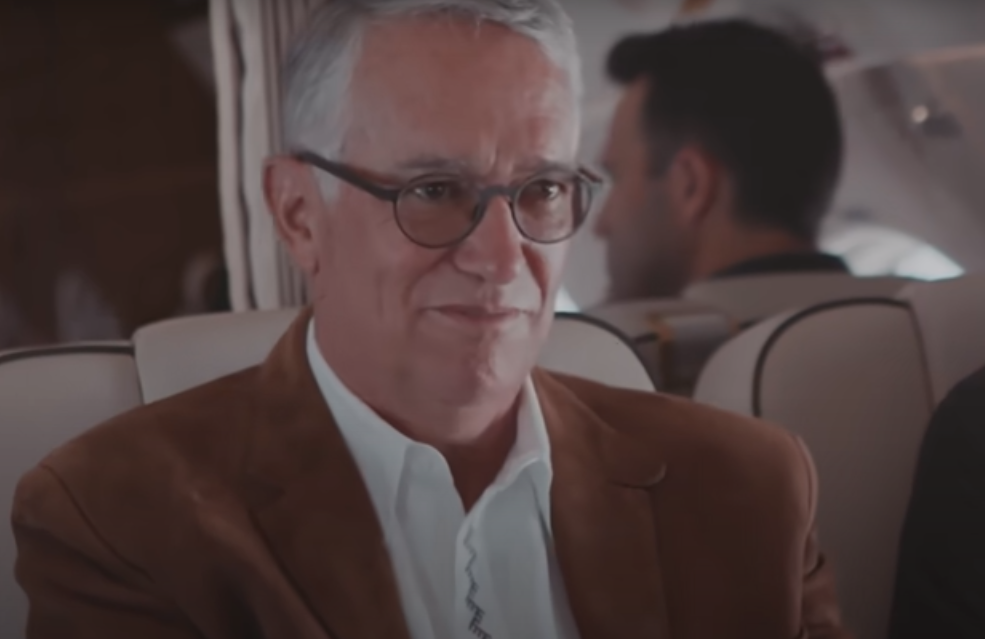 By now, Mexican billionaire Ricardo Salinas is a bitcoin staple. His keynote at the Bitcoin 2022 conference was the talk of the town, and the fact that he has 10% of his assets in bitcoin can’t be ignored. After all, he’s reportedly the third richest person in Mexico, so that 10% probably represents an ungodly amount. And today, we’re going to dissect this Ricardo Salinas interview by Max Keiser and Stacy Herbert from his private jet.

That’s right, Keiser and Herbert transformed the plane ride that culminated in this El Salvador visit into content. This interview is so full of jewels that we’re going to have to break it into parts. Consider the following article a companion piece to the video, which you should definitely watch. We are going to focus on Bitcoin and the current financial system, but the three characters discuss other topics like Ricardo Salina’s social media presence, Venice, and the meaning of the word “pendejo.”

How did a born-with-a-silver-spoon Mexican entrepreneur discover bitcoin? “My father and I have always been very conscious about how the monetary debasement was going on,” starts Ricardo Salinas, after confessing both of them were “gold bugs.” During the interview, Salinas doesn’t utter one bad word about gold, which he doesn’t consider bitcoin’s competition. On the other hand, he always refers to the current system as “The fiat fraud.”

Ricardo Salinas first bought bitcoin as a trade, and suddenly realized it was even better than gold because of its inherent characteristics:

Still, Salinas considers bitcoin “an asset that you can trade. It’s an asset, just like an Apple stock or a gold bar.” Later on, though, when comparing bitcoin to gold Salinas says that bitcoin is  “a better asset because it can be more secure, it can be more portable (…) it’s more divisible, verifiable. It’s just a better asset in many ways.”

And he’s right, bitcoin is an asset. Nevertheless, it’s also so much more.

Salinas On El Salvador And The Fiat System

That private jet is heading to El Salvador, where Ricardo Salinas met with President Bukele. About their Bitcoin Law, he says, “to stop being a colony, it takes more than just issuing your own currency or having solid currency.” However, he also sees the possible disadvantages, “it’s not easy to just be sovereign, meaning cutting ties. It’s not good for anyone to cut ties.”

In general, Salinas has a slightly apocalyptic view of what’s happening. He thinks that bitcoin is “not good for the people in power. And they’re not giving up their power lightly.” However, that doesn’t mean he’s in favor of the fiat fraud. Not in the slightest. “The fiat system has allowed the big state to exist, and that means two things. It means the war state, the national security state, and on the other hand, it means the welfare state. So I call it the welfare-warfare state. That is what fiat has allowed to happen.”

On Ownership And Digital Money

“Making payments in a digital way is absolutely the future,” Salinas says. His bank, the Banco Azteca, hasn’t merged with the bitcoin network because of regulatory constraints. Speaking about confiscation, Herbert brings how the US froze the Russian reserves, Salinas puts the example of the Canadian truckers and states, “everything you have in fiat doesn’t really belong to you.”

When Keiser brings up the possibility of bitcoin changing the current system for the better, Salinas is not as hopeful. “The majority of the people are having a good life by living at the expense of another minority,” he says, bringing the budgets of the Military-Industrial Complex and the Welfare State as examples. The “fiat fraud is what facilitates the current day slavery,” Ricardo Salinas states.

What’s the solution, though? You guessed it. “I love Bitcoin because it puts everyone on an equal base in terms of purchasing power, and it gives no unfair advantage,” he says.”We need an environment of freedom which permits, and encourages, and applauds innovation.” That gives rise to a cycle, “people copy innovation and make it better. Competition.” However, we don’t have that because we don’t have freedom.

That’s it for this first part. Tune in tomorrow for the second part of this companion piece to the “Mexican Billionaire Ricardo Salinas: Private Jet Bitcoin Interview w/ Max Keiser & Stacy Herbert” video. Before we go, Bitcoinist leaves you with this Ricardo Salinas jewel for you to reflect on: “To be able to see the truth is liberating. Even if the truth is not what you want.”