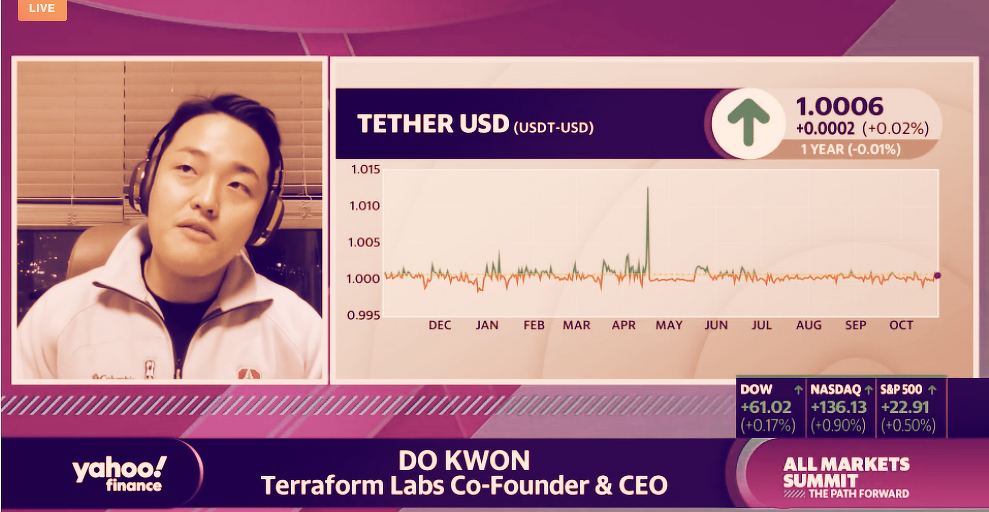 The SEC served Terraform Labs and its co-founder with a subpoena last month. Both have sued the agency.

Three days after suing the U.S. Securities and Exchange Commission over receiving a subpoena from the agency, Terraform Labs co-founder and CEO Do Kwon struck a more conciliatory tone about the regulatory landscape.

Speaking at the Yahoo Finance All Markets Summit today, Kwon suggested that friction between regulators and the crypto industry typically leads to “frameworks that are a little bit more accepting of innovation and change.”

On Friday evening, Kwon and Terraform Labs filed a complaint against the SEC in the U.S. District Court for the Southern District of New York claiming that the agency’s issuance of two subpoenas violated the 14th amendment’s due process clause as well as SEC rules and federal regulations. The lawsuit further contends that the agency “could not secure personal jurisdiction over” Singapore-based Terraform Labs or Kwon, but that Kwon and attorneys attended a 5-hour interview in July.

Ultimately, a process server served Kwon with an SEC subpoena on September 20, as he was preparing to speak at the Messari Mainnet conference, according to the lawsuit.

It’s not hard to see why the SEC would be interested in Terraform and Kwon. Last December, the project launched Mirror Protocol, which enables synthetic versions of U.S. stocks and other assets so that people outside America can easily trade them; instead of buying and selling TSLA on the New York Stock Exchange, you can buy and sell mTSLA at nearly identical prices via blockchain.

But since it’s a decentralized finance protocol, there’s no guarantee that the product can’t be accessed by U.S. nationals, at which point the SEC could argue it is an unregistered securities offering. DeFi refers to blockchain-based protocols that allow people to buy, sell, or trade crypto assets without going through an intermediary.

Speaking at the summit today, SEC Chair Gary Gensler said DeFi would “end poorly” if not properly regulated. When it was his turn to speak, Kwon said Terraform is “happy” to educate regulators about cryptocurrency.

“There’s just an explosion of lots of different projects coming into the crypto industry, and usually when there’s an explosion of a new industry, some of which may not fit in nicely with existing regulatory or incumbent networks, I think that causes a bit of conflict and friction,” he said.

“I think a lot of the tensions that are present between some of the leading networks in DeFi and regulators in places across the world, the United States being no exception, is indicative and symptomatic of what’s happening in that tension,” he added. “But through this dialogue and exchange, you generally end up with frameworks that are a little bit more accepting of innovation and change.”

But even if they don’t, he thinks Mirror is here to stay—or, at least, that the SEC will have his hands full trying to shut it down. That would make it an interesting target for an agency that has allowed “sufficiently decentralized” projects such as Ethereum a pass, however ill-defined the term remains.

“For Mirror Protocol specifically, when Mirror was first created, we didn’t pre-mine any portion of the MIR tokens,” he said. “That’s kind of novel in crypto, we kind of gave it all away. And it’s been fascinating to see an asset go all the way up to $12 and us having very little financial exposure to that. We cannot shut the protocol down.”