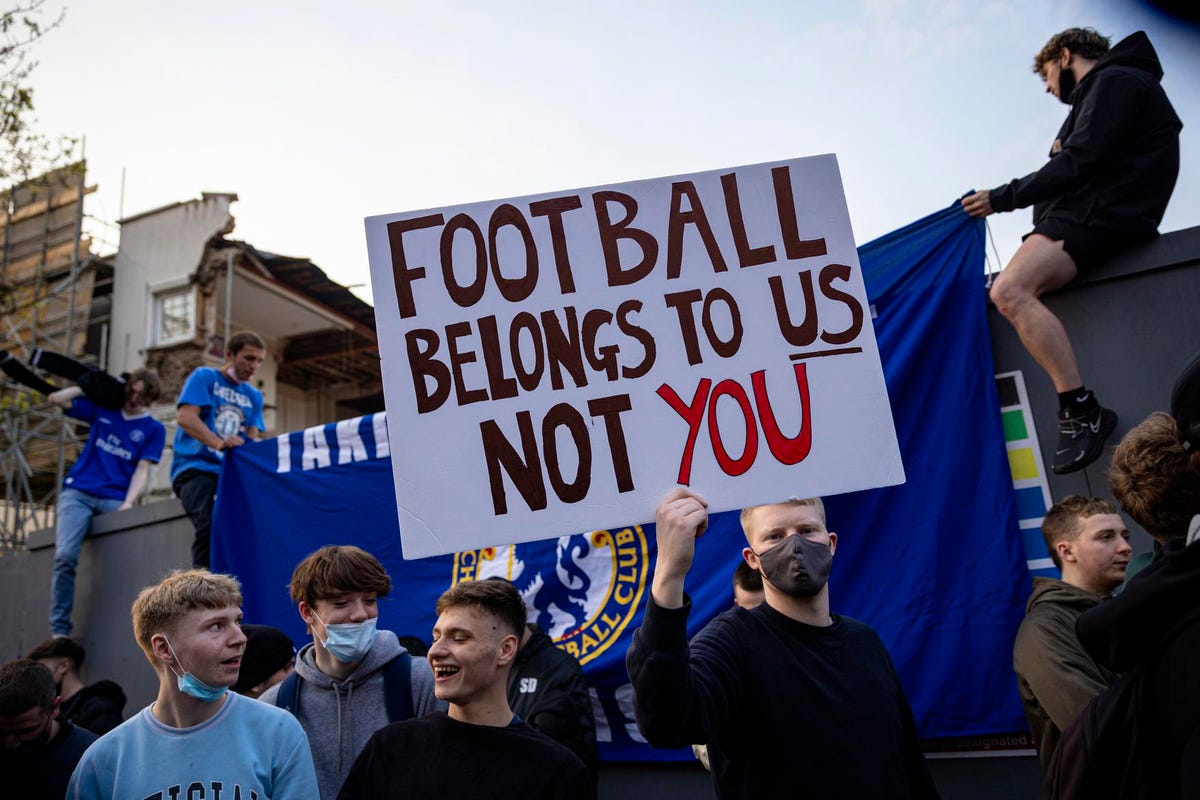 LONDON, ENGLAND – APRIL 20: Chelsea Football Club fans celebrate outside the team’s Stamford Bridge … [+] stadium on April 20, 2021 in London, England, after it was announced that Chelsea Football Club would seek to withdraw from the new European Super League. Six English premier league teams have announced they are part of plans for a breakaway European Super League. Arsenal, Manchester United, Manchester City, Liverpool, Chelsea and Tottenham Hotspur will join 12 other European teams in a closed league similar to that of the NFL American Football League. In a statement released last night, the new competition “is intended to commence as soon as practicable” potentially in August. (Photo by Rob Pinney/Getty Images)

“When was the last time in any field of human activity that a billionaire was forced to back down and told that he couldn’t do what he wanted?” asks Stefan Szymanski, a professor of sports management at the University of Michigan and co-author of the book Soccernomics. He doesn’t need to think long to identify 2021’s most important soccer story: the rise and fall of the European Super League.

In a head-spinning 72 hours in April, a cabal of European elite clubs went nuclear with their plans to launch a breakaway, closed competition – a vehicle for a short-term cash injection and a long-term stranglehold of the club game. The plan became a PR disaster and then simply a smouldering wreck, defeated by a storm of protest from every corner of the industry and beyond. Fans, ruling bodies and even governments united in a vehement rebuke of the rogue clubs.

Real Madrid’s Florentino Perez was one of the driving forces behind the Super League, but Szymanski singles out the American involvement. “It represented an absolutely root and branch challenge to the basic system,” reflects Szymanski. “The number of times that Liverpool gets to play Bayern Munich and Manchester City gets to play Barcelona is very limited. There is huge pent-up demand for those games. That’s why JP Morgan was willing to underwrite this to the tune of $2 billion. They’re not sentimentalists and $2 billion is a lot of money.  A number of American owners in the United Kingdom were clearly behind this, but they were utterly shocked by the reaction.”

“It’s a fascinating cultural phenomenon: you have incredibly rich people who can buy all sorts of good advice, but they live in a bubble and they couldn’t hear what was obvious to everyone. They had to sort of turn around and apologize with their tail between their legs. It’s a conflict between two systems. Are we going to preserve the traditional European system that fans seem to like or are we going the American way, allowing billionaires to reshape the game in order to deliver to consumers?”

The Super League’s detractors had an arsenal of arguments: the sacrosanct nature of the soccer pyramid, competition, the secrecy around the project, the fate of domestic leagues…The Super League was another expression of soccer’s embrace of hyper-capitalism, based on greed, exploitation and the growing inequality in the game.

Soccer has been rife with tensions between the haves and the have-nots. The divide threatens to undermine the quintessence of the game: its unpredictability. Juventus is a serial champion at home. Manchester City dominates the Premier League. These clubs loathe the idea that soccer could be upwardly mobile. They don’t want to mitigate the financial disparity. Instead, they want to deepen it. The continent’s elite clubs had long dreamed of a Super League, perhaps alienating local fans but exploiting global fan bases to generate unprecedented revenue.

The timing of the launch could not have been more cynical: in the middle of an unprecedented global health crisis. Not that soccer has learned much from the pandemic. The industry still happily engages with questionable regimes such as Saudi Arabia acquiring Newcastle United. In the second half of the year, clubs and players began to tap into the sketchy market of cryptocurrencies, selling the industry’s latest venture as “fan engagement”.

“It always strikes me that soccer, and sports in general, is not an example to society, but simply a reflection,” says Szymanski . “The origin of crypto is money laundering and tax evasion. There is a very strong case for aggressive regulation by governments. One reason why the clubs are being engaged is that clubs are one of the few things that people have confidence in today. We are now disillusioned with pretty much everything, the one thing we believe in is our soccer club. But essentially, criminality lies behind all of this.”

He, rightfully, dismisses soccer’s new love for cryptocurrency but offers a more nuanced view on Saudi Arabia’s Public Investment Fund takeover of the Tyneside club.  “This problem is at the heart of globalization in general. Globalization has required Europeans and North Americans who embrace a particular system of morality, to deal and to engage with people who don’t necessarily share that morality.  And the question we’ve always had is how far do we go? And we’ve been willing to turn pretty much a blind eye to almost everything. There are some, you know, who draw the line at North Korea, but we don’t draw many other red lines.”

“The difficulty I find with saying we should do something about Saudi control and Newcastle is that – well, yeah, so shouldn’t we stop selling arms to Saudi Arabia as well? And shouldn’t we start controlling their ownership of properties in London? Shouldn’t we? It smacks of hypocrisy to say we’re going to do something about soccer when we’re not going to do anything about all the other ways in which we depend on them because we’re dependent on their oil. Why are we picking on soccer?”

But can the sport survive all of this? The past year was toxic at all levels of the game, more divisive, more tribal and more greedy than ever.  Soccer, once a public good, has been usurped by the market and state forces to become one of the most successful products of the last century. Will it ultimately withstand the actors that want to squeeze it for profit or use it as a geopolitical tool? Can it reposition itself as pure entertainment, vying for the attention of global audiences? Or is soccer on the way to self-destruction?

The last 12 months abundantly demonstrated that soccer needs an outside regulator.  The Premier League, the FA, UEFA, FIFA and its president Gianni Infantino, as well as other stakeholders are neither willing nor capable of regulating the game. Most of these organizations are both regulators and promoters of their own competitions, inevitably inviting conflicts of interest. In November, the Crouch report, the British government’s review of English soccer, recommended the creation of an independent regulator to deal with the game’s finances, club ownership and corporate governance.

Szymanski welcomes the Crouch report and emphasizes the need for fan representation on club boards, but pleads for deeper reflection and for transparency that would lead to far greater reform. Unfortunately, it comes down to what billionaires are up to.

He says: “I’m not advocating transparency for soccer clubs alone, I am saying transparency should be a national policy across all activities – banking, finance, property, etc. Let us know who is doing what,  give us the information, so that we know what’s going on. At least, you know, there’s a possibility that people might make decisions which take account of all the things that are going on. So that bad-faith dealing can be exposed. That is what rich people are really scared of, that’s the thing that frightens them more than anything else, the fact that you might find out what they’re up to.”