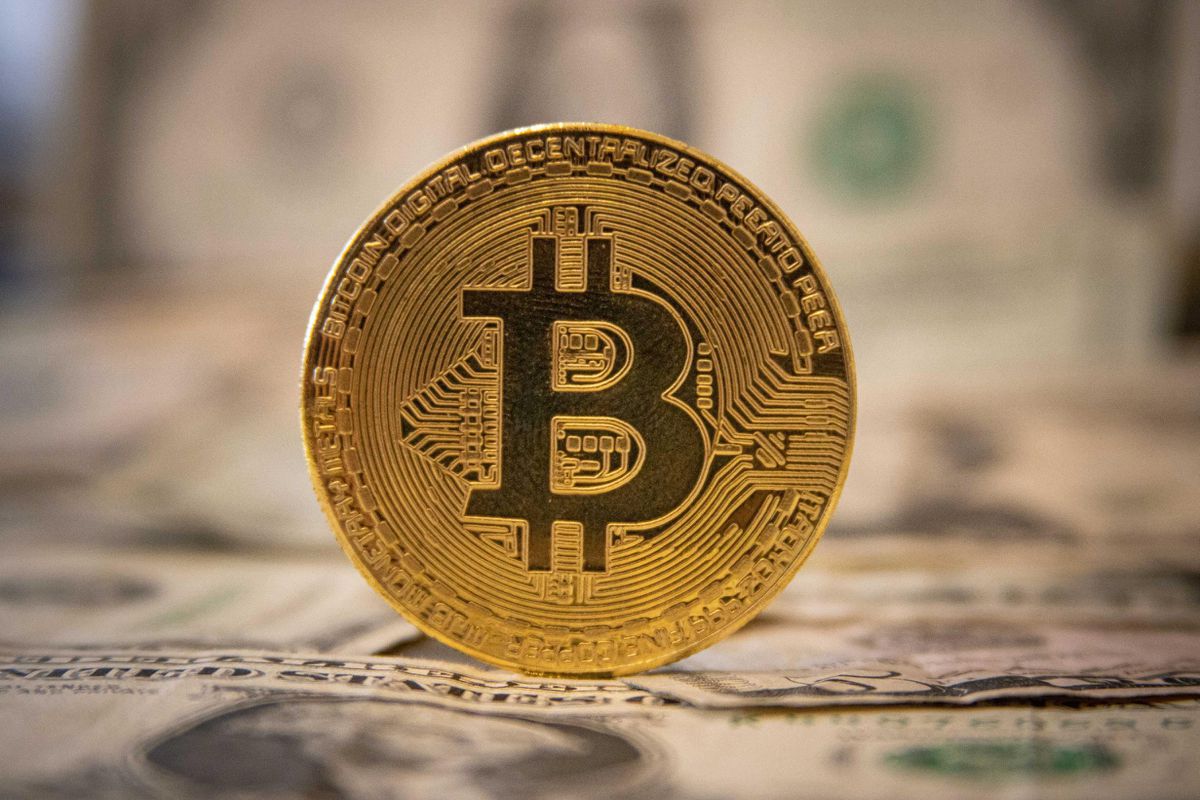 Bitcoin golden physical coin illustration on United States Dollar banknotes. Visual representations … [+] of the digital Cryptocurrency Bitcoin with the USD bill. Bitcoin with the symbol BTC, XBT is a popular digital currency that showed growth and is widely spread, accepted from banks, markets and other services and shops as ways of payments. The exchange rate today for 1 bitcoin blockchain is 34.588 US Dollar. On January 7, 2021 Bitcoin’s price crossed 40,000 for the first time and the next day on January 8, 2021 Bitcoin traded with the historical record price as high as $41,973 while the next day Price briefly fell as much as 26% but pared losses to trade around $33,400 whipping $200 billion of trade value from the cryptocurrency market in 24 hours according to American Financial media. Eindhoven, the Netherlands on January 13, 2020 (Photo by Nicolas Economou/NurPhoto via Getty Images)

The list of the biggest funding rounds in crypto history just got a new entrant near the top. Solana Labs, creator of top Ethereum competitor Solana just received $314 million from several investors, led by Andreessen Horowitz and Polychain Capital. The millions raised by Solana Labs will be used to create a venture investing arm, a trading desk dedicated to the Solana ecosystem, and support the development of new decentralized applications with the goal of drawing more people onto the blockchain and eventually reaching 1 billion users.

Of the 12 largest crypto-investments in history, six have been in 2021.

The payments and treasury infrastructure provider best known as one of the principal developers of the $22 billion stablecoin USDC raised $440 million from a large group of institutional and strategic investors. Circle’s platform has supported more than 100 million transactions by more than 10 million retail customers and over a 1,000 businesses, according to a statement. Circle also recently became Visa’s V V +0.2% partner to help businesses on the network settle transactions in USDC. Over the past year, USDC has supported over $615 billion in transactions as of May – a growth of more than 28,000% in the past 12 months.

VC round: Series B1

The world’s leading bitcoin mining hardware manufacturer, Bitmain also operates Antpool, one of the top bitcoin mining pools, accounting for 13% of bitcoin’s network hash, or computational, power. Shortly after the $422 million capital raise, the Beijing-based company filed for an IPO on the Hong Kong Stock Exchange in September 2018, but the offering fell through amid the bitcoin crash and market cooldown.

Founded in 2017, New-Jersey based BlockFi is now one of the leading cryptocurrency lending providers. Its products span multiple categories including crypto-collateralized loans and interest-bearing accounts through which investors can earn interest on their crypto holdings. Rumors of BlockFi’s potential IPO started to circulate last July following reports of a job opportunity, part of which involved helping the company go public.

Solana is a proof of stake blockchain challenger to leading blockchain Ethereum. The Solana team states that the blockchain delivers both scalability and speed. Solana is capable of processing more that 1,000 transactions per second (TPS), while Ethereum handles about 14 TPS, according to data from blockchair. To date, Solana has facilitated more than 19 billion on-chain transitions and hosts a range of decentralized products including Serum, a decentralized exchange founded by billionaire FTX founder Sam Bankman-Fried.

VC round: 5th round

The Vancouver-based startup is best known as the developer of NBA Top Shot, an NFT marketplace for basketball video highlights or “moments.” The project, which has already surpassed the $500 million mark in trading volume, is largely responsible for the boom of non-fungible tokens (NFTs), essentially digital proofs of ownership trackable on a blockchain. Earlier, Dapper Labs developed a popular Ethereum game of breedable collectibles called CryptoKitties.

Blockchain.com provides a variety of crypto services to retail and institutional clients but is most famous for its non-custodial digital wallets. Unlike its counterparts controlled by third parties, these wallets give users full control over their private keys that represent ownership of crypto assets. The London-based company claims it has processed 28% of all bitcoin transactions since 2012.

In February 2020, the crypto venture of ICE (the New York Stock Exchange owner) announced the acquisition of Bridge2 Solutions, provider of loyalty programs, to power Bakkt’s one-stop shop retail platform. Called Bakkt App, the service lets users aggregate various digital assets, including loyalty points, rewards programs, gaming assets, and cryptocurrencies, all in one wallet. In January, Bakkt announced it is going public via a SPAC merger with VPC Impact Acquisition Holdings at an enterprise value of about $2.1 billion. Upon the deal’s closure in the second quarter of 2021, the combined company will list on the New York Stock Exchange as Bakkt Holdings, Inc.

On February 25, the largest cryptocurrency exchange in the U.S. filed for a direct listing on the Nasdaq NDAQ stock exchange. Coinbase was valued at $68 billion, based on the recent filings. On March 19, the company was fined $6.5 million by the Commodity Futures Trading Commission (CFTC) over allegations of false transactions reporting and wash trading between 2015 and 2018 on its GDAX platform, later rebranded as Coinbase Pro. The exchange direct listing went live on April 14 under the ticker COIN.

Founded in 2014, Mexico City-based Bitso is the largest cryptocurrency platform in Latin America. It offers multiple crypto products and services to more than 2 million customers across Mexico, Argentina and Brazil. These include the Bitso App that lets users buy, sell, send or receive bitcoin and 8 other cryptocurrencies; Bitso Alpha, a professional-grade crypto trading platform; and Bitso Business, a suite of cross-border products for local enterprises. Bitso claims it has more than a 95% crypto market share in Mexico and more than a 60% share in Argentina.

Qulian Technology provides blockchain products for China’s major organizations and institutions, including the Ministry of Industry and Information Technology, the State Administration for Market Regulation, the State Grid, and local governments. Its one-stop blockchain open service BaaS platform, FiLoop, is used by some of the largest banks in China, including China Construction Bank, Agricultural Bank of China, and China Merchants Bank, according to the company. Qulian Technology’s partners also include Google GOOG and Microsoft MSFT

VC round: 2nd round

In September 2020, the Seoul Metropolitan Police Agency reportedly raided the offices of one of South Korea’s largest crypto exchanges on fraud allegations, linked to a $25 million token sale that never materialized and led to losses for investors.