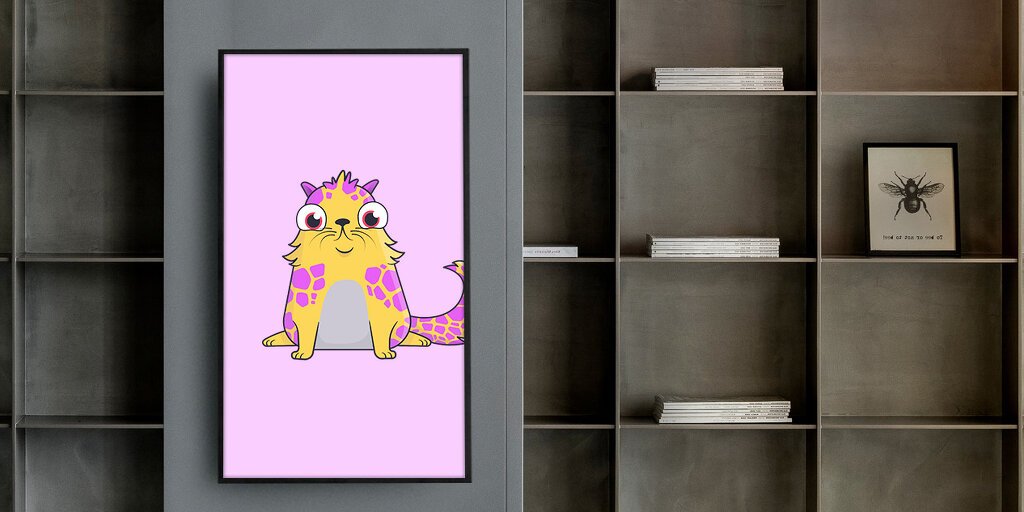 With NFT artworks becoming increasingly mainstream, buyers are looking for ways to display their collections. Qonos has launched a range of digital frames that can display NFTs in the home.

Non-fungible tokens (NFTs) are selling at outrageous prices. From the sale of the first-ever tweet at $2 million to a collection of art for $69 million, there’s plenty of money flowing about.

With the influx of big money, and increasing attention from the legacy art world, these unique digital tokens are well on the way to being considered luxury items. But unlike traditional art, there’s no easy way to display them in the real world. Sure, you can log in to your digital wallet and see them on your computer—but is that experience worth a million dollars? Crypto startup Qonos has built its business on the notion that there’s a better way.

The basic idea is a digital frame that can be hung on your wall and display your NFT art. You can choose to present your own NFT art, or showcase art from public collections (with attributions shown on the artwork as to who owns the art). Not only does the digital frame show visual art, it has built-in speakers to support audible NFTs too.

And so far, it’s been a success. Earlier this month, Qonos’s first batch of 2,000 digital frames sold out in 24 hours. Based on its current prices—from $999 to $1,499—that means it took in at least around $2 million in revenue.

The project was created less than a year ago by CEO Moe Levin, who has been running Bitcoin conferences since 2013 and helped with the launch of Ethereum in 2014. He kept hearing that his friends and art collectors were paying thousands of dollars for digital art but noticed that they would only display the art on their own computers or televisions—if at all.

Levin’s first thought was to get a Raspberry Pi—a small, inexpensive computer—and use it to program a TV, in order to connect to the Internet and display art. But it was too complicated. He was then put in touch with a Taiwanese company called Framed that builds digital frames with built-in computers. Qonos took this hardware and modified the accompanying software so that it would support NFTs.

The frame displays art from your digital wallet. Image: Qonos.

The frame supports Ethereum NFTs, along with those on the Bitcoin Cash blockchain via the Simple Ledger Protocol. You connect to the device from your computer or phone over WiFi, and connect it with your cryptocurrency wallet. It will then be able to display the NFTs that you own.

Plans for the future

Levin wants the Qonos frames to support more innovative forms of NFTs as they are created. In the near term, this will include programmatic NFTs. These change form depending on certain outcomes. For example, digital artist Beeple made an NFT that changed form to two potential outcomes depending on the US election result. This is written in code that the screen needs to decipher and display.

Another key feature will be a royalty platform. This will enable artists to have their work put into curated galleries. Qonos owners will be able to broadcast the galleries on their devices, and each artist will get paid royalties for the length of time their work is shown.

“It’s really a Spotify model but for art. We hope to see some artists be shown in hundreds of thousands of homes around the world and be paid for that,” Levin told Decrypt.

Levin argued that the combination of NFTs and hardware such as digital frames empowers artists to make money from people around the world—on top of the freedom that they have already realized through the sale of NFT artwork.

While NFTs have faced criticism for the environmental cost of the underlying blockchain, typically Ethereum, Levin stated that Qonos is a carbon-neutral company. This is achieved through the purchase of carbon credits. As for the carbon cost of the NFTs themselves, Levin said, “We’re not a part of that.”