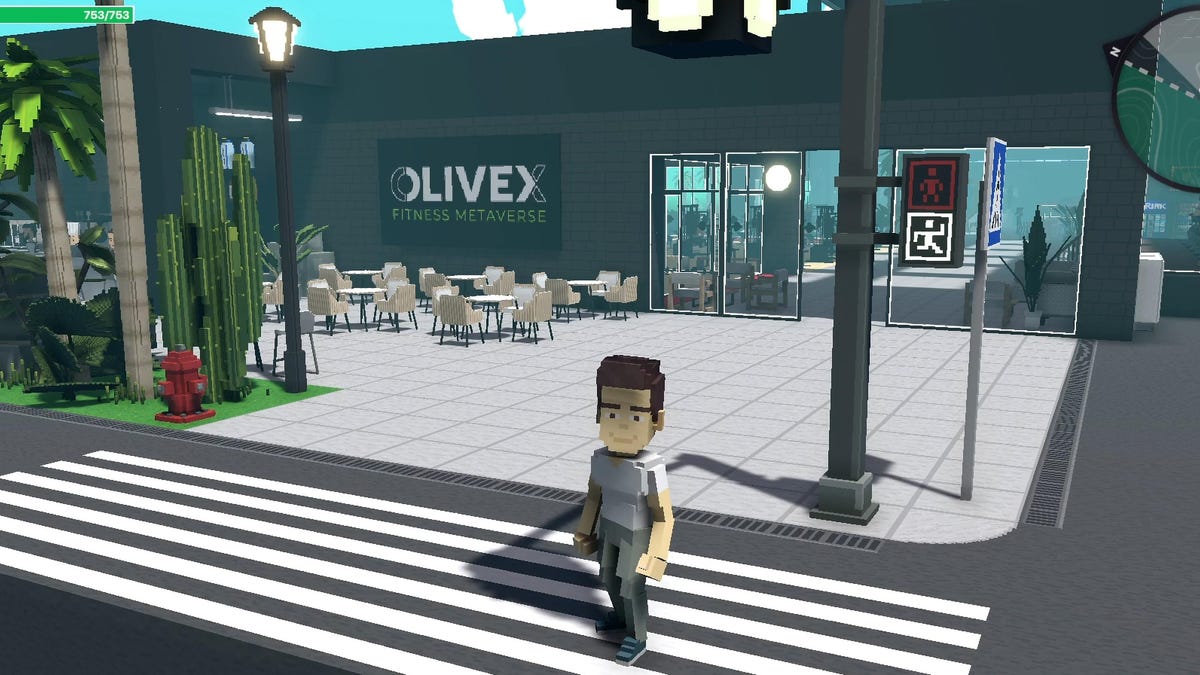 OliveX wants you to earn while you burn. The Hong Kong-based digital fitness company rewards players with crypto and NFTs as they flee marauding pirates and monsters across a dystopian wasteland.

Working out can be good for your belt line and your bottom-line at the same time. That’s the proposition OliveX is offering to the players of its mobile blockchain games.

Gamers can earn DOSE tokens and NFTs by completing missions within OliveX’s adventure game that requires them to run varying distances in the real world with their smartphones in hand. The virtual rewards they accumulate can be used to level up games, or to be traded on crypto exchanges and NFT marketplaces.

“Move-to-earn is a game changer,” Keith Rumjahn, the 37-year-old founder and CEO of OliveX, said in a video interview. “For the first time ever, players have true digital ownership of their games, and game developers also earn more because there’s no middleman. So it’s a win-win.”

OliveX said its strategy enables it to tap into three booming industries by combining physical fitness with mobile video games that incorporate blockchain technology. The company’s longer-term aim is to build an ecosystem of fitness games integrated with Animoca Brands’ metaverse title the Sandbox, a virtual world where players can build, buy and sell their in-game assets as they interact with other users and brands.

As NFTs continue to attract a growing mainstream audience, Rumjahn’s strategy appears to be well-timed. His Australia-listed company raised A$8 million ($5.7 million) through a share placement in November that was used to develop Dustland Runner, its first move-to-earn blockchain title that was launched in late March. Players take on the role of “dust runners” who are hired on a freelance basis to retrieve and then deliver mysterious contraband in a post-apocalyptic desert inhabited by bandits and monsters.

Dustland Runner is based on an earlier smartphone game called Zombies, Run!, which is said to have an average of 300,000 active users per month, of which roughly 50,000 are paid subscribers. Zombies, Run! was the creation of London-based game developer Six to Start, which was acquired by OliveX for $9.5 million in March 2021.

Now, OliveX is tapping into another newly acquired product design from fitness gaming platform Sol Cycle for the launch of its next title, Dustland Rider. The blockchain game, which could come as early as June, replaces running with cycling. After that, the company wants to incorporate more sports, such as boxing and rowing, and begin using motion detection technology in games.

“Our mission is to onboard a billion people,” Rumjahn said. “In doing so, I want them to earn their first NFT and crypto token through exercising.”

OliveX’s decision to jump on the crypto bandwagon has grabbed investors’ attention. The company saw its market cap doubled over the past year to its current level of A$190.5 million. OliveX reported A$1.3 million in revenue in the six months ended December, a 10-fold jump compared to the same period last year. Its net loss narrowed 55% year-on-year to A$2.3 million. OliveX said it’s mulling plans for a second listing in Canada.

OliveX is a spinoff of Animoca Brands, the Hong Kong-based gaming and blockchain powerhouse that was valued at $5.4 billion during its latest funding round in January. Animoca said its portfolio has grown to more than 170 investments in NFT-related companies and decentralized projects including Dapper Labs, the developer of pioneering blockchain game CryptoKitties, as well as Sky Mavis, which made the Axie Infinity online game.

OliveX said it is now constructing a virtual fitness world in the Sandbox, which will allow players to bring their NFT rewards from the Dustland series into the wider metaverse platform. The virtual land will feature companies including German fitness apparel retailer Gym Aesthetics, British playground manufacturer Playinnovation, boutique fitness studio operator Trib3 and others. These partnerships help traditional brands pivot into what could be the future of the internet, while OliveX in turn gets to reach not just crypto users, but also exercise enthusiasts who have yet to have knowledge of the emerging technologies, Rumjahn said.

“In this fitness metaverse where everything is interconnected, I can play my first game and keep the weapons, and I can continue to use them in multiple games,” he said. “How cool would that be? That’s the dream we want to build.”

Interest in the metaverse soared after Facebook rebranded itself last October as Meta as part of its strategy to focus on the internet’s “next frontier.” The metaverse became Wall Street’s newest buzzword as investments poured in from global tech giants like Microsoft and Google, as well as leading gaming companies including Epic Games and Roblox. Even top consumer brands like Nike, Disney and Gucci are now rushing to establish a presence in the metaverse.

Some analysts have already begun publishing estimates of the market’s size. Grayscale said in a report in November that the metaverse will develop into a trillion-dollar sales opportunity across advertising, social commerce, digital events and other categories, but it neglected to mention a timeframe for that figure. Goldman Sachs is even more bullish. The investment bank said in January that the digital realm could reach a whopping $8 trillion in revenue.

Fitness applications will account for a “really, really large market” in the metaverse because people always invest in their health, especially when the pandemic has boosted their health consciousness, said Allen Ng, cofounder and CEO of Everest Ventures Group, which invested in OliveX. Ring Fit Adventure, a video game developed by Nintendo that combines exercise with role-playing, saw its sales reach 7.4 million between April 2020 and March 2021, when the coronavirus outbreak closed gyms and kept people stuck at home, according to the Japanese company’s earnings report.

“When Rumjahn came to us and said they can combine the crypto and blockchain elements together with the fitness market, we felt like that makes perfect sense. It’s like combining two of the fastest growing markets together.” Ng said. “The potential is enormous and the space is in its early stage, so OliveX has a good shot of becoming the leader of this space.”

OliveX is launching its blockchain cycling game, Dustland Rider, as early as June.

Established in 2017, OliveX was originally a subsidiary of Animoca Brands that developed fitness apps and interactive mirrors for working out. The company is headed by Rumjahn, a Chinese-Canadian basketball trainer and software developer who first found success when he created CoachBase, an app for diagraming and sharing plays. OliveX spun off from Animoca after raising A$2.2 million in an initial public offering on Australia’s National Stock Exchange in August 2020.

OliveX’s first foray into the crypto space was an app that rewarded users with digital tokens for performing squats in 2018, but the business struggled because cryptocurrencies weren’t widely used at the time.

Rumjahn said it’s important to design “game sinks” that keep users engrossed in the activity supported by a well-designed economy where they can spend money as part of a sustainable system.

“The next ten years will be blockchain and crypto,” Rumjahn said. “Within the last year or so, you’ve seen the user adoption of NFTs and crypto really goes up…We moved from being an early adopter to the mainstream, and based on that, we think this is the time to do it.”