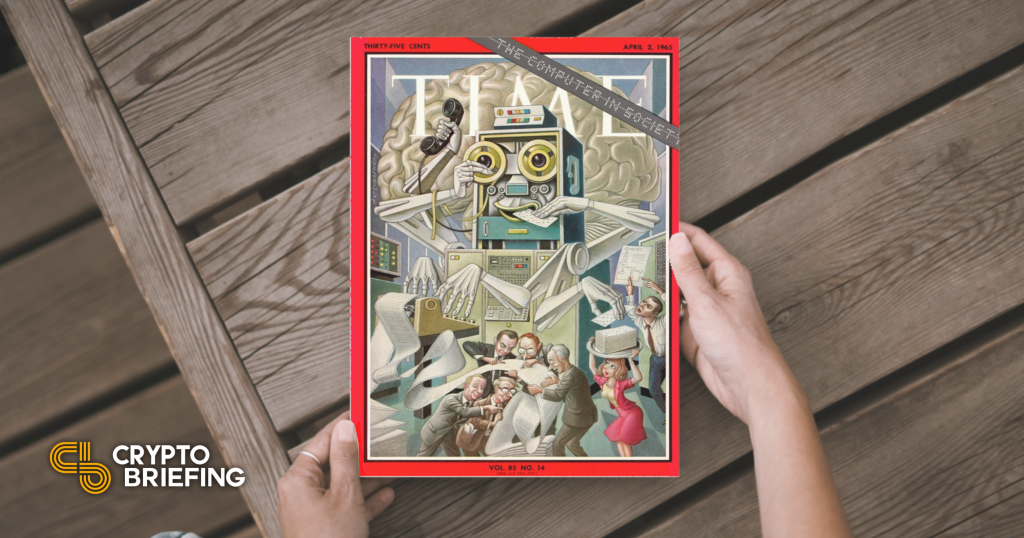 TRON founder and CEO Justin Sun has purchased one of TIME Magazine’s NFTs for more than $200,000 in ETH. The cover in question is 1965’s “The Computer In Society.” In recent weeks, Sun has also purchased Beeple’s “Green” NFT, a Warhol, and a Picasso for his NFT fund.

TRON founder and CEO Justin Sun announced today that he has placed the winning bid on one of TIME’s non-fungible tokens.

On Mar. 22, TIME Magazine announced a series of three non-fungible tokens (NFTs) themed around its 1966 “Is God Dead?” cover. In the days that followed, the magazine auctioned six more covers.

Though the original covers were once in mass production, each tokenized digital version is a one of a kind collectible.

Sun specifically purchased the NFT token corresponding to the cover of TIME’s Apr. 2nd, 1965 edition, which is titled “The Computer in Society” and is drawn by Boris Artzybasheff. Sun paid more than $200,000 in ETH for the item when its auction ended on Wednesday.

TIME created its NFTs on the Ethereum blockchain through the blockchain firm Superrare. However, Sun says that he will put the token in his own NFT fund and issue it as a token on the TRON blockchain. That implies the NFT will be up for auction again soon.

Sun has won a number of NFTs to date. On Mar. 23, he announced that he had purchased Beeple’s “Green” NFT art.

On Mar. 29, Sun announced his own NFT fund, which will focus on purchasing and tokenizing art pieces worth at least $1 million and with a median value of $10 million.

Sun revealed yesterday that he had purchased a Picasso and a Warhol painting. Though published on April Fool’s Day, the news appears to be legitimate: the sale of those paintings were confirmed by Bloomberg yesterday with statements from Christie’s.

Justin Sun, one of crypto’s most controversial figures, has his sights set on the NFT market.  Justin Sun Launches JUST NFT  Justin Sun, the founder of the TRON blockchain, is…

Who Is Justin Sun? The Entrepreneur Behind TRON

Justin Sun, the 29-year-old entrepreneur behind Tron, has been a controversial figure in the crypto industry, often evoking mixed reactions to his publicity stunts and outspokenness on social media. Nonetheless,…

What Is Tron? Introduction To TRX

What Is Tron? Tron (TRX) is a blockchain platform launched as the foundation for a decentralized entertainment ecosystem. Created by controversial figure Justin Sun, Tron focuses on expanding the market…

What Are Non-Fungible Tokens (NFTs)?

Tokenization is well-suited for commodities like fiat currencies, gold, and physical land. A fungible asset’s representation on blockchain makes commodities tradable 24/7 via borderless and frictionless transactions. Fungible goods are…