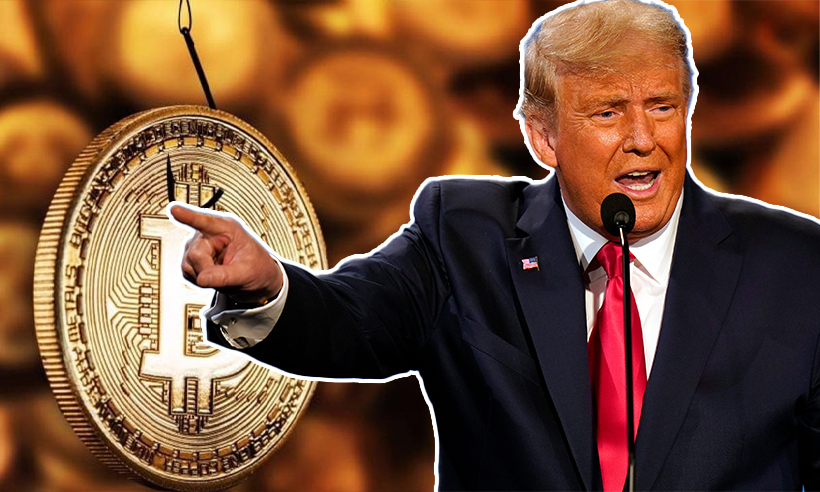 Former President Donald Trump fired a fresh salvo at Bitcoin, urging U.S. regulators to monitor the digital currency. Trump appeared on the Fox Bussiness Network for an interview with Stuart Varney on Monday. During the interview, he claimed that bitcoin is a “scam against the dollar.”This isn’t the first occasion when Trump has voiced his criticism publicly. The businessman is known for his strong opposition and dislike of the primary cryptocurrency.

As Bitcoin is Slammed again, Crypto Prices Drop by 1.3%

In a reiteration of his anti-cryptocurrency stance, Trump emphasized that Bitcoin “just seems like a scam”. He also advocated for its increased monitoring, saying that it should be regulated “very, very high.”

Trump also doubled down on his support for the dollar hegemony  He believes that Bitcoin is just another currency threatening the status of the dollar.

“I don’t like it because it’s another currency competing against the dollar … I want the dollar to be the currency of the world. That’s what I’ve always said.”

TRUMP: Bitcoin, it just seems like a scam. I don’t like it. I want the dollar to be the currency of the world. pic.twitter.com/CXjALsJmXx

Shortly after the interview was aired, Bitcoin prices registered a dip of more than one percent. The digital currency fell from $36,472 to $35,973.

Back in July 2019, Trump revealed that he disliked Bitcoin and other cryptocurrencies due to their volatile nature. He stated that they “are not money” and their value was based on “thin air.” He also ordered his administration to enact policies against the crypto market. During its final days, the Trump administration released a proposal to restrict U.S. exchanges from dealing with self-hosted wallets. According to a book authored by former National Security Advisor, John Bolton, Trump personally told former Treasury Secretary Steve Mnuchin to “go after Bitcoin”.

Cryptocurrencies are currently reeling under pressure due to heightened scrutiny by authorities. The Biden administration is looking to plug loopholes in crypto-related tax dealings. And a barrage of ransomware attacks has given critics much-needed fodder, shifting the focus of the dialogue on the future of digital currencies.